Fale a língua do mundo. Faça Wise Up.
Fri 22 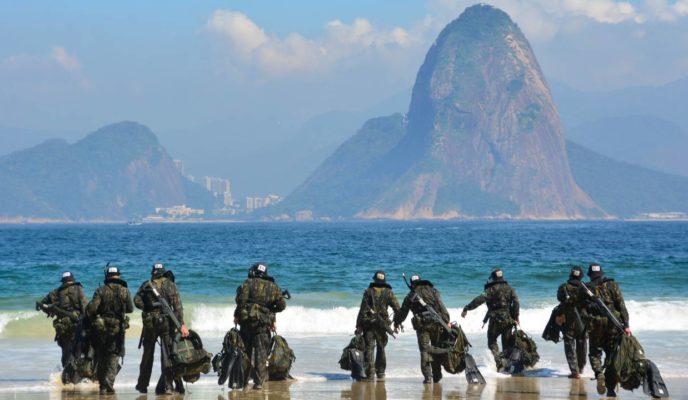 Brazil has risen to the 13th position in the annual ranking of military powers compiled by GlobalFirepower magazine, surpassing Iran. The hacker accused of breaking into the cell phones of public officials and authorities and leaking private conversations of members of the Operation Car Wash taskforce to the press has signed a deal with the Federal Police to turn state’s evidence. TV host Gugu Liberato has suffered a fall in his home in Orlando, Florida, and is currently in the intensive care unit of a local hospital; his press office released a statement denying rumors about his death. Also in Florida, but in Miami, Rabbi Henry Sobel died after complications caused by a lung cancer; Sobel had an important role during the military dictatorship days in Brazil in his defense of human rights. Finally, Tesla released publicly an electric pickup, but the alleged bulletproof window was shattered during the presentation ceremony, much to the embarrassment of the company’s CEO, Elon Musk.

Brazil reached the 13th position in the ranking of military powers compiled by GlobalFirepower magazine, which has been assessing for 14 years 137 countries according to their military strength. The survey takes into consideration the size of each country’s armed forces in terms of personnel and vehicle, their Defense budget, infrastructure, and geography. In the 2019 edition Brazil rose one position and surpassed Iran, becoming the main military force in Latin America. The countries heading the list ahead of Brazil are the United States, Russia, China, India, France, Japan, South Korea, the United Kingdom, Turkey, Germany, Italy and Egypt.

Luiz Henrique Molição, one of the hackers accused of breaking into the cell phones of several public authorities and government officials in order to leak to the press messages of members of the Operation Car Wash taskforce, has signed a deal with the Federal Police in order to turn state’s evidence. According to Veja magazine, he agreed to identify three other people who took part in the cyberattacks and hand over private conversations stored in servers outside Brazil, along with the cell phone he used to leak the messages. The police are hoping to establish whether there was a chain of command behind the hacking, responsible for planning the attack.

Rumors about the death of Gugu Liberato are “unfounded”, according to press office

TV host Gugu Liberato is in the intensive care unit of a Florida hospital after suffering a fall at his Orlando home. According to Liberato’s press office, he is under constant observation by the local medical team. “The information which has been circulating concerning the alleged death of the TV host is unfounded,” read the statement released by them on Thursday evening. Relatives of Gugu arrived in the United States on the same night and will discuss his condition with the doctors before releasing a new medical bulletin.

Rabbi Henry Sobel died at the age of 75 in Miami, Florida, from complications caused by a lung cancer. An emeritus rabbi of the São Paulo Israeli Congregation, Sobel became famous as “a strong voice in defense of human rights in Brazil,” according to a statement released by his family. Henry Sobel had a decisive role during the Brazilian military dictatorship in clearing the circumstances involving the death of journalist Vladimir Herzog, contradicting the official version that he had committed suicide in a police cell, and authorizing the former Cultura TV director to be buried in the Butantã Israeli Cemetery according to the proper Jewish rites.

US automotive and energy company Tesla unveiled yesterday its long-awaited electric pickup. Greeted with applause on account of its futuristic design, the Cybertruck drew attention for looking like a mixture of the DeLorean in the movie “Back to the Future” and the Lotus Esprit which doubled as a submarine in the 1970s James Bond movie “The Spy Who Loved Me”. The presentation, however, had an embarrassing moment: as the resistance of the car’s new “unbreakable glass” was being tested, a metal ball was fired at the window, shattering it. “There’s room for improvement,” said Tesla CEO Elon Musk, among laughter and curse words.