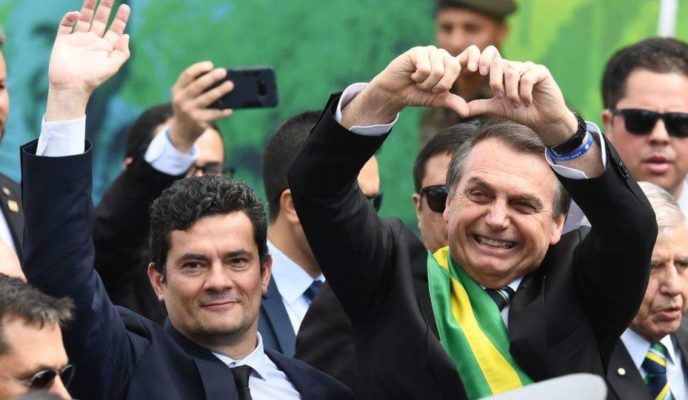 The anticrime bill presented by Justice and Public Safety minister Sergio Moro to the Brazilian Congress has been approved by the Senate, and depends only on president Jair Bolsonaro’s ratification to officially become law. The Brazilian president has backed down from his belligerent stance against his newly-elected Argentinian counterpart, Alberto Fernández, and declared in an interview he would gladly welcome the neighboring head of state if he wishes to visit Brazil. The two shooters who went out on a shooting spree in Jersey City before being killed during a standoff with police officers were members of a hate group and deliberately targeted a Jewish kosher market, according to local authorities. A group of militants in cars and on motorbikes broke into a military base in the African nation of Niger, killing at least 70 soldiers and wounding several others. Finally, India’s Parliament is voting a controversial bill which will make it easier for refugees from neighboring countries to obtain Indian citizenship, but explicitly excludes Muslims; the measure has been seen as part of a radical Hindu agenda, and sparked controversy and protests.

On Wednesday evening, an overwhelming majority of the Brazilian Senate approved the anticrime bill drafted by Justice and Public Safety minister Sergio Moro and Federal Supreme Court Alexandre de Moraes, which proposes a series of changes to the penal code. While the Lower House of Congress took 10 months to discuss and vote the proposals, the Senate voted the issue in less than one week. The text of the bill was significantly altered by congressmen, who removed several of Moro’s proposals, such as the possibility of plea bargains and law enforcement justification provisions. The bill must now be ratified by president Jair Bolsonaro in order to become law.

In a gesture of good will, Brazilian president Jair Bolsonaro declared in an interview he is willing to welcome Argentina’s newly-inaugurated president, Alberto Fernández, if he decides to visit Brazil: “If he wishes to visit us, I’m at his disposal. He is invited, if he wants to come to Brazil, we will be glad.” Bolsonaro actively supported the candidacy of former president Mauricio Macri, who was seeking reelection, while Fernández openly expressed his dislike of the Brazilian leader’s views and showed his solidarity with former Brazilian president Luiz Inácio Lula da Silva, recently released from prison after a controversial Supreme Court ruling.

The two shooters who were killed during an hours-long standoff with police officers, which left four other people dead in Jersey City on Tuesday, deliberately chose a Jewish kosher supermarket as their target, said the local mayor in an interview. The criminals, who allegedly belonged to an anti-Semitic organization, began their shooting spree at a cemetery, where they killed a veteran policeman, and then drove a stolen van to the Jewish deli, where they resumed their attack. Local authorities had initially ruled out terrorism, but the criminals have been linked with the Black Hebrew Israelites, which has been labeled a hate group.

At least 70 killed in Niger military base attack

A caravan of armed men ambushed a military base in the African nation of Niger, killing at least 71 soldiers stationed there. The attack has all the hallmarks of radical Islamic groups operating in the region, according to the country’s Defense minister. It was the most deadly attack against the nation’s security forces in history. President Mahamadou Issoufou quickly returned from a trip abroad, and declared his concern with the rapid advancement of extremists linked to Al-Qaeda and ISIS in his country. The attackers arrived in cars and on motorcycles and used explosives to break into the army base; several soldiers were also wounded, and some are still missing.

A Citizenship bill currently being voted by the Indian Parliament to fast-track citizenship to members of religious minorities from neighboring countries which explicitly excludes Muslims has been causing widespread controversy and protests in the country. After hours of deliberation, the Lower House approved the Citizenship Amendment Bill – the latest step in prime minister Narendra Modi’s nationalist Hindu agenda; the bill must now be approved by the country’s Upper House. The bill will grant citizenship for Hindu, Sikh, Buddhist, Jainist, Parsis, and Christians fleeing religious persecution in Afghanistan , Bangladesh, and Pakistan. Muslims are explicitly excluded from the legislation.