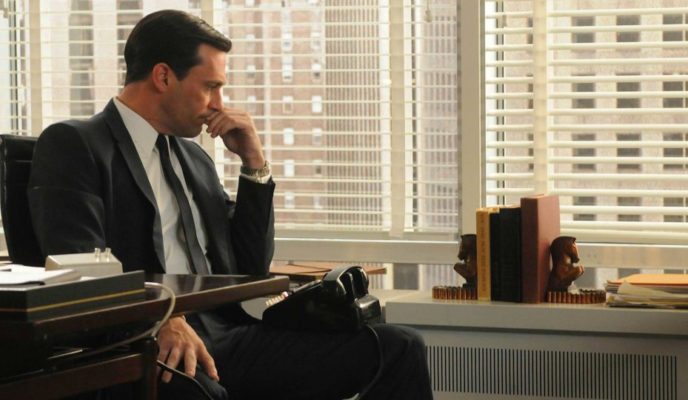 Cinema is nowadays one of the fields where imagination blossom. But in the last few decades a new form of artistic expression became stronger, explored in depth issues, expanded narrative modes. Television series – whether in free-to-air TVs, cable TVs, or even in the current streaming systems – have opened up a new market, in which creators found new room for creative freedom.

One of the most interesting and attractive aspects of the series compared to other forms of audiovisual narratives is the bigger time they have to develop their stories: the narrative arcs extend for several episodes, and, therefore, the events, personal dramas, and individual decisions, gain more depth, reflection, and intimacy.

And it doesn’t matter if these narratives are happening inside a family home in Los Angeles or in the European theater of World War II, or even in the near future – the important aspect is that they seek to portray the intimate, interior lives of their characters.

By making these portraits of intimate life, the authors are preserving and cultivating this same intimate lives enriched in our realities. And, by doing that, they remind us that work, the daily labor, is no longer a question of the need to survive, to obtain subsistence, but a source of “free time”, in which we find room for solidarity, which leads us in turn to creativity, comfort, and dignity.

These series teach us, after all, that there is time to take care of those who are gone, and create the future, that it is possible then to see oneself as a member of a community no longer limited by its biological reality, but expanded in the past and into the future. And conservatism is the agglutinating element that allows societies to obtain this expansion within their relations. Expansion of their own conscience as a community.

If that sounds abstract, or incoherent, here’s one line from the HBO series “John Adams”, starring Paul Giamatti as one of the most important ‘founding fathers’ of the United States:

“I must study politics and war that my sons may have liberty to study mathematics and philosophy. My sons ought to study navigation, commerce and agriculture, in order to give their children a right to study painting, poetry, and music!”

Therefore, if we have the privilege of studying and enjoying painting, poetry, music – art, in all its forms – let us celebrate by watching and sharing these series, which do so much to remind us of our intimate lives:

Why it is conservative: One of the first television series to explore and dive into the importance of family ties in our lives. To follow the story of the Salinger siblings, and the paths which led them into their personal growth, is to share the uncertain beauty of life.

Why it is conservative: By portraying the story of a group of US paratroopers from their training days until the end of the Second World War, the series Band of Brothers present us not only a reflection on honor, courage, and perseverance, but also on friendship and the human spirit.

Why it is conservative: The adaptation to the small screen of one of the most beloved Marvel characters was able to dive into Matt Murdock’s conscience pangs, arisen from his Catholic faith.

Why it is conservative: Peter Morgan’s series about the life of Queen Elizabeth II is a true television miracle. Not just due to the care taken with its production, but especially for raising discussions and reflections on the monarchy, the good government, the dynamics of modern politics, and, last but not least, the price one pays for power.

Why it is conservative: The outstanding series created by Julian Fellowes is a perfect example of the ‘intimate life’ I spoke earlier. A portrait of life and aristocracy in early 20th century England – and one that is useful for us to see how much we changed, but remained the same.

Why it is conservative: Starred by Paul Giamatti and Damian Lewis, Billions shows us how greed, envy, and power corrupt the souls of men. And it doesn’t matter which side you are on in this war, whatever remains of our conscience will always pay a price.

Why it is conservative: David Simon probably would punch me in the face if he found out I placed The Wire in this list. But The Wire rises above any and all ideological categorization, precisely for realizing that, beyond the deceptions of politics, the sociological ghettos, and the ideological misery, there is a frail intimate life which deserves our care.

Why it is conservative: By portraying the life of one of the United States’ ‘founding fathers’, the HBO series is a true lesson on politics, and shows us how these great – and flawed – men have shaped the incipient American democracy.

Why it is conservative: Behind mere “detective stories”, the series created by Nic Pizzolatto presents in its narratives an outstanding reflection of the problem of Evil and the sovereignty of Good.

Why it is conservative: The Alan Ball series presents us the dramas of the Fischer family and their relationship with the most undesirable of guests: Death. In each episode we see how this visitor is always lurking around and shaping our lives.

Why it is conservative: By portraying the social changes in the 1960s United States, Matthew Weiner is able to develop a story about our dreams, desires, and hopes, in a new time of the world.

Why it is conservative: The HBO series reflects for three seasons on nothing more than the Apocalypse and our final doom!

Why it is conservative: Going on its tenth year, The Walking Dead is still raising questions about what makes a good society, the faith that sustains us, and the relationship between the living, the dead, and the unborn. A true treatise on human nature.

Why it is conservative: Based on the homonymous Coen brothers movie, Noah Hawley’s series broaden and deepen the original subjects, presenting a more hopeful view on our eternal struggle against Evil.

Why it is conservative: Shane Meadows uses his personal life as a basis for this English series (which originated from a homonymous movie), and, by portraying the life of young skinheads in the 1980s England, present us a work that surpasses all categorizations. One of the few series which may be compared to David Simon’s masterpiece – The Wire!