Fale a língua do mundo. Faça Wise Up.
Thu 20 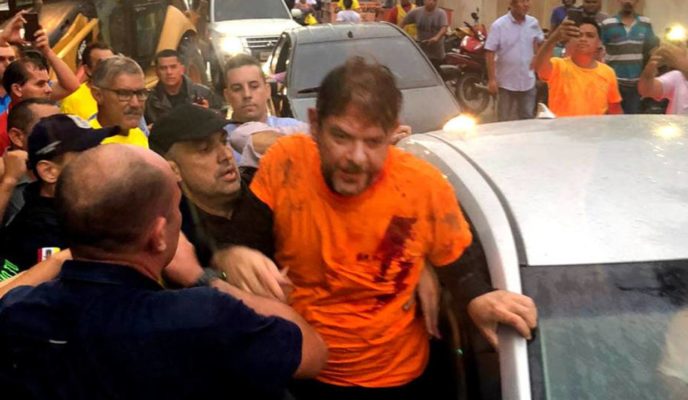 Brazilian senator Cid Gomes was shot twice after trying to ram a backhoe through a barricade during a strike by Ceará state police officers. Gomes, brother of former presidential candidate Ciro Gomes, was quickly rushed to a local hospital. One of the most iconic directors and actors in Brazil’s film industry, José Mojica Marins, better known to audiences as his character Zé do Caixão (Coffin Joe), has died at the age of 83. An attack at two shisha bars in the German city of Hanau has left nine people dead and several others wounded; authorities managed to track a car used during the incident, leading them to an apartment with the bodies of the suspect and his mother in it. Seventeen Brazilian citizens deported from the United States after trying to illegally cross that country’s border with Mexico have landed at the Belo Horizonte International Airport. Finally, Brazil’s taxpayers have been paying for ex-president Luiz Inácio Lula da Silva’s foreign trips, including his latest visit to the Vatican.

56-year-old Brazilian senator Cid Gomes, brother of former presidential candidate Ciro Gomes, was shot twice in the chest in the city of Sobral, Ceará, on Wednesday afternoon, during a confrontation with police officers on strike. Cid, a former governor of the state, tried to ram a backhoe through a metal gate used as a barricade by a crowd of balaclava-clad officers who were protesting for higher salaries. The vehicle’s cabin was promptly hit by several shots, and the politician was quickly rushed to a local hospital. Justice and Public Safety minister Sergio Moro authorized the deployment of the National Public Security Force in the state to try to curb the crisis caused by the mutinous state police officers.

Brazilian cult moviemaker José Mojica Marins, popularly known by his main cinematic character, Zé do Caixão, died on Wednesday at the age of 83. Born in São Paulo in 1936 in a family of circus artists, Mojica first got a camera when he was 12, and five years later began producing amateur films. After dabbling with several movie genres, he discovered his true knack for horror movies, and incorporated a sinister character: Zé do Caixão, or Coffin Joe, as he was known to international audiences. Famous for his huge fingernails, top hat, and black cape, he directed 40 films and starred in more than 50, becoming a nationwide icon.

Shooters left at least nine people dead and several wounded in Hanau, Germany, on Wednesday evening, according to the local police. Local authorities launched a major manhunt, and, after following a car involved in the incident, found a 43-year-old man dead at his apartment, along with his mother’s body. The shootings happened around 10 p.m. local time, in two so-called “shisha bars”, where Asian immigrants usually gather to smoke flavored tobacco in shishas or hookahs. German tabloid Bild says some of the victims have a Kurdish background.

Seventeen Brazilians deported by the Trump administration arrive in Brazil

The fourth flight this year coming from the United States with Brazilian citizens deported after being caught trying to enter the country illegally through the border with Mexico landed yesterday in Belo Horizonte with 17 people aboard – 77 less than expected. The Brazilian Federal Police had said that 94 people would be on the plane, but airplane officials could not explain the discrepancy in the number of passengers. According to BH Airport, 353 people who have tried to cross US borders illegally have already been returned to Brazil, on other flights. The first one arrived at Confins Airport with 70 people on October 26th.

Taxpayers are paying for Lula’s trips, including pope visit

During his first 100 days of freedom after spending 580 days in a prison cell in Curitiba, former Brazilian president Luiz Inácio Lula da Silva has cost the country’s taxpayers around R$ 100 thousand on 248 hotel fees and plane tickets for public servants in his entourage. All extra expenses added, such as salaries, fuel, and official cars, amounts to a total of R$ 300 thousand that came from the taxpayers’ pockets. On Lula’s recent trip to visit pope Francis at the Vatican, the total cost with administrative and security personnel was R$ 21.5 thousand (and plane tickets were not entered in the official ledger sent to the President’s General Secretary).