Fale a língua do mundo. Faça Wise Up.
Thu 19 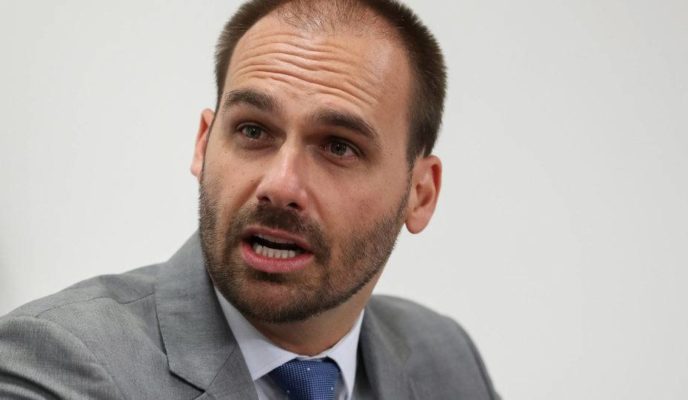 A representative of the Chinese Embassy in Brazil has used their official Twitter account to answer a series of tweets by the Brazilian president Jair Bolsonaro’s son, federal congressman Eduardo Bolsonaro, causing what may become a diplomatic spat between both countries. Millions of citizens in several large cities throughout Brazil have banged pots and pans from their windows and  balconies to protest what they and most of the media have perceived as Bolsonaro’s failure to take the threat of the novel coronavirus seriously. According to the Brazilian Ministry of Health, more than four deaths have been confirmed so far in the country, along with nearly 500 confirmed cases. The president of the Brazilian Senate, Davi Alcolumbre, has been tested positive for the coronavirus, and even though he claimed to feel no major symptoms, he retired to home isolation. Finally, the parliament of New Zealand has approved a bill which virtually legalizes abortion in the country, sparking fierce opposition from right-wing politicians and several sections of society.

The Brazilian president’s son, federal congressman Eduardo Bolsonaro, may have started a diplomatic crisis with China, Brazil’s biggest commercial partner. Yesterday, the member of Congress used his official Twitter profile to comment on the coronavirus pandemic: “Everyone who watched Chernobyl will understand what happened. Just replace the nuclear plant for the virus and the Soviet dictatorship for the Chinese one,” adding “the fault lies with China, and freedom is the solution.” The Chinese Embassy in Brazil promptly used its official Twitter account to reply: “Your words are extremely irresponsible and sound familiar to us. They seem an imitation of your dear friends. When you came back from Miami, you have unfortunately contracted a mental disease, which is infecting the friendship between our peoples.”

Millions bang pots and pans to protest against Bolsonaro

For the second consecutive day, millions of citizens throughout Brazil have expressed their dissatisfaction at the dismissive way in which president Jair Bolsonaro has been handling the novel coronavirus pandemic in their country and banged pots and pans from windows and balconies in several major cities. Videos and pictures were promptly uploaded to all major social networks. “We have to understand any popular manifestation, whether in the streets or at home, like banging pots, as the pure manifestation of democracy,” said Bolsonaro a few hours before the protest, during a press conference at which he wore a surgical mask along with members of his ministerial cabinet.

After some delay compared to their usual schedule during the previous days, the Brazilian Ministry of Health updated its data on the platform with the novel coronavirus advancement throughout the country. According to information released on Wednesday, 8 p.m., more than four deaths had been confirmed and the number of infected patients had risen from 291 to 498. The number of cases under investigation also rose to 11,278, and the number of dismissed cases totaled 1,841. Most confirmed cases are still centered in the state of São Paulo, with 240 people being monitored.

The president of the Brazilian Senate, Amapá senator Davi Alcolumbre, has been tested positive for the novel coronavirus. The information was released on Wednesday afternoon by the Senate president’s press office, which also informed he had taken the test on the previous day. Alcolumbre had been tested on a previous occasion, and the results were negative. According to the Senate press office, Alcolumbre is “feeling well” and is currently in home isolation, with no “severe symptoms.” The president’s son, federal congressman Eduardo Bolsonaro, promptly posted criticism at the senator on his social media accounts: “Will he make some sort of self-criticism now?”

The New Zealand parliament approved on Wednesday a bill which decriminalizes abortion and allows the voluntary interruption of any pregnancies of up to 20 weeks of gestation. The bill alters a previous 1977 legislation, which established that two doctors were needed to approve an abortion, and only if they agreed there was a “serious risk” for the mother. The controversial bill was approved by 68 votes to 51, after the possibility of a public referendum was abandoned during the debate. According to Labour Party representative Andrew Little, “the current framework requires women seeking an abortion to maintain a fiction about their mental health.” Simeon Brown, a National Party lawmaker, opposed the bill: “I’m opposed to the bill not because of the tenets of any religion but because of scientific, philosophical and ethical principles.”