Fale a língua do mundo. Faça Wise Up.
Tue 18 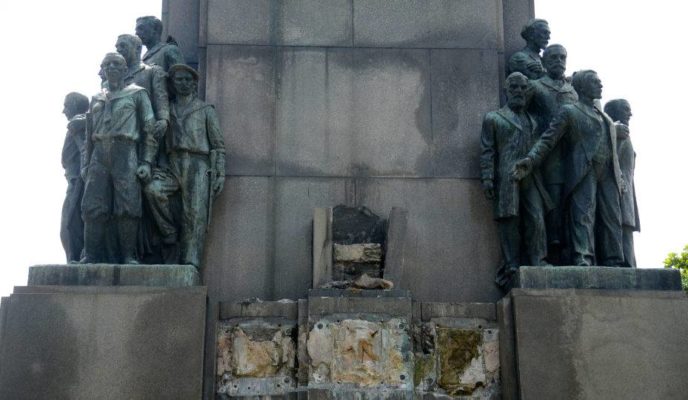 A 400-kg statue was stolen from a monument in the historic downtown of Rio de Janeiro. The Brazilian Ministry of Education has ruled that several additional payments, such as overtime and night-shift premiums, will no longer be paid to federal university professors. An amendment currently being discussed by the Brazilian House of Congress could allow a drastic reduction from 80 to 50 percent in the area covered by native forests and protected by law. Venezuela suspended all flights from Portuguese airline TAP, after self-proclaimed president Juan Guaidó’s uncle was allegedly found with explosives as he arrived in the country. Finally, US tech giant Apple has warned that the coronavirus epidemic is likely to hamper the company’s production, since most of its products are manufactured in Chinese industries.

The Civil Police is investigating the theft of a 400-kilogram, two-meter high statue stolen from a monument in downtown Rio de Janeiro. The statue is part of a tribute to Brazil’s first president, Army marshal Deodoro da Fonseca. The bronze sculpture depicted the officer’s mother, Rosa Paulina da Fonseca. According to the police, an investigation is underway to identify and arrest the culprits. The Rio de Janeiro Monument and Fountain Management Office explained that, in such cases, a budgetary survey is carried out in order to start a private bidding auction that will contemplate the restoration and replacement of the stolen statue.

The Brazilian Ministry of Education has ruled that federal universities and institutes throughout the country will no longer provide overtime, night-shift premium, or progression payments for their professors and teachers. The veto also applies to any decision which increases expenses on both active and retired public servants. According to the memorandum sent by the ministry to all public institutions, the decision is due to the new figure approved by the Brazilian Congress for salary payments, which dropped from R$ 74.6 billion to R$ 71.9 billion. The remaining amount depends on the issuing of additional credit by members of Congress.

An amendment made in Provisional Presidential Decree no. 901, currently being discussed by the Brazilian Lower House of Congress, would allow a reduction of the area covered by native forests in the states of Roraima and Amapá from 80 percent to 50 percent of all real estate. The bill originally sent to Congress addressed the transfer of lands that belonged to the federal government to both states, without specifically making any reference to the native forest coverage of rural real estate plots. The new bill is still pending approval from both Houses of Congress, as well as the president.

Nicolás Maduro’s dictatorship has suspended the rights of Portuguese airline TAP to serve Venezuela for 90 days, after accusing the company of allowing the uncle of self-proclaimed interim president Juan Guaidó, Juan José Márquez, to bring explosives onto a flight towards Caracas. This decision was announced on Monday by Transportation minister Hipólito Abreu, who added that it could eventually turn into a “permanent suspension.” On Tuesday, the Chavista regime accused Márquez of bringing C4 explosives, undeclared bulletproof vests, and a plan written in English to commit terrorist attacks in the country.

On Monday, United States tech giant Apple released a public statement claiming it would not reach the revenue predicted for the first quarter of 2020 due to the coronavirus epidemic. According to the company, the worldwide supply of iPhone devices will be affected, since the model is manufactured in China. Besides that, company revenues will also be affected by the demand fall in the Asian country. According to the document, a new statement will be released in April.