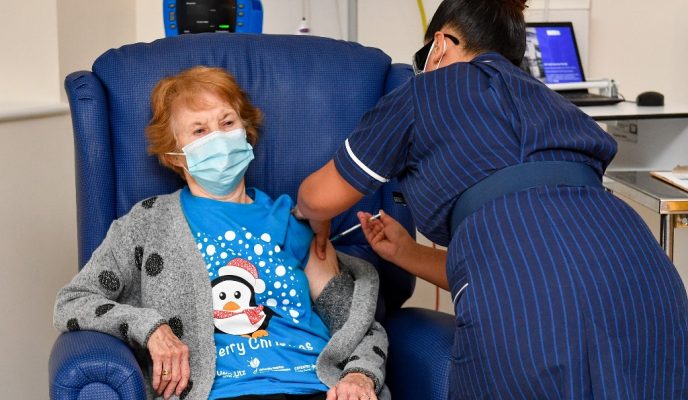 A 90-year-old woman became the first person in Europe to officially receive a vaccine against the novel coronavirus, after the government of the United Kingdom began the distribution of the immunizing agent produced by Pfizer. Meanwhile, Brazilian Health minister Eduardo Pazuello and São Paulo governor João Doria are publicly clashing over the authority to begin to distribute the Chinese-produced COVID-19 vaccine Sinovac to the state’s population. The United States Supreme Court has officially rejected president Donald Trump’s appeal to recount votes in the state of Pennsylvania, dealing yet another blow to his legal campaign to overturn his recent defeat to former vice-president Joe Biden in this year’s presidential election. Players from French club Paris Saint-Germain and Turkish club Istanbul Başakşehir have jointly walked off the pitch during a Champions League match after accusing one of the referee’s assistants of racist behavior. Finally, a mysterious illness in southern India has already put over 500 people in local hospitals.

Yesterday, Margaret Keenan became the first person in the world to receive the Pfizer/BioNTech vaccine against the novel coronavirus, after its official approval by the government of the United Kingdom. The 90-year-old grandmother received her shot at around 6:45 a.m. in the city of Coventry, England, and claimed she was “privileged to be the first person to be vaccinated against COVID-19. It’s the best early birthday present I could wish for.” The act marked the beginning of the country’s mass vaccination program; COVID-19 vaccines will be administered at 50 medical centers throughout the British territory to people over the age of 80 and health professionals.

In an official statement made at the Planalto Palace this Tuesday, Brazilian Health minister Eduardo Pazuello said it is up to his office and the federal government to plan the COVID-19 vaccination program in Brazil, and not to each individual state. The statement came one day after a tense meeting held through the internet with several state governors, among them São Paulo governor João Doria, who, after settling a deal with a Chinese laboratory responsible for producing the Sinovac vaccine, and even establishing January 25th for the beginning of the vaccination program, was publicly scolded by federal government officials – among them president Jair Bolsonaro himself. Those who oppose Doria’s initiative claim that Brazil’s Health Regulatory Agency, ANVISA, is yet to approve the use of any novel coronavirus vaccine in the country.

US Supreme Court rejects yet another Trump election appeal

This Tuesday, the United States Supreme Court rejected the last attempt of the Republican Party of overturning the confirmation of Democratic candidate Joe Biden in the state of Pennsylvania in this year’s presidential election. Current president Donald Trump, who was running for reelection, claims there has been widespread fraud in several states, but, so far, his legal team has not managed to convince public officials or show any solid proof of their allegations. By six votes to three, the country’s highest legal court refused to analyze the petition, without even presenting any justification to do so. Trump’s legal team is arguing that the widespread adoption of mail-in voting in the state was unconstitutional.

PSG and Istanbul Başakşehir walk off pitch after racist incident

In what has been considered a historic episode, players from French soccer club Paris Saint-Germain and their Turkish opponents from Istanbul Başakşehir collectively walked off the pitch during a Champions League match on Tuesday afternoon, after one of the referee’s assistants, Romanian fourth official Sebastian Colţescu, was accused of racist behavior against the coach of the Turkish club, Cameroonian Pierre Webó. The incident happened at the Parc des Princes Stadium, in Paris; in the 16th minute of the first half, Istanbul striker Demba Ba began to complain about something the official said, and, after Brazilian striker Neymar’s intervention, all other players began to call their teammates to leave the field. UEFA issued an official statement stating that an investigation on the matter will be held, and the match will be resumed today.

India’s authorities and health experts are worried about a mysterious illness which has caused the hospitalization of over 500 people and caused at least one death in the southern state of Andhra Pradesh. The disease was first detected on Saturday night, in the state capital, Eluru, and, according to witnesses, initially causes unexpected convulsions, which then evolve to nausea and anxiety, before leading to a loss of consciousness. Most patients have eventually recovered, but 148 are still in treatment, according to local government spokesman Dasari Nagarjuna. Experts from India’s Institute of Medical Sciences are already looking into the issue.