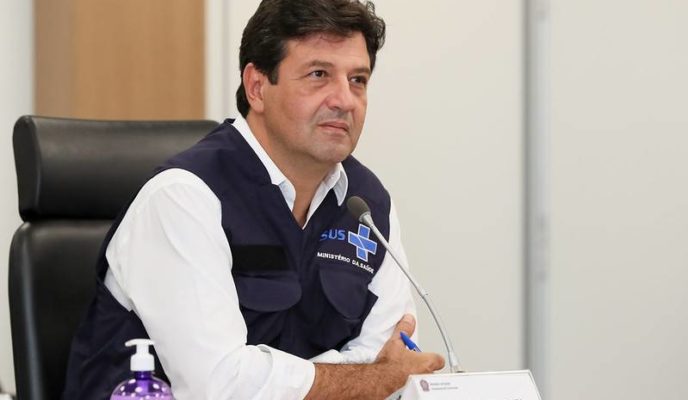 After a day on which the press announced rumors of his dismissal, Brazilian Health minister Luiz Henrique Mandetta held a press conference in which he announced he is to remain in office, saying “a doctor does not abandon his patient.” The São Paulo governor has authorized the state Military Police to use force in order to arrest people who gather in crowds, violating social distancing rules imposed by his government to prevent the spread of the novel coronavirus. Brazilian alcoholic beverage manufacturers have announced a 52 percent drop in consumption during the quarantine period imposed by the pandemic. An Australian cruise ship stranded off the coast of Uruguay has already registered over 80 cases of COVID-19 among its passengers and crewmembers. Finally, United Kingdom prime minister Boris Johnson, who had tested positive for the novel coronavirus and was hospitalized yesterday, is currently in “stable” condition, according to his government spokesman.

After dismissal rumors, Mandetta remains at the Ministry of Health

After a day filled with speculations regarding his likely dismissal, Brazilian Health minister Luiz Henrique Mandetta said he will remain in office. Mandetta held a press conference after a meeting with president Jair Bolsonaro and his government cabinet on Monday afternoon. “A doctor does not abandon his patient,” said the minister, showing visible signs of fatigue. He stressed that his team has been facing difficulties, due to a lack of harmony between them and the president. Mandetta was publicly supported by members of the Brazilian Senate and Federal Supreme Court, while Bolsonaro held a meeting with federal congressman Osmar Terra, who is being speculated as his likely replacement.

São Paulo governor João Dória said yesterday that the quarantine and social distancing measures throughout the state will be extended until April 22nd, due to the extent of the novel coronavirus pandemic. In a press conference, Dória said he granted authorization to the Military Police to arrest anyone who does not follow such guidelines or obey warnings. “If they don’t do it, the second stage will be the application of coercive measures, and these individuals may suffer the consequences applicable by law, including imprisonment. I am sure this won’t be necessary, that people will understand the need to stay home and follow the guidelines,” he said.

Sales of alcoholic beverages in Brazil fell by 52 percent during the period between March 15th and 31st, when social distancing and quarantine measures were implemented in order to avoid the contagion of the novel coronavirus, according to guidelines issued by the Ministry of Health and the World Health Organization. The Brazilian Beverage Association, ABRABE, which congregates producers of spirits, beer, and wine, claim that 40 percent of them have felt an ever stronger decrease in sales, since 61 percent of all alcohol consumption takes place in bars, restaurants, and nightclubs, which are currently on lockdown.

Australian ship stranded off Uruguay has over 80 infected with coronavirus

More than 80 passengers trapped on an Australian cruise ship stuck near the coast of Uruguay are infected with the novel coronavirus, according to reports from the press of both countries. The Greg Mortimer liner has been anchored 20 km off the port of Montevideo with 216 people onboard, including 83 crewmembers, most of them from the Philippines. The majority of the passengers are elderly people from Australia and the United Kingdom. A medical team tested all the people inside the vessel and found out that 81 tested positive for COVID-19, 45 tested negative, and 90 others are still waiting for the results.

United Kingdom prime minister Boris Johnson, the first world leader to declare he had been infected with the novel coronavirus, is currently in a “stable” health condition, and did not need the support of mechanical ventilators, according to a British government spokesman. Johnson had been hospitalized the night before, after his symptoms worsened. The spokesman also denied that the prime minister is suffering from pneumonia. Several heads of state and government worldwide expressed their support to Johnson, among them United States president Donald Trump, German chancellor Angela Merkel, Canadian prime minister Justin Trudeau, French president Emmanuel Macron, and Italian prime minister Giuseppe Conte, as well as other British politicians, such as Jeremy Corbyn, David Cameron, and Theresa May.