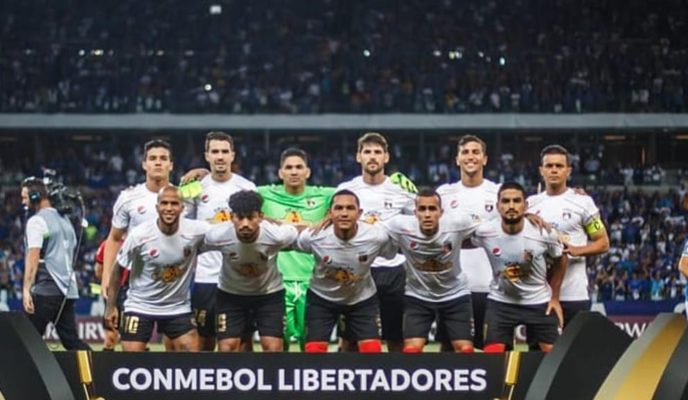 What would you do if you were defeated in an important Copa Libertadores match? Would you just sit and cry? Venezuelan soccer players who lost 2-0 to Cruzeiro last night may have other priorities such as to buy food for their starving families in Maduro’s country. In the volleyball world priorities are quite different: transgender athlete Tiffany is reacting to her peers’ criticism for being a biological male competing on a female team. At 77, music legend Nana Caymmi’s priority is just to speak her mind without sparing anyone, not even the sacred trio Chico, Gil, and Caetano. In the United States, the priority for pro-choice activists in Hollywood would be to restrict the reach of a pro-life movie. Back in Brazil, for once Bolsonaro’s priority is to do the sanest thing. Under pressure, he decided to back off from the decision to celebrate the 1964 Military Coup.

After losing match in Brazil, Venezuelan team buys a lot of canned food

Not everything was a loss for the Venezuelan soccer team Deportivo Lara. Yesterday, they were beaten 2-0 by Cruzeiro in the 2019 Copa Libertadores Group Stage, which made them last in their group. But at least the players had the possibility of buying some food. Canned food, to be precise, since Venezuela faces successive blackouts. After the game, tired and defeated, the team went to a supermarket and drugstore, where they also bought medicine.

Volleyball trans athlete reacts to criticism – one can only guess

Brazilian volleyball world lives troubled days because of Tiffany, a trans athlete that plays for the Sesi-Bauru female team. Today Tiffany reacted to the former volleyball player Ana Paula, who took coach Bernardinho’s side in the controversy. “You expand transphobia, you expand homophobia hidden in beautiful words. You are based only on guessing,” said Tiffany. One can only guess what she meant by “expand transphobia.”

In interview, Nana Caymmi doesn’t spare even her grandchildren

Brazilian singer Nana Caymmi is on fire. At 77, she is launching a new album. More importantly, she gave the sincerest interview to Folha de São Paulo yesterday. Daughter of the legendary songwriter Dorival Caymmi, and she herself an MPB legend, Caymmi distilled rage against the Brazilian music world and its leftist political affiliation. Cursing all the time, Caymmi didn’t even spare her daughters and granddaughters’ bad taste in music.

In the United States, the pro-life/pro-choice dispute writes another chapter. The Motion Picture Association of America, responsible for establishing film age ratings in the country, has decided that the pro-life picture “Unplanned” is unsuitable for minors. The explanation is that the movie has some very graphic images of aborted babies. An R-rated movie means that a seventeen-year-old person cannot watch the movie alone.

Bolsonaro backs off and proposes remembrance of Military Coup

President Jair Bolsonaro backed off from his order to the Armed Forces to celebrate the 1964 Military Coup, on March 31st. Facing fierce opposition from the Prosecution Office, civil society, the press, and some allies, he decided to turn the celebration into a remembrance of that day. The Prosecution Office warned Bolsonaro that celebrating the coup could be seen as a crime of responsibility and that the president could even be impeached.