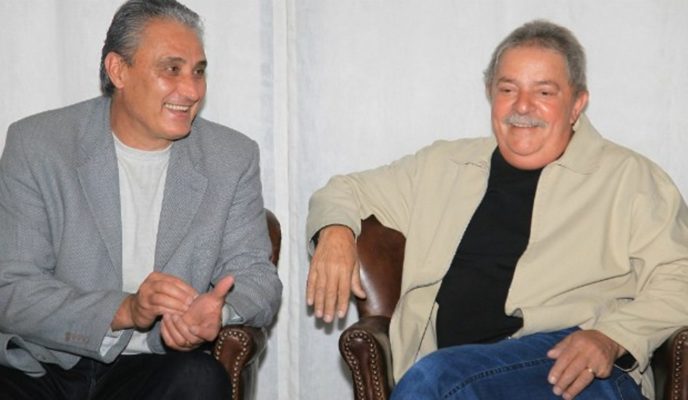 The issue surfaced because Tite was recently questioned if he would accept taking the Brazilian national soccer team to meet Bolsonaro in a hypothetical championship victory, or even before the 2019 Copa America

After refusing to lead the Brazilian national soccer team on a meeting with president-elect Jair Bolsonaro (PSL), head coach Tite declared he made a mistake when he took the 2012 Copa Libertadores trophy, won by Corinthians, to former president Luiz Inácio Lula da Silva (PT).

Next to representatives of the São Paulo club, the current leader of Brazilian national soccer also handed Lula a replica of the trophy then.

“In 2012, I made a mistake. He was no longer the president, but I went to the Institute [Lula] and congratulated him for a birthday. Just that, and I didn’t express any political opinion. I have no political party, I am only rooting for Brazil to become better in terms of social equality, independently of names,” the coach told the “Grande Círculo” show.

“I am rooting for our priorities to become education and punishment. That the kid from São Braz, from the outskirts of Caixas or a Rio de Janeiro hill, be given the possibility to study. And that we can see corruption, which kills more than homicides, being punished,” he completed.

The issue surfaced because Tite was recently questioned if he would accept taking the Brazilian national soccer team to meet Bolsonaro in a hypothetical championship victory, or even before the 2019 Copa America. The coach made clear he would rather avoid this kind of formality.

Still, Tite did not condemn the Brazilian Soccer Confederation (CBF) and Palmeiras, who invited Bolsonaro to the party organized to celebrate their Brazilian Championship title, earlier this month. The president-elect became the protagonist of the celebration, appearing in the front pages of newspapers holding the trophy.

“The protocol and the situation generated by the Palmeiras match are a matter of personal opinion. CBF and Palmeiras, as institutions, have their opinion. I made a mistake in the past, I wouldn’t talk to the president before the Cup, nor now, because I don’t agree with mixing sports and politics. Did I make a mistake in the past? Yes. Would I do it again? No.”

In a recent interview to Folha de S.Paulo, Palmeiras’ goalkeeper and idol Fernando Prass criticized the presence of the president-elect in the club’s celebration and said he was barely able to hold the trophy. “That moment belongs to the players,” he said. “I don’t support mixing politics and soccer.”