Fale a língua do mundo. Faça Wise Up.
Wed 17 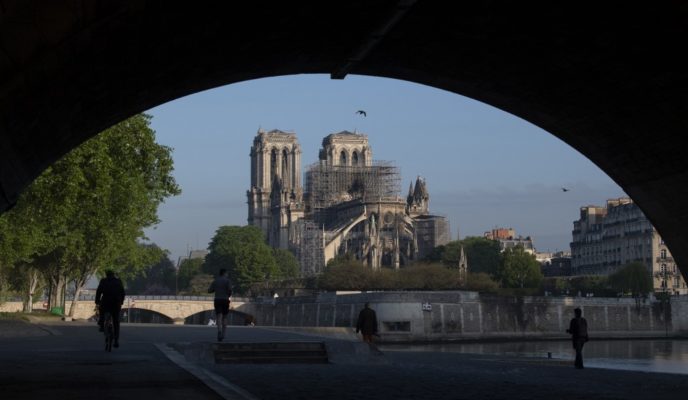 American tourists crave when they go to Europe: contact with European permanence, or the illusion of it – the miracle of a building that had been around for almost 900 years

As I watched Notre Dame Cathedral burn on a live stream, my first thought, unbidden and grotesque, was that at least my son had a chance to see it. In November, we were two of the 12 million people who visit Notre Dame annually. We went for what North American tourists crave when they go to Europe: contact with European permanence, or the illusion of it – the miracle of a building that had been around for almost 900 years.

My son was 12. Our visit to the cathedral came at the end of a long day. I had dragged him to various places I needed to visit for a research project, and he was more interested in the church’s WiFi than its magnificent 13th-century windows. But I pushed, like the annoying parent I am. “Look at that roof,” I said. “Take a good look. It will be a while before you see it again.” And he looked. He did look.

This evening, in the fire’s aftermath, I have the strange, horrific thought that not many people on the planet younger than him have memories of what it is like to walk through Notre Dame as it was. He was hungry. He was tired. He was distracted. And in that tired, hungry distraction lurk the remnants of one of the world’s most elaborate and magnificent creations. That is how frail art is, even art carved out of ancient stones: It survives in the febrile and capricious webs of mere consciousness – distracted, resistant consciousness. In the end, art is nowhere else.

I cannot know what memory of Notre Dame my son will retain. I was left with a vague but fierce impression, heaviness and lightness fused into single gestures. Some of the most famous windows in human history had a gleeful, childlike pleasure to them – kaleidoscopes kept still. The vaulted roof, with its staggering elegance, rose like enormous wings lifted out of stone. I admit, like a New World rube, I was impressed that the timbers had belonged to a forest growing a thousand years ago.

I travel often with my son. Middle-aged wanderlust has combined, oddly in me, with homesickness. I often need to leave the city where I live, sometimes for work and sometimes for escape, but when I do, I grow deeply lonely. So whenever I can, I take the boy along with me. He is excellent company and possesses the key virtue of any co-traveler – the ability to roll with the punches. I’ve taken him to Central America and the Middle East and Africa and Europe, and everywhere it is the same, an inspection of ephemerality. “Look at that bird,” I say, pointing to a white cotinga in Costa Rica. “Look before it goes.” It is a fleet thing coursing through the mangrove forest, soaring over the black branches, out of view. I hold back a word. I do not say, “Look before it goes extinct.” But that is what I mean. “The coral! The coral!” I mouth underwater, snorkeling at a reef, splashing my gestures. I do not say: “Look carefully. Look. Remember it. It will soon be only in your memory.”

Even a trip to Notre Dame, apparently, is tourism of the ephemeral. Much of the cathedral’s structure has survived, and the rest will be rebuilt no doubt, but everyone will know that it has been rebuilt. The aura of permanence that the building possessed – that’s gone. And that is what we craved when we visited. We live in an age of ephemerality, and the devastation of a building that had survived the Middle Ages, the French Revolution and the Second World War comes barely as a surprise. We expect such events now. Our children expect them. All that is solid melts into air. Once-stable institutions, impregnable towers, burn and topple everywhere. . The art we cherish is the art of addictive consumability rather than a celebration of the eternal. And our time will leave no Notre Dame as a memento for the future. The present’s contribution to posterity will be the 620,000 square miles of disposable floating plastic trapped in the North Pacific Gyre with a half-life of between 450 and 800 years. In such conditions, the desire to see the world can only ever be the desire to see the world falling apart.

But maybe that is all any tourism is or has ever been. We all know that nothing lasts forever. Ultimately, there is no difference between the Notre Dame Cathedral that has stood for nearly 900 years and a kite that the wind catches on a spring afternoon. But it’s one thing to know. It’s another to watch that truth live-streamed, with people taking selfies while the glory of thousands of skilled hands and minds crumbles in flames behind them.

And it’s yet another thing, a specific 21st-century pang, to expose your children to the ephemerality, to say to them, “Look at this, even though it’s going to die right in front of your eyes.” The plans are underway, already, to rebuild Notre Dame. The major works of art and the holy relics have been preserved. It’s possible, likely even, that my son will live to see a version of Notre Dame rise in some of its glory again. Hell, maybe even I will. But how has our vision been infected? What are we here to see if everything falls apart?

Underneath the ache of the ephemeral, of which the near-fall of Notre Dame is the perfect exemplar, there’s the obvious disgrace, the sense of failure, generational and personal, specific to this moment. I cannot think of anything to do with this world except to see it, to show it, even as it burns.