Fale a língua do mundo. Faça Wise Up.
Thu 10 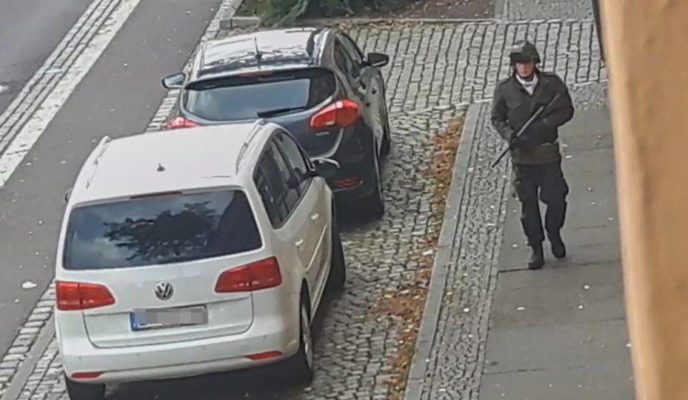 A man shot and killed two people near a synagogue in Halle, Germany; the shooter filmed his attack and expressed his hatred toward Jews as the motivation for the crime. In a match that marked striker Neymar’s 100th international match, the Brazilian national soccer team drew with Senegal in a disappointing performance. The 2018 and 2019 Nobel Prizes in Literature were awarded to Polish writer Olga Tokarczuk and Austrian author Peter Handke, respectively; the 2018 award was only given this year due to a sex scandal involving one of the jurors of the Swedish Academy last year. After the US pulled its troops out of northern Syria, Turkish troops began an offensive attack against Kurdish militants in the region; international aid agencies have expressed their concern with an increase in the number of refugees and the possibility of the escape of ISIS fighters currently being held in prison camps by the Kurds. Finally, Apple removed from its online store an app which allowed protesters in Hong Kong to pinpoint the location of police forces in the city.

On Wednesday, a shooter killed two people near a synagogue in the city of Halle, in eastern Germany. The criminal filmed the attack with a camera installed on his helmet, echoing the actions of another shooter who attacked two mosques in New Zealand early this year. Discussing the crime, Germany’s Interior minister Horst Seehofer said: “Based on the information that we have at this point, we must assume that at the least, this was an anti-Semitic attack.” In his 35-minute video, the man, who wears a green jacket and calls himself “Anon”, denied the Holocaust, denounced feminists and immigrants, then declared: “The root of all these problems is the Jew.” German authorities said they already have a suspect under custody.

The Brazilian national soccer squad is yet to win any matches since it won the Copa America title in July; after drawing with Colombia and losing to Peru last month, the team led by Tite obtained a 1-1 draw against Senegal in a lukewarm friendly held today in Singapore which marked striker Neymar’s 100th international match. The team began playing well, and a beautiful goal scored by Roberto Firmino gave the impression that things were about to change, but the African team soon seized control of the game and tied it before the end of the first half. Brazil will now play Nigeria on Sunday, once again in Singapore’s National Stadium.

The 2018 and 2019 Nobel Prizes in Literature were awarded to Polish writer Olga Tokarczuk and Austrian author Peter Handke, respectively. The joint announcement was made today by the Swedish Academy, and both won 9 million Swedish kronor, along with the famous medal with Alfred Nobel’s image. The 2018 prize was only awarded this year due to a sex scandal that involved one of the jurors last year. Tokarczuk received the prize for her “narrative imagination that with encyclopedic passion represents the crossing of boundaries as a form of life,” while Handke was cited for “an influential work that with linguistic ingenuity has explored the periphery and the specificity of human experience.”

Turkish offensive in northern Syria may cause exodus of ISIS fighters

After the withdrawal of United States troops from the border between Turkey and Syria, Turkish troops began today a military offensive to seize control of the area. Jet fighters bombed Kurdish militants and tanks made incursions into Syrian territory. Humanitarian aid agencies are warning about a new refugee crisis, and also expressed their concern with the fate of thousands of Islamic State jihadi fighters, who are currently being held in detention camps administered by the Kurds, and could escape and regroup somewhere else to resume their attacks. Eight civilians have died so far, and hundreds of Kurds have left the region.

Today, Apple removed from its virtual store a smartphone app that allowed protesters to track the movements made by the Hong Kong police, after an article in a Chinese government newspaper accused the company of aiding “rioters”: “Letting poisonous software have its way is a betrayal of the Chinese people’s feelings,” read the article, written under a pseudonym that translates into “Calming the Waves.” In a statement, Apple said that the HKmap.live app, which allows users to pinpoint the location of police officers on a map, was removed from its store after it was used by protesters to “target and ambush police” and “threaten public safety.”