Fale a língua do mundo. Faça Wise Up.
Thu 26 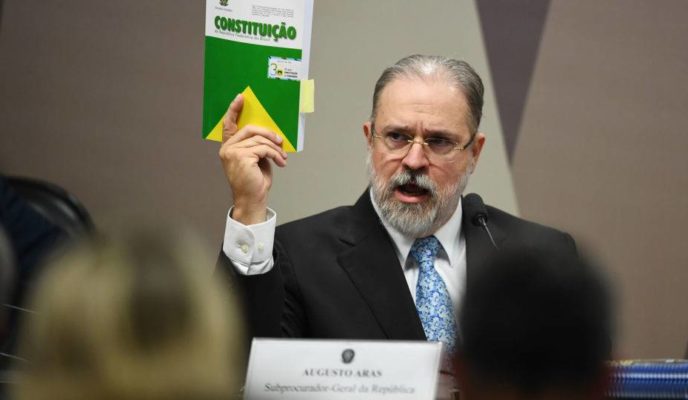 The Brazilian Senate has approved president Jair Bolsonaro’s appointment to the office of Federal Attorney General, Augusto Aras, who has officially been named in the country’s Federal Register. Venezuelan dictator Nicolás Maduro’s second in command, Diosdado Cabello, is on an official mission to North Korea, where, despite not meeting local dictator Kim Jong-un, he handed a gift and a letter to his right-hand man. American congressmen from the Democrat opposition introduced a bill in Congress to obstruct president Donald Trump’s support to Jair Bolsonaro. Meanwhile, in the Brazilian Congress, members of the opposition met with native indigenous chief Raoni Metuktire, who was mentioned by president Bolsonaro in his speech at the United Nations General Assembly; Raoni, who has been nominated for the peace prize, harshly criticized Bolsonaro. Finally, a court in Germany has ruled that hangovers may be considered an illness.

Approved by Senate, Augusto Aras’s name has already been listed in the Federal Register

A little more than three hours after the Brazilian Senate approved Augusto Aras’s appointment as new Federal Attorney General, president Jair Bolsonaro has already authorized the publication of his name in an extra edition of the Federal Register. With this, Aras may now be “officially considered” the country’s new attorney general. His inauguration ceremony is yet to be scheduled. The Q&A session to which he was submitted in the Congressional Justice and Constitution Commission, on Wednesday, lasted over five hours.

While Venezuelan dictator Nicolás Maduro visits Russia, where he met president Vladimir Putin, his right-hand man is in North Korea. Diosdado Cabello, Chavismo’s number two and president of the National Constituent Assembly, handed a letter and a gift to North Korean dictator Kim Jong-un on Thursday morning, according to state news agency KCNA. The Venezuelan politician did not personally meet Kim, however; both items were handed to Choe Ryong-Hae, himself the North Korean leader’s right-hand man. The North Korean agency also informed that country’s willingness to make efforts to expand and develop the bilateral friendship with Venezuela in all fields.

One day after Brazilian president Jair Bolsonaro’s speech in the United Nations General Assembly, United States congressmen introduced a bill in the Lower House of Congress which may obstruct US president Donald Trump’s support to his South American counterpart. The bill was signed by 16 representatives of the Democratic Party, and states that the US should cancel its designation of Brazil as a major non-NATO ally, and withdraw all military and police support to the Brazilian government, unless the Department of State can be certified that effective measures are being taken to avoid unjustified deaths by Brazil’s security agents and to hinder the investigation of deaths of activists, as well as comply with human rights international rules.

In Congress, chief Raoni calls Bolsonaro a “crazy man” and says: “he has to go”

Brazilian indigenous chief Raoni Metuktire, of the Kayapo people, has met with opposition members in the Lower House of Congress on Wednesday. Criticized by president Jair Bolsonaro during the latter’s speech in the United Nations General Assembly, chief Raoni answered: “Bolsonaro said I am not a leader; he is the one who is not a leader, and has to leave.” He added that he opposes violence, and continued: “You must listen to the children of the land, and respect that we are her fruits. I oppose violence, and defend peace and unity so everyone can live well.” The 89-year-old Nobel Peace Prize nominee concluded his speech by calling Bolsonaro “a crazy man”.

Hangover is considered an illness by German court

People who want to use the excuse of “being hungover” to fail to show up for work may try to do so in Germany. Early this week, the Frankfurt Superior Regional Court decided that hangovers could be addressed as an illness, since the symptoms it causes – nausea, tiredness, and headaches, could make a person ill, even if only for a relatively short period of time. The decision was made during the trial of a beverage manufacturer, whose product told consumers that it was able to treat or prevent hangover symptoms. “Information about a food product cannot ascribe any properties for preventing, treating or healing a human illness or give the impression of such a property,” said the statement issued by the court.