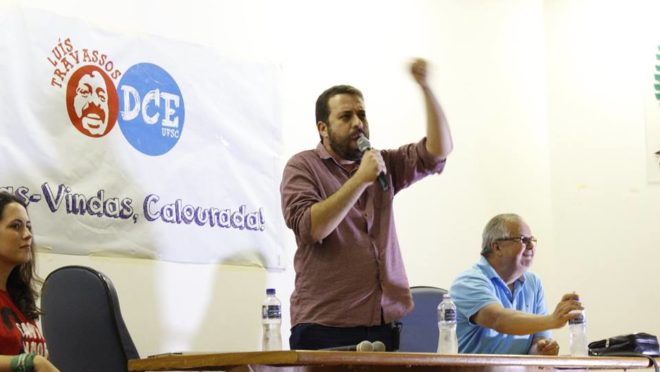 Under protests from right-wing groups, former PSOL presidential candidate Guilherme Boulos took part in an event in the rectory of the Federal University of Santa Catarina. During the act, he asked the left to unite against president Jair Bolsonaro

Under protests from right-wing groups, former PSOL presidential candidate Guilherme Boulos took part in an event at a masterclass in the rectory of the Federal University of Santa Catarina, at Florianópolis, on Tuesday (19). During the act, he asked the left to unite against president Jair Bolsonaro and “his crowd”, and preached for the freedom of ex-president Luiz Inácio Lula da Silva, currently under arrest in Curitiba.

When questioned, the university did not make any official statements on having loaned the public place for a political rally. In 2017, UFSC prohibited an anti-Communism event, but eventually allowed it to take place a few months later.

According to Boulos, Bolsonaro and “his crowd” are coming “like a steamroller, trying to run over everyone.” “If each of us sticks to taking care of our own problems, they will kill.”

During the heated 40-minute speech, he asked the union of the left against “Fascism”.

“If we stick together like a wall, if we have the massiveness, which often the left lacks in this country, of putting that which unites us ahead of that which separates us, of understanding that the legitimate differences which exist among us – because they are the ones with a single thought – and that this diversity is smaller than the differences we have with Bolsonaro and his crowd, that is all we need,” said Boulos.

Boulos compared Lula to a political prisoner, even though the former president has been convicted in two separate Operation Car Wash investigations – on the triplex apartment in Guarujá and the Atibaia ranch – and is still awaiting trial for at least four other lawsuits, not to mention countless other accusations still under investigation.

“We need to stick together, regardless of any political judgment being made, which in our case, is a democratic issue, the freedom of a political prisoner: Luiz Inácio Lula da Silva,” said Boulos, followed by screams of “Free Lula”.

The auditorium, which had a capacity of 203 seated people, was crowded, and two screens were placed outside to broadcast Boulos’ speech. Among the spectators were students of the university, professors, as well as militants holding flags of left-wing political parties.

After Boulos’ arrival, protests of right-wing groups began. Leftist students and members of UFSC’s Central Students Union, responsible for the event, answered with watchwords and shouted “Bolsonaro is a militiaman”. According to Grupo Direita Santa Catarina, one of the organizers of the protest, there were verbal arguments and, when they questioned their right to remain there, they were also physically assaulted, with pushes and shoves, until they all were forced to withdraw. One person fell down and was injured.

According to the UFSC’s Central Students Union, half of the tickets were paid with money provided by the group, and the other by the politician himself, who was interested in attending the event. Besides, even though the speech during the lecture was only a show of political position, the Students Union and the students who were in support of the politician defended the event as a “debate space”.

“What we spent in public money was money to manage the university, which is destined precisely for that, so we can debate ideas and present projects of plural, different roots,” said the Students Union coordinator, Marco Antonio Machado.

Organizers of the protest, on the other hand, said they demonstrated against the political aspect of the lecture, which did not provide any space for contradictory opinions, and was held in a public space. Besides, they pointed out that, two months after the cancellation of an event paying tribute to victims of Communism was canceled in 2017, Boulos himself held a master lecture at UFSC. According to the university, the politician spoke on the “challenged faced by the Left”.

Regarding the fact that they had to abandon the place, they complained: “We were not able to demonstrate against what happened. We were in a group of 30 or 40 people, and they were more, some of them even covered their faces. We weren’t there to confront them, but to show that we did not agree with Boulos’ presence in the university, in an event paid with our tax money,” said the protesters.