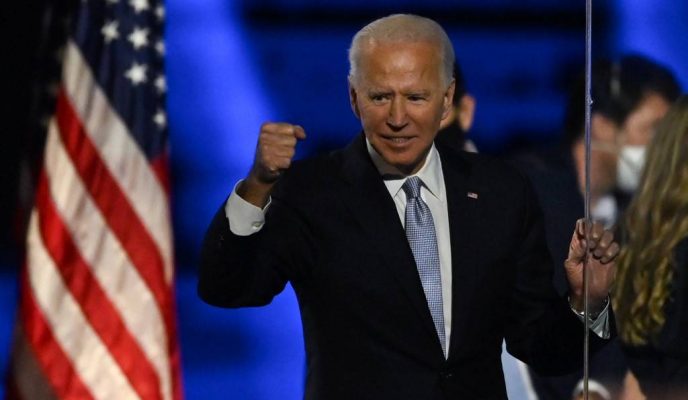 Former US vice-president Joe Biden has defeated Republican reelection candidate Donald Trump to become the superpower’s 46th elected leader; during his victory speech, along with vice-president elect, Kamala Harris, the first woman to occupy this office, he called for reconciliation. The government of several countries, however, amongst them Brazil, are still waiting for an official result, given that votes are still being counted and that Trump has said he will appeal for a recount. Pharmaceutical companies Pfizer and BioNTech announced today that their experimental COVID-19 vaccine has obtained a 90% effectiveness rate against the novel coronavirus. Socialist candidate Luis Arce has been inaugurated as the president of Bolivia, and has also appealed for a reconciliation, following a controversial series of events in the South American country. Finally, a couple has chosen an unusual location for their wedding, so that their relatives could attend the ceremony – a wharf on a river along the US-Canada border.

Even though votes are still being counted in some states, Democratic Party candidate and former vice-president Joe Biden has managed to obtain all 270 electoral college votes needed to win the United States presidential election after obtaining close victories in three crucial states which in 2016 were responsible for the election of his rival this year, current president Donald Trump, who ran for the Republicans: Wisconsin, Michigan and Pennsylvania. Biden held his victory speech in Wilmington, the largest city of the state of Delaware, where he lived all his life; along with his vice-president, Kamala Harris, both called for unity in the country. Both launched on Sunday the official transitional government website, where they listed their priorities for the next four years: COVID-19, economic recovery, racial equality and climate change. Meanwhile, Trump’s campaign team announced they will call for a recount in Wisconsin.

Brazil, along with China, Mexico and Russia, hold off on congratulating Biden

Some of the United States’s major trade partners have refrained from congratulating president-elect Joe Biden, especially given that current president Donald Trump still hasn’t conceded and is continuing to pursue legal challenges surrounding the vote. Russian president Vladimir Putin, for instance, will remain silent for the time being: “We think it appropriate to wait for the official vote count,” Kremlin spokesman Dmitry Peskov told reporters. Chinese foreign ministry spokesman Wang Wenbin also said that his government understands “that the US presidential election result will be determined following US law and procedures,” while Mexican president Andrés Manuel López Obrador said that he didn’t “want to be imprudent nor act hastily.” Brazilian vice-president Hamilton Mourão, speaking on behalf of president Jair Bolsonaro, one of Trump’s closest allies, said that they were waiting for the end of the “imbroglio” to salute Biden.

Pfizer and BioNTech COVID-19 vaccine found to be 90% effective

Pharmaceutical companies Pfizer and BioNTech announced today that the experimental COVID-19 vaccine they have been developing has shown itself to be 90% effective against the novel coronavirus, according to a preliminary analysis of data of the third stage of clinical trials. The companies are the first ones to release a report on the efficacy of their products at this stage; in it, they claim that in two groups of 43 thousand people, half of which were given the immunizing agent and half of which were given the placebo, over 90 percent of the first group had less COVID-19 symptoms than those of the second. Important information on the vaccine, such as if it prevents severe cases of the disease or if it reduces the viral load in the body, have not been disclosed, and these results are yet to be reviewed by third-party researchers.

Bolivia’s president-elect, Luis Arce, was sworn-in on Sunday and appealed for reconciliation in the South American country, deeply polarized along ideological lines after the recent ousting of former president Evo Morales, currently in exile following his controversial reelection. Morales, of whom Arce is widely regarded as “protégé”, has been forced to resign after nationwide protests and accusations of fraud late last year. Despite his appeals, Arce called the transitional government of president Jeanine Áñez “brutal” and “putschist” for “ignoring the will of the people”, and said he would strive to fix what was wrong and improve what was right. The ceremony was held in the capital, La Paz, and was attended by the presidents of Paraguay, Argentina and Colombia, as well as king Felipe VI of Spain.

Couple weds along US-Canada border so family can attend

Changing plans is part of the process of organizing any wedding ceremony, but a couple from Nova Scotia, Lindsay Clowes and Alex Leckie, had to go way beyond the conventional unforeseen circumstances. Due to the restrictions imposed by the COVID-19 pandemic, their relatives – who live both in the United States and Canada – would not be able to attend the “big day”, since they are prevented from long-distance travel and agglomerating. They decided, therefore, to switch the place they had previously picked for their ceremony for a dock on a river that straddles the border between both countries, where everyone would be able to attend the event following proper safety measures. The “I do” was said at an improvised altar along the St. Croix River, in St. Stephen, New Brunswick.