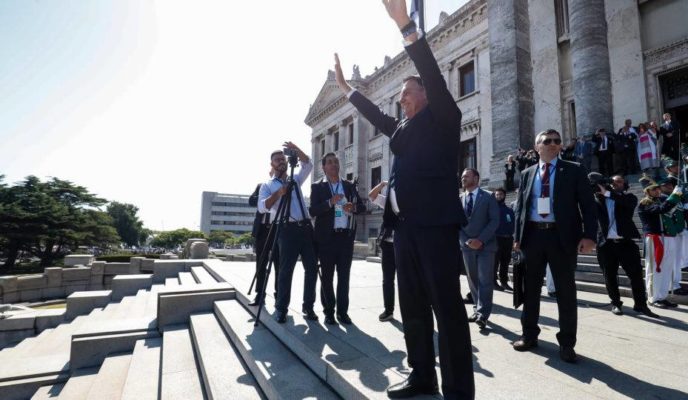 Jair Bolsonaro attends Uruguayan newly-elected president, Luis Lacalle Pou’s, inauguration ceremony, and discusses Mercosur. Ceará’s mutinous officers have decided to put an end to their strike after accepting a proposal made by representatives of all three branches of government. Democrat candidate Pete Buttigieg has officially dropped out of the presidential race in the 2020 United States elections, paving the way for a final showdown between former congressman Bernie Sanders and ex-vice president Joe Biden. Greek forces have officially stopped immigrants fleeing from Turkey from entering its territory – the Turkish government is accusing Russian and US forces of causing such population movements. Finally, the number of Coronavirus cases has reached 87,137 in 58 countries, according to the World Health Organization.

It was a short and silent trip, but Brazilian president Jair Bolsonaro attended on Sunday the inauguration ceremony of newly-elected Uruguayan president Luis Lacalle Pou – a center-right politican, and his likely ally in Mercosur. During his nine hours in Montevideo, Bolsonaro also met another one of his South American allies, Chilean president Sebastián Piñera, during a talk in which they discussed Prosur, a new bloc made up of seven countries in the continent. Bolsonaro greeted supporters before listening to Lacalle Pou’s inauguration speech, which mentioned Mercosur integration, environmental conservation, education, public safety, and sexual inclusion.

Ceará state military police officers who remained in mutiny in Fortaleza’s 18th battalion decided to put an end to their strike on Sunday evening. They voted to accept a proposal made by a special commission formed by representatives of all three branches of government, as well as military police officers. The proposal included the entitlement to a legal lawsuit followed by the Brazilian Bar Association, by the Public Defender’s Office, the Army, and the state’s commitment not to transfer any prisoners from the state up to 60 days from the end of the mutiny, which lasted 14 days.

On Sunday, Democratic candidate Pete Buttigieg officially dropped out of the United States presidential race. The 38-year-old former South Bend, Indiana mayor, managed to obtain a good result in the Iowa primaries, but stepped out of the race after losing to former ex-vice president Joe Biden in the South Carolina primary elections this Saturday. Buttigieg, the first openly gay US presidential candidate, managed to come in second place after Bernie Sanders in the New Hampshire primaries.

This weekend, Greece has stopped 9,972 immigrants from crossing the Evros river, which separates it from neighboring Turkey and Bulgaria. Greek prime minister Kyriakos Mitsotakis has summoned an emergency meeting of the country’s national cabinet. Throughout the last 24 hours, 73 immigrants have been arrested, including 66 who had been previously notified by an official statement made by the Greek government. According to the United Nations, around 13 thousand refugees were on the border between both countries. On Friday, Turkey announced its opening of land borders, after being struck by Syrian strikes.

Coronavirus cases reach 87,137 in 58 countries, according to WHO

The number of confirmed coronavirus cases throughout the world has risen from 1,739 to 87,137, and 2,977 people have already died due to COVID-19. The data has been updated on Sunday by the World Health Organization (WHO), which has kept the global risk assessment at a “very high” level. According to the institution, Azerbaijan, Ecuador, Ireland, Monaco, and Qatar have joined the list of nations already affected by the disease. During the last 24 hours, 53 people have died all over the world due to the novel coronavirus.