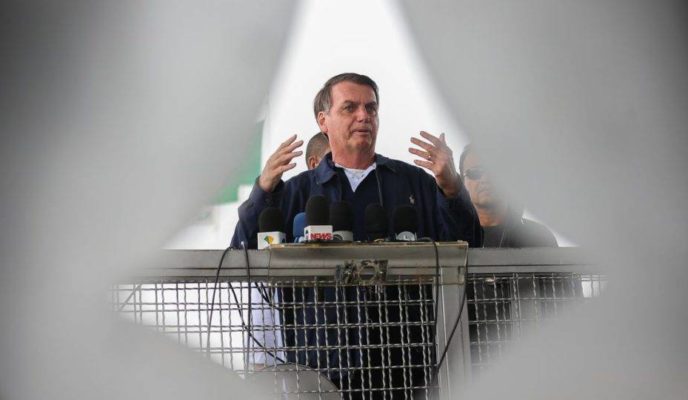 Brazilian president Jair Bolsonaro signed a decree authorizing the deployment of the country’s Armed Forces in the state of Ceará, currently undergoing a crisis caused by a police strike; this week, senator Cid Gomes was shot twice in the chest after trying to ram a backhoe through a barricade set up by strikers. German chancellor Angela Merkel condemned the shooting attacks which killed nine people in the city of Hanau, and attributed them to right-wing extremism and racist motivations. Portuguese lawmakers have approved five bills decriminalizing euthanasia, facing opposition from the Catholic Church and the country’s conservative sectors. The Brazilian Navy has monitored for a week a Russian high-tech surveillance ship suspected of spying on Europe and the United States; the vessel was found near an area of the country’s coast with undersea internet cables. Finally, a law banning the use of plastic straws in every São Paulo commercial establishment will begin to be enforced during Carnival.

Today, Brazilian president Jair Bolsonaro signed the Law and Order Guarantee Decree authorizing the deployment of Armed Forces to deal with the public safety problem in Ceará. The state is going through a crisis due to a mutinous police strike on the eve of Carnival celebrations. On Wednesday, senator Cid Gomes was shot twice in the chest after trying to ram a backhoe through a police barricade in the city of Sobral. Commenting on the episode, Bolsonaro said that “images are worth more than millions of words.” Gomes is currently in stable condition and has been transferred to the state capital, Fortaleza.

“Racism is poison”, says Merkel regarding attack which killed nine

German chancellor Angela Merkel said that there is plenty of evidence that the shooting attacks which killed nine people in Hanau on Wednesday evening have been motivated by racism. “It is still too early for a final evaluation. Everything is being done to clear up the background of these horrible murders to the last detail. But at present there is much evidence that the perpetrator acted out of right-wing extremist, racist motives. Out of hatred against people of other origins, other beliefs or other outward appearances. Racism is a poison, hatred is a poison,” Merkel said. According to the German police, the suspect, a 43-year-old man named Tobias R., had posted on the internet a “kind of manifesto” with “deeply racist”content.

Yesterday, members of Portugal’s 230-seat Republican Assembly approved five right-to-die bills, each by a comfortable margin. The decision will virtually legalize euthanasia and physician-assisted suicide for terminally ill people, as long as the patient is conscious enough to make this decision, and is suffering from a fatal or incurable disease. Hundreds of people gathered outside the parliament building to protest the decision, and conservative and Catholic leaders also voiced their discontent.

The Brazilian Navy spent a week monitoring a Russian ship suspected of spying on Europe and the United States. The vessel was detected on February 10th in the Brazilian Exclusive Economic Zone. At first, Navy officials tried to contact Russian intelligence ship Yantar, but it quickly disappeared from all monitoring equipment. The Navy then launched a patrol operation, which located the ship 80 kilometers away from the beaches of Rio de Janeiro. The Russian crew initially refused to answer calls from the Brazilian officers, and then provided evasive answers. The Yantar is equipped with high-tech sensors in order to scan the bottom of the ocean, and was found close to an area with undersea internet cables.

A law banning the use or sale of plastic straws in any commercial establishment in the city of São Paulo will begin to be enforced this week. The legislation, approved last year, must be upheld by bars, restaurants, bakeries, hotels, and clubs, among other businesses. The owner who does not comply may receive a fine of up to R$ 5.3 thousand. Agents of Brazil’s consumer protection agency, PROCON, will begin inspecting and, if necessary, fining violators during Carnival. According to the law, the alternatives to replace plastic straws are biodegradable ones, or straws made of recyclable paper.