Fale a língua do mundo. Faça Wise Up.
Tue 05 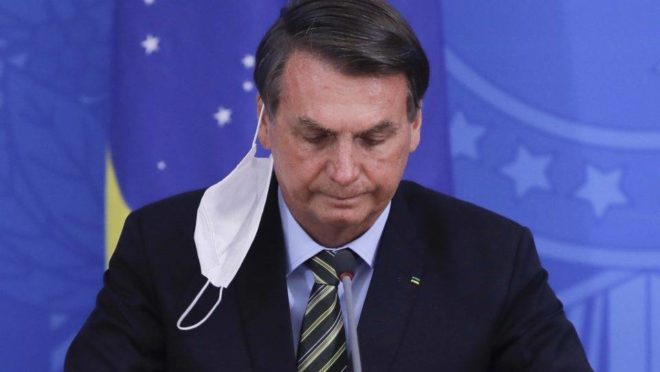 After returning home from a 17-day holiday at the beach, Brazilian president Jair Bolsonaro said that the country is “broken” and that there is nothing he can do about it. US president Donald Trump is involved in a new controversy, after a phone call was leaked in which he was caught trying to pressure Georgia’s Secretary of State Brad Raffensperger to find defrauded votes in order to change the results of the presidential election in that state. UK prime minister Boris Johnson has declared a new lockdown in England, the harshest one since last March, after the sudden surge in COVID-19 cases caused by a new strain of the novel coronavirus. Pope Francis has issued a public statement in which he criticized people who have ignored the measures being taken by several governments to prevent the spread of the novel coronavirus in order to go on holiday and “have fun”. Finally, Chinese billionaire Jack Ma, founder of the Alibaba group, has apparently gone missing, after making several critical statements against the government of China and its financial system.

Bolsonaro: “Brazil is broken, there’s nothing I can do”

Brazilian president Jair Bolsonaro said today that Brazil is “broken” and that there is nothing he can do about it. The statement happened during a conversation with supporters on his first day after returning from his holidays. “Brazil is broken (…). There’s nothing I can do. I wish I could alter the income tax scheme, but yeah, we had this virus, potentialized by this media we have here, this shameless media,” he said as he left the Alvorada Palace. Bolsonaro has been widely criticized for taking a 17-day beach vacation in the states of Santa Catarina and São Paulo, including a stunt that became notorious worldwide in which he jumped into the sea to meet with a crowd of supporters at the beach.

Trump may be sued over voting fraud phone call

Brad Raffensperger, Secretary of State of the US state of Georgia, has suggested the possibility of suing American president Donald Trump on account of the phone call in which the current head of state asked the secretary to “find” defrauded votes in order to revert the result of the presidential elections in that state. The issue surfaced after a newspaper posted on the internet the audio of the phone call, in which Trump also threatened Raffensperger, who is a member of the Republican Party, with a possible backlash if he did not abide by his request. The Georgia politician also claimed that Trump’s accusations of voting fraud in the state are based on “fake news”, using one of the US president’s favorite catchphrases. Trump, in turn, is also threatening to sue Raffensperger for leaking the contents of their phone call.

Contrary to what he had previously said this week, British prime minister Boris Johnson announced a new lockdown in England for at least six weeks, the harshest to be implemented since March last year. Schools will be closed, and people will only be allowed to leave their homes once a day in order to exercise. The prime minister was informed on Monday that cases have been surging at an extremely fast pace, especially due to the new strain of the novel coronavirus, which has a rapid rate of infection, and general practitioners throughout the country recommended him to switch the COVID-19 alert to the highest possible level. “It is clear that we need to do [more] efforts. (…) Therefore, we must enter into a general lockdown strict enough to control this boom,” he said during a televised speech.

In a video address made after his traditional Angelus blessing, Pope Francis publicly criticized people who are traveling during the holiday season amidst the restrictions imposed by most governments due to the novel coronavirus pandemic, claiming they thought “only about going on holiday and having fun. This pained me a lot.” During the ceremony, which is traditionally held from a window overlooking St. Peter’s Square, in the Vatican, but was moved indoors to prevent crowds from gathering, Pope Francis also said that we won’t know “what 2021 will reserve for us, but what all of us can do together is make a bit more of an effort to take care of each other. There is the temptation to take care only of our own interests.” In the past, the Pope had also criticized people who refused to wear masks or protested against coronavirus restrictions, commenting that they move in “their own little world of interests.”

Jack Ma, the Chinese billionaire who founded the Alibaba group, has not been seen in public for several weeks, raising speculations that he may have gone missing. He failed to show up for the final episode of Africa’s Business Heroes, a talent show organized by the Jack Ma Foundation, in which 10 emerging African entrepreneurs receive a shared subsidy of US$ 1.5 million to use in their businesses. A spokesman said he had a “scheduling conflict”. Ma’s businesses have been scrutinized by the Chinese government due to an accusation of monopoly ever since he made a controversial speech in Shanghai, in which he criticized China’s financial regulation system, accusing it of stifling innovation, and claiming that Chinese banks operate with the same mentality of a “pawn shop”.