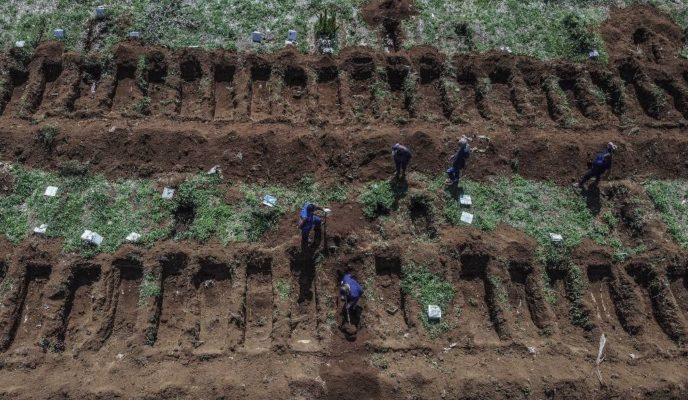 Brazilian president Jair Bolsonaro lashed out at another São Paulo politician, this time São Paulo’s mayor, Bruno Covas, describing a picture released of several open graves being dug at a local cemetery as a “horror movie”. Meanwhile, several members of Bolsonaro’s cabinet are publicly contradicting him, like Health minister Luiz Henrique Mandetta, who claimed that a clear reduction in the graph curve showing the number of infected people in the country was due to the social distancing measures openly opposed by Bolsonaro, or his own vice president, general Hamilton Mourão, who said that such measures were necessary to prevent the spread of the novel coronavirus. According to the Brazilian Ministry of Health, headed by Mandetta, the first COVID-19 case in Brazil happened in January 2020, according to a retroactive investigation being made by the ministry on all respiratory hospitalization cases. The Brazilian government has issued an official decree limiting the number of people able to cross the border of Brazil with Uruguay, banning all people arriving from eight other South American countries which had their borders with Brazil closed previously this year. Finally, the government of the United Kingdom has decided to send some of the Royal Navy’s military ships to the Caribbean, in order to protect local inhabitants from any damages caused by the forthcoming hurricane season, as well as assisting with any coronavirus pandemic-related needs.

During an interview with Jovem Pan Radio, Brazilian President Jair Bolsonaro called a “horror movie”  in which he discussed a footage showing several open graves being dug at a cemetery in the São Paulo neighborhood of Vila Formosa. The picture depicted preparations being made at the cemetery to receive the bodies of recently-deceased COVID-19 victims, and was posed at the cover of US newspaper Washington Post. “Shame on you, mayor Bruno Covas. Turning to sensationalism over the death of some people who are losing their lives to due a likely contamination by the virus. (…) This is a footage from a horror movie.”

President begins to be questioned by his own cabinet

President Jair Bolsonaro’s controversial attitudes on the novel coronavirus pandemic have begun to be publicly discussed and questioned by members of his own cabinet, including vice president Hamilton Mourão. During an interview with Jovem Pan Radio, Bolsonaro said that he has no intention of replacing Health minister Luiz Henrique Mandetta, but said that no member of his cabinet is “undismissable” and said that at some point, he “had crossed a line”. Mandetta said, during another press conference, that the flattening of the coronavirus curve showing the number of cases in the country was due to the social distancing measures Bolsonaro so fiercely opposes. Meanwhile, vice president Mourão said that such measures were necessary to prevent the spread of the spread of the virus throughout Brazil: “we are still in that pre-peak moment.”

Novel coronavirus reached Brazil in January, according to Health Ministry

Brazil had its first recorded novel coronavirus infection case in January this year. The information was officially confirmed on Thursday, by the Ministry of Health, which has been doing a retroactive investigation of all respiratory syndrome cases, and identified one hospitalization due to the COVID-19 disease on the fourth week of 2020. According to the most recent data released by the Ministry, Brazil has had 299 deaths caused by the coronavirus, and nearly 8 thousand confirmed cases.

The Brazilian government has restricted for thirty days the entrance of all foreigners coming from eight countries who wish to enter the country through Brazil’s land borders with Uruguay. According to a decree issued by the Ministry of Justice and Public Safety published on an extraordinary edition of the Federal Register, the restriction applies to foreigners coming from Argentina, Bolivia, Colombia, French Guyana, Guyana, Paraguay, Peru, and Suriname. On March 19th, the country had already closed its borders with these countries, following orientations passed along by the National Health Inspection Agency.

On Thursday, the United Kingdom Royal Navy announced it was dispatching some of its warships to the Caribbean in order to support the British Overseas Territories during the upcoming hurricane season, and to assist with the response to the COVID-19 pandemic if required. The news came one day after the United States government announced they were sending airplanes and ships to the region, in order to fight any drug-trafficking operations allegedly masterminded or financed by Venezuelan dictator Nicolás Maduro.