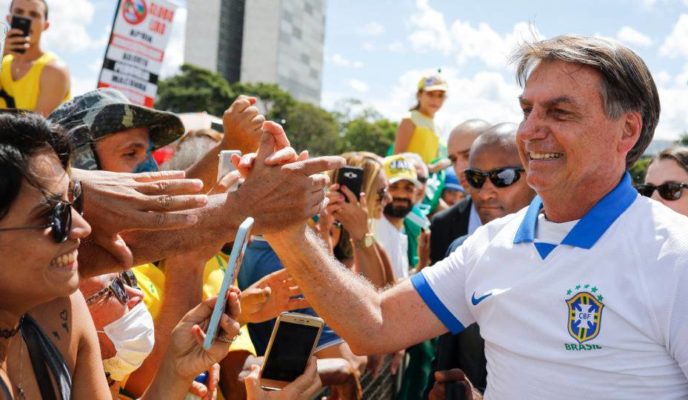 Brazilian president Jair Bolsonaro defied orders given by his doctors to remain in quarantine due to a suspected Covid-19 infection and decided to rub shoulders with pro-government demonstrators in front of the Planalto Palace on Sunday. The demonstrators themselves were already violating instructions given by the Ministry of Health, as well as the president himself, who had recorded a video discouraging people to gather in large crowds in order to avoid being infected with the novel coronavirus. The Brazilian soccer federation decided to suspend for an indefinite period of time all competitions in the country, and local state federations are expected to follow. The government of Argentina decided to shut down its borders for 15 days to prevent further coronavirus cases in the country. The number of Covid-19 cases around the world has already surpassed the number of cases inside China, epicenter of the novel coronavirus pandemic. Finally, former United States vice president Joe Biden, who is running in the primary elections for the Democratic Party to represent it in this year’s presidential elections, proposed a US$ 20 billion fund in order to “prevent Brazil from burning down the Amazon.”

Despite being ordered by his doctors to remain in isolation after several people in his entourage during the recent trip to the United States tested positive for the novel coronavirus, Brazilian president Jair Bolsonaro met his supporters outside the Planalto Palace during Sunday’s pro-government manifestations. Ignoring all medical recommendations concerning the Covid-19 pandemic, the president, along with the head of Brazil’s National Health Surveillance Agency, Antonio Barra Torres, shook hands with his supporters and held their cell phones to take selfies.  Later, Bolsonaro minimized the coronavirus pandemic, saying “it is not as bad as they say.”

The Brazilian Soccer Confederation, CBF, decided this Sunday to suspend for an indefinite period of time all competitions in the country due to the coronavirus pandemic, following examples given by its European counterparts. Starting today, all matches valid for Copa do Brasil, the Brazilian female and male national championships, the under-17 Brazilian national championship, and the under-20 Copa do Brasil have been suspended. The decision regarding local championships was left to the soccer federation of each state, but after several matches played behind closed doors, several of them decided to suspend their state championships, among them São Paulo, Rio de Janeiro, and Rio Grande do Sul. All qualifying matches for the 2022 World Cup have also been postponed indefinitely by the continent’s soccer governing body.

Argentina decides to close its borders for 15 days

On Sunday, the government of Argentina decided to shut down its borders for the next 15 days. “We have closed the borders of Argentina because the coronavirus is beginning to affect neighboring countries and because tourists who come from risk areas arrive at land borders,” explained the country’s president, Alberto Fernández. The government also determined the suspension of all kindergarten, primary, and secondary schools until March 31st. The country already has 56 confirmed cases of the novel coronavirus, and two deaths caused by Covid-19.

Coronavirus cases outside China have already exceeded those inside

More people have been affected by the novel coronavirus around the globe than in China, where the Covid-19 pandemic began. The number of cases outside Chinese borders is already over 88 thousand, while the country has registered 81 thousand cases until today, according to a survey made by Johns Hopkins University. The number of fatal victims follows the same pattern: 3,296 deaths worldwide, compared to 3,217 in China. According to newspaper China Daily, 123 cases of the disease recorded in the country were found in patients who came already infected from elsewhere in the world. 838 patients have already been discharged from Chinese hospitals, and 194 went from a more severe to a milder level of infection.

During the latest debate between pre-presidential candidates for the Democratic Party held in the United States this Sunday, former vice president Joe Biden, a member of the party’s “moderate” wing, defended the creation of a fund to obtain US$ 20 billion to fight fires in the Amazon region. According to him, the effort would be made so that Brazil “would not burn down the Amazon anymore so they can have more farms”. In an interview with Americas Quarterly published today, Biden stressed that “president Bolsonaro should know that if Brazil fails to be a responsible custodian of the Amazon rainforest, then my administration will rally the world to ensure the environment is protected.”