Fale a língua do mundo. Faça Wise Up.
Tue 24 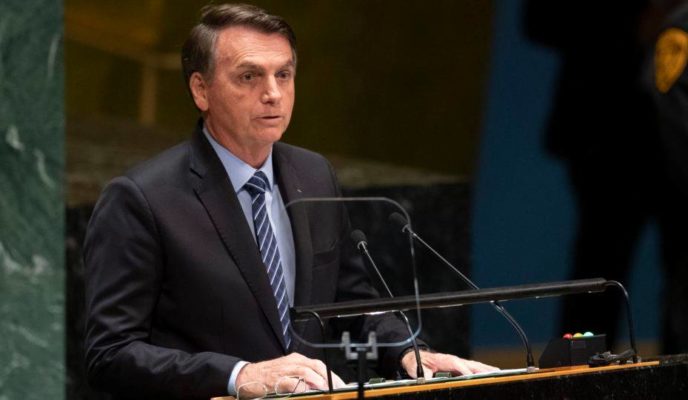 President Jair Bolsonaro gave the opening speech in the United Nations General Assembly, which is traditionally opened by a Brazilian president. Argentinian soccer superstar Lionel Messi has won the FIFA best player award for the sixth time in his career; a Brazilian mother who takes her blind son to the stadium and narrates matches to him has also won an award for “best fan”. Impeachment charges have been filed against United States president Donald Trump, concerning an accusation made against him of exchanging favors with the president of Ukraine. Finally, a Haitian senator discharged a firearm in front of that country’s Parliament, injuring two people.

President Jair Bolsonaro made a speech in New York today, keeping up with the tradition of Brazilian presidents opening the United Nations’ General Assembly meetings. In his speech, Bolsonaro attacked socialism, the Workers’ Party (PT), Cuba, Venezuela, the press, radical environmentalism, and defended his government’s stance on the Amazon issue. He also stressed that Brazil respects human rights, democracy, and freedom of religion and press, attacked French president Emmanuel Macron, and even paid a compliment to Justice minister Sergio Moro: “a symbol of our country.”

Argentinian soccer forward Lionel Messi, who currently plays for Barcelona, has overcome his long-standing rival, Juventus’s Cristiano Ronaldo, and Liverpool’s Virgil van Dijk, to win for the sixth time the title of best soccer player in the world, awarded by FIFA in a ceremony held yesterday in Italy. Messi was also running for best goal in the season, but lost to Hungarian Dániel Zsóri, who scored a magnificent bicycle kick. Goalkeeper Alisson, who plays for the Brazilian national squad and for Liverpool, won the award for world’s best goalkeeper.

At the award-giving ceremony held on Monday in Milan, Italy, by the world’s main soccer organization, FIFA, another Brazilian other than goalkeeper Alisson came out victorious: Silvia Grecco, a fierce Palmeiras supporter who takes her 12-year-old blind son, Nickollas, to the stadium and narrates the matches to him, play by play, has won FIFA’s “Best Fan” award. Silvia received a standing ovation as she was handed her trophy, and declared: “Soccer can change the lives of people. There’s too much love, too much dedication involved.”

Last week, the Washington Post revealed that a United States intelligence worker filed an anonymous accusation against president Donald Trump, claiming some sort of irregularity in higher levels of the American government. Investigative journalists have since then found out that Trump allegedly made some sort of “promise” to Ukraine’s president, Volodymyr Zelensky, involving money in exchange for an investigation on the family of Joe Biden, who is likely to be Trump’s main opposition candidate in the next presidential elections. Democrat representatives have been increasing the pressure for an impeachment, and are demanding full disclosure of conversations between both leaders.

A Haitian senator opened fire in front of that country’s Parliament on Monday, in the capital of Port-au-Prince, injuring two people. Associated Press photojournalist Chery Dieu-Nalio was shot in the face, and his driver and bodyguard, Leon Leblanc, was also injured. Senator Jean Marie Ralph Féthière fired a gun as he tried to leave the Parliament building amidst a crowd of protesters who did not accept the accession of the new prime minister, Fritz-William Michel. The population of Haiti has been protesting and blocking streets for one week against the government of president Jovenel Moise, lack of fuel, and the increasing cost of living.