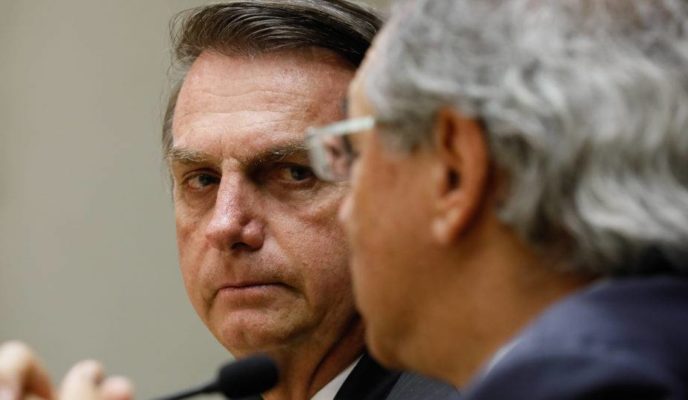 Brazilian president Jair Bolsonaro came out in defense of his Economy minister, Paulo Guedes, and said he would remain in his government “until the last day”. Meanwhile, Bolsonaro’s son, Rio de Janeiro senator Flávio Bolsonaro, is facing a request to be removed from office made by three left-wing parties after accusations of involvement with militias, money laundering, and embezzlement of public funds. Afghanistan’s president Ashraf Ghani has had his reelection officially sanctioned by the country’s Election Commission, after five months of disputes following accusations of vote-rigging by his main rival. China has expelled three Wall Street Journal reporters after the newspaper published an op-ed in which it described China as “the real sick man of Asia”. Finally, Bolivian election authorities have barred the candidacy of former president Evo Morales, who planned to run for a seat in the country’s Senate for the department of Cochabamba.

On Tuesday, Brazilian president Jair Bolsonaro came out in defense of Economy minister Paulo Guedes, during a speech made at the inauguration of Army general Braga Netto as the new Chief of Staff. Without being questioned on the subject, Bolsonaro discussed the minister’s work: “If Paulo Guedes has some occasional issues, as we all do, and he is under attack, this is much more due to his competence than to any possible slips, many of which I myself have committed in the past.” He also ensured Guedes’s permanence until the end of his term. “But I am sure that, just as he is one of the few whom I’ve known since before the elections, he will remain with us until our last day [in office],” he added.

President Jair Bolsonaro’s son, Rio de Janeiro senator Flávio Bolsonaro, is being targeted by a petition for his removal from office by members of PSOL, the Workers’ Party, and Rede, at the Brazilian Senate’s Ethics Council. In their request, the parties claim “relationship with militias”, as well as money laundering, and embezzlement of public funds through the so-called “rachadinhas”, a scheme in which Flávio Bolsonaro allegedly received a kickback of the salary paid to his employees during his term as a congressman at the Rio de Janeiro Legislative Assembly.

Ashraf Ghani has been officially re-elected as president of Afghanistan, according to the results released on Tuesday by the country’s Election Commission. Afghans took to the ballots on September 28th, and the result has since been postponed after several requests for a recount by Ghani’s main rival, Afghanistan’s Chief Executive Abdullah Abdullah, who made allegations of vote-rigging. Current vice-president Abdul Rashid Dostum, a former warlord, has also threatened to form a parallel government. The country is facing a political crisis precisely as the United States is trying to make a deal with the Taliban in order to withdraw its troops from the region.

China has revoked the credentials of three Wall Street Journal reporters who worked in Beijing. This is the first time in the post-Mao Zedong era that the Chinese government expels several journalists from a single media organization at once. The country’s Foreign Affairs Ministry attributed the decision to a recent opinion editorial published by the newspaper in February which referred to China as “the real sick man of Asia.” Josh Chin and Chao Deng, both US nationals, as well as Australian Philip Wen, were ordered to leave the country within five days. Meanwhile, opposition activists have denounced the imprisonment of jurist Xu Zihyong, who called on president Xi Jinping to resign due to his official response to the coronavirus epidemic.

Bolivia’s Supreme Electoral Court has barred the candidacy of former president Evo Morales for the country’s Senate, according to sources within Morales’s party, Movement for Socialism (MAS), to newspaper El Deber. The motives for their refusal will be officially disclosed today, according to the sources. Morales, who is currently exiled in Argentina, planned on running for the Senate for the department of Cochabamba. The courts approved MAS party candidate Luis Arce for the Bolivian presidential elections. Arce was personally appointed by Morales and, so far, has been leading the polls.