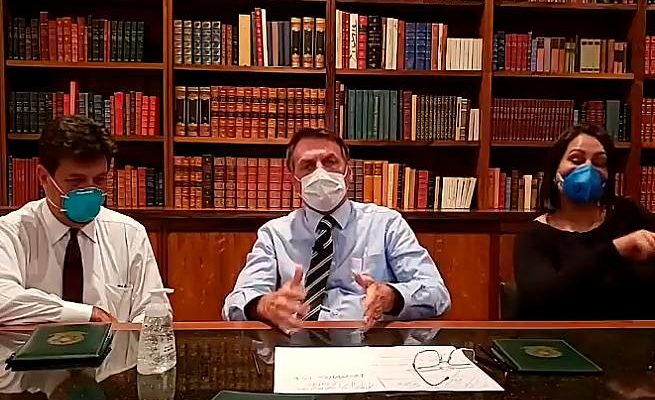 President Jair Bolsonaro and his wife, Michelle, have held tests to find out whether they are infected with the novel coronavirus, after a member of his entourage during his trip to the United States tested positive and has been quarantined. Senate president Davi Alcolumbre and other members of the Brazilian parliament are also taking the test, after being in close contact with two senators who have also taken part in the same trip with president Bolsonaro. The president’s Chief of Staff summoned a meeting with representatives from all government ministries, to discuss strategies to try to curb the spread of the disease in Brazil. Meanwhile, Argentina suspended all flights from Europe, the US, China, and all zones affected by the Covid-19 pandemic for the next 30 days. Finally, Chinese scientists have detected that long quarantine periods end up altering the coronavirus’s genetic code, and strengthening it.

Bolsonaro tested for Covid-19 after secretary gets infected

President Jair Bolsonaro held tests to find out whether he was infected with Covid-19, and appeared wearing a mask in his usual social media broadcast after a member of his cabinet, Communication Special Secretary Fabio Wajngarten, was infected with the novel coronavirus. The result of the test was negative. Bolsonaro went on national TV and radio to ask the population to remain calm, while admitting that the number of people infected in the country is likely to grow during the next weeks. He also discouraged his supporters to attend the pro-government demonstrations scheduled for Sunday all over Brazil, mentioning “serenity and common sense.”

Alcolumbre takes coronavirus tests after having contact with quarantined senators

Brazilian Senate president, Davi Alcolumbre, as well as other members of parliament, have decided to take the Covid-19 detection test after having close contact with senators Nelsinho Trad and Jorginho Mello during the last two days. Both are currently in quarantine after being part of president Jair Bolsonaro’s entourage on his trip to the United States. The test results should be released on Friday, after a slight delay due to an increase in the number of tests. Both the president and the first lady were also tested. Alcolumbre is studying the possibility of suspending the Senate’s sessions.

The Brazilian Chief of Staff will hold a meeting today with government cabinet ministers to discuss emergency actions in order to try to halt the novel coronavirus outbreak in the country. The idea is to draft a bill made up of the priorities of all different ministries and then send it to Congress during the next days. Members of the government’s Secretary General, as well as representatives of the Health, Foreign Relations, Defense, Justice and Public Safety, Economy and Agriculture ministries, as well as National Health Inspection agents, are expected to attend the meeting.

Argentina suspends flights from Europe, the US, and China, due to coronavirus

The government of Argentina decided on Thursday to suspend for 30 days all international flights coming from the most affected zones by the novel coronavirus. Brazil’s biggest neighbor and commercial partner has registered one death and three instances of local transmission, among all 31 Covid-19 disease cases. President Alberto Fernández issued a measure in the country’s press declaring a one-year health emergency state, rejecting temporary visa requests for foreigners coming from the European Union, China, South Korea, Iran, Japan, the United States and the United Kingdom.

Quarantines may strengthen coronavirus, according to studies

Chinese researchers are claiming that the mass quarantine measures imposed by their government to try to halt the spread of the novel coronavirus outbreak in the country may have altered the virus’s genetic code, making it more “treacherous” and more difficult to detect. The mutation could result in lighter symptoms of the disease, or even cause patients to show no signs of the disease during its early infection stages, according to an expert interviewed by the South China Morning Post. Zhang Zhan, from the RenMin hospital, at the University of Wuhan, says he and his colleagues began to notice a difference between the initial symptoms shown by patients hospitalized after January 23rd from those who had been previously admitted to hospitals.