Fale a língua do mundo. Faça Wise Up.
Thu 16 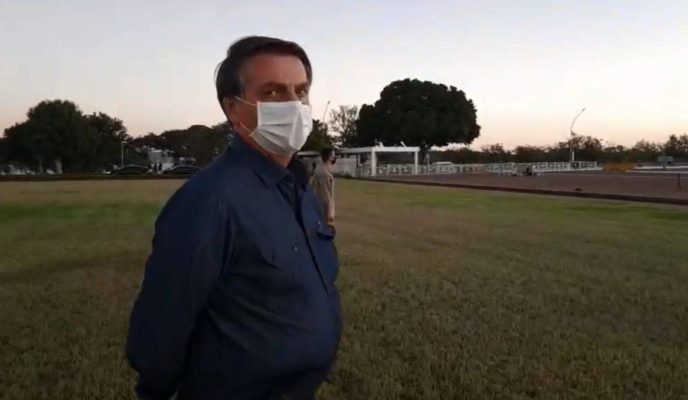 Brazilian president Jair Bolsonaro has made a new test for the novel coronavirus, and tested positive again; he will remain in isolation at the Alvorada Palace until a further test is made this coming weekend. The governor of the Brazilian state of Sergipe has also issued a statement saying he has tested positive for COVID-19, making him the ninth state governor in the country to contract the disease. The São Paulo branch of the party by which president Bolsonaro was elected, PSL, has decided to expel two of its congressmen, due to accusations that they were involved with attacks against members of the country’s Federal Supreme Court. Brazilian authorities have declared a 120-day ban on all land-clearing fires throughout the country, in an attempt to counter both internal and external criticism. Finally, one of The New York Times’s top journalists has resigned, accusing the newspaper of stooping to pressure from social media activists.

Brazilian president Jair Bolsonaro revealed in a video posted yesterday afternoon on his social media accounts that the new test he took to find out whether he was still infected with the novel coronavirus came out positive. Bolsonaro said that he will remain in isolation at the Alvorada Palace, adding that he is feeling well and that he has been taking hydroxychloroquine, prescribed by his personal physicians. He stated: “The future will tell if this drug is effective or not; for me it has been, and I give credit to it,” while stressing he did not wish his statement to be interpreted as a recommendation for people to use it without any expert supervision. A new test has been scheduled for the weekend.

The governor of the Brazilian state of Sergipe, Belivaldo Chagas, used his social media profile on Wednesday evening to announce he had tested positive for COVID-19. Chagas said he has been asymptomatic, and added he has been quarantined at his home in the state capital, Aracaju, since his diagnosis, and will resume his work duties remotely. He is the ninth Brazilian state governor to be infected by the novel coronavirus, along with Renan Filho, from Alagoas, Renato Casagrande, from Espírito Santo, Mauro Mendes, from Mato Grosso, Helder Barbalho, from Pará, Paulo Câmara, from Pernambuco, Wilson Witzel, from Rio de Janeiro, Antonio Denarium, from Roraima, and Carlos Moisés, from Santa Catarina, as well as president Jair Bolsonaro.

The São Paulo branch of PSL, Brazilian president Jair Bolsonaro’s party during his election victory, has unanimously decided to expel state congressmen Douglas Garcia and Gil Diniz. Both, who are hard-core Bolsonaro supporters, had been suspended since May and are being targeted by an ongoing inquiry of the Federal Supreme Court investigating fake news and attacks against members of the country’s Federal Supreme Court. According to a ruling by the party’s commission president, Carlos Eduardo Justo de Freitas, both “deliberately supported those who were accused by justice Alexandre de Moraes of offending and threatening him.”

Yesterday, the Brazilian government announced it issued a decree banning all land-clearing fires for a period of 120 days throughout the entire country. Exceptions have been granted for isolated and indigenous populations, who depend on traditional slash-and-burn techniques in their agricultural practices for their subsistence. Details of the measure are expected to be published in today’s edition of the Federal Gazette. The decision was made after data showed an increase in deforestation figures in the country, which have caused internal and external pressures for changes in Brazil’s environmental policies.

Bari Weiss, one of The New York Times’s major op-ed editors and writers, has been a victim of what she recently called an internal “civil war” at the newspaper, one of the United States’s main journalism institutions. In an outspoken open letter to her editor, A. G. Sulzberger, which immediately became viral on social media, Weiss declared she was quitting her job as a form of protest against the newspaper, which she claims to have failed to protect her from both external and internal bullying, and from surrendering much of its editors and reporters to the intolerance of people associated to “the ethics and mores” of Twitter, which she says has become the newspaper’s “ultimate editor.”