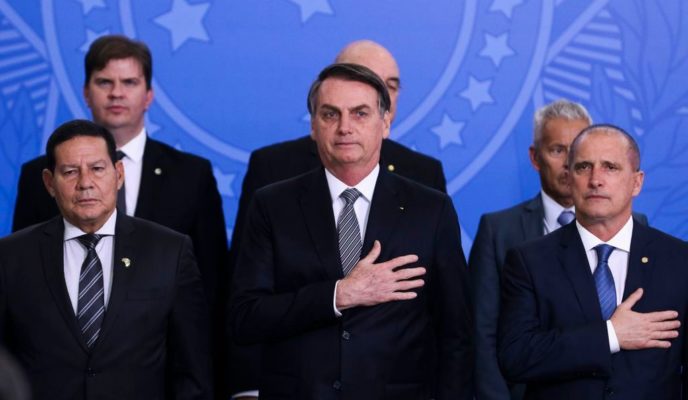 Brazilian president Jair Bolsonaro has vetoed vice-president Hamilton Mourão and Foreign Relations minister Ernesto Araújo’s presence at the inauguration of newly-elected Argentinian president Alberto Fernández; Citizenship minister Osmar Terra will be Brazil’s representative at the ceremony. Newly-released footage may clear Greek ship Bouboulina of the accusations of spilling the oil which has been washing up on Northeastern Brazil’s shores lately. Brazilian Federal Attorney General Augusto Aras has issued a report to the Federal Supreme Court stating that president Jair Bolsonaro may block whomever he wants on his social media accounts, after a congresswoman filed a lawsuit complaining that the fact that he blocked her is preventing her from having access to official government information. The massacre of an American Mormon family in Mexico has put in evidence the failure of president López Obrador’s public security policies. Finally, ride-sharing company Uber said it will invest R$ 250 million in investments to develop safety solutions in its Latin American markets.

Citizenship minister Osmar Terra will be Brazil’s representative at the inauguration of Argentina’s new president, Alberto Fernández, on December 10th. Until yesterday, vice-president Hamilton Mourão was scheduled to represent the government, but president Jair Bolsonaro allegedly vetoed his presence at the ceremony, as well as that of Foreign Relations minister Ernesto Araújo. During the elections, Bolsonaro openly supported Fernández’s rival and current president, Mauricio Macri, while Fernández called Bolsonaro “a racist” and expressed his support for the “Lula Livre” campaign, which aims at freeing from jail former president Luiz Inácio Lula da Silva.

Accused by the Federal Police of being the main suspect of spilling the oil which has been washing up in Northeastern Brazil shores during the past weeks, the Greek ship Bouboulina may not be responsible for the environmental disaster. Experts identified the footage of a large oil stain about 40 kilometers away from the shores of the state of Rio Grande do Norte on July 24th, two days before the ship passed through the area. The image was released by the Federal University of Alagoas Satellite Image Analysis and Processing Laboratory, and shows two other ships, one of which could be the source of the spillage.

Bolsonaro may block whomever he wants on social media, says Attorney General

In a report sent to the Brazilian Supreme Court, Federal Attorney General Augusto Aras defended that president Jair Bolsonaro should be able to block whomever he wants on his Twitter account. According to Aras, Bolsonaro’s social media posts do not have any “official aspect”, nor do they constitute “rights or obligations of the public administration.” Aras’s report was sent to the court after a lawsuit was filed by a federal congresswoman, Natália Bonavides, who claims that the fact that the president blocked her in August this year violates the principles of impersonality, morality, and publicity, and compromises her right to official information.

In a cruel massacre, nine members of an American Mormon family – three women and six children – were shot and burnt on Monday, on a road in the Mexican state of Sonora. The gruesome killing puts in evidence Mexico’s public safety mistakes, which have deteriorated under the leadership of president Andrés Manuel López Obrador, who promised to use social programs to address the causes behind all the violence in the country. 17 thousand people were murdered in Mexico during the first semester – 6 percent more than the previous year. One of the survivors had to walk for 20 kilometers before finding help.

Ride-sharing company Uber announced on Wednesday it will invest around R$ 250 million to develop safety solutions destined to their Latin American markets. These resources will reach the company’s São Paulo tech center throughout the next five years. In what has been described as a “pro-safety program”, the app also disclosed the launch of several tools destined to drivers and users, such as the use of artificial intelligence to detect risks, codify trips and identify passengers. All such novelties should reach all users by the first semester of 2020.