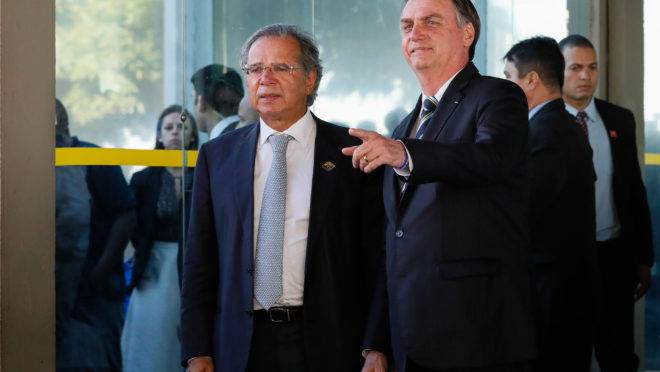 Brazilian president Jair Bolsonaro has vetoed a proposition approved by Congress which would grant amnesty on tax tributes owed by churches and religious institutions in the country. Rio de Janeiro courts authorized the resumption of classes in private schools throughout the state, three days after another decision which had banned schools from reopening. A record number of Americans who live abroad are waiving their US citizenship rights. A Fox News poll has shown Democrat presidential candidate Joe Biden with a 5-point lead over his Republican rival, current US president Donald Trump. Finally, more than 200 people have been arrested by police forces in the capital of Belarus; they were protesting against the recent reelection of president Alexander Lukashenko.

Brazilian president Jair Bolsonaro has vetoed a proposition which would grant amnesty on tax tributes owed by churches and religious institutions in the country. The measure is likely to generate a R$ 1 billion impact in the country’s public coffers. Bolsonaro heeded an appeal made by Economy minister Paulo Guedes, but the decision has caused a profound discomfort amongst the president’s supporters in the Evangelical bloc of the Brazilian Congress, which had been exerting pressure lately for the pardon of these debts. The measure is yet to be voted by the Lower House of Congress today.

Courts authorize reopening of schools in Rio on Monday

Three days after issuing a full prohibition of the resumption of normal school classes in the Brazilian state of Rio de Janeiro, the state’s Labor Court has issued a new decision authorizing private schools to resume their activities starting this Monday, as requested by the state government. The decision, issued by appellate judge Carlos Henrique Chernicharo, was the result of a lawsuit filed by the Union of Rio de Janeiro’s Basic Education Institutions, SINEPE. Within the state capital, however, all in-person classes are still banned due to another judicial decision. All schools have been closed throughout the state since March, due to the novel coronavirus pandemic.

Record number of people give up US citizenship

During the first half of 2020, 5.8 thousand people have officially renounced their United States citizenship. This figure represents a 1,210 percent increase when compared to the same period last year, when only 444 cases were registered. It is estimated that that are currently 9 million American expats throughout the world. During the Republican Party convention held last month, US president Donald Trump held a nationalization ceremony with five foreign-born individuals, during which he claimed: “You have earned the most valuable, treasured and invaluable property in the world,” Trump said. “It’s called American citizenship.” Then why so many have decided to waive this privilege? For Alistair Bambridge, one of the partners who own the company responsible for holding the survey, Trump’s government in itself is one of the main reasons: “These are mainly people who already left the US and just decided they’ve had enough of everything,” he told CNN.

The Democratic Party candidate for this year’s United States presidential election, Joe Biden, has appeared with a 5-point lead over the current president and reelection Republican candidate, Donald Trump, in a poll conducted by conservative news network Fox News. This is the first survey held for the network after the convention held by both parties in which their respective candidates were confirmed. According to the poll, Biden has 51 percent of all interviewed voters, while Trump has 46 percent. According to the survey, Biden has been favored due to his opinions on racial inequality, the approach towards the novel coronavirus pandemic, health issues, Federal Supreme Court appointments, and immigration.

Over 200 protesters arrested in Belarus

This Sunday, around 250 people were arrested during the weekly demonstrations being held against the government of Belarus in the country’s capital, Minsk. Protesters have rejected the recent reelection of president Alexandre Lukashenko, which has received the moniker of “Europe’s last dictator”, and declared himself the winner in a voting process widely held as fraudulent and condemned by most Western countries. Around 250 people have been arrested throughout the capital for waving banners, flags, and other symbols, as well as placards with “offensive messages,”, according to a statement issued by the Ministry of Interior.