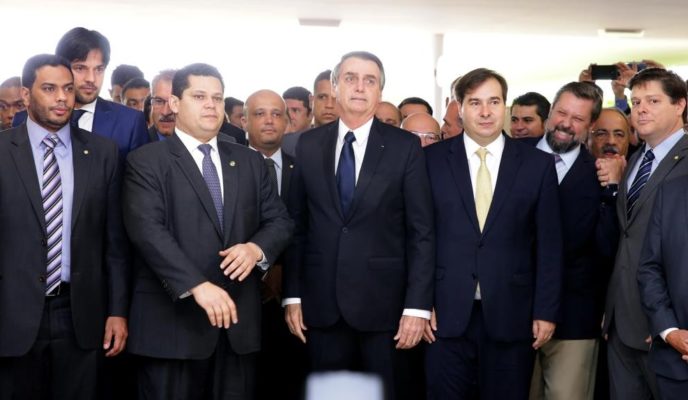 Now it’s for real. Ignoring palatial intrigues of any kind, this morning President Jair Bolsonaro went to Congress in order to put forward the utmost important Social Security Reform. He expects the bill to pass in the first semester. One may hope Bolsonaro has a better day, for his Tuesday (February 19th) was full of setbacks. Meanwhile, the defeated candidate who received R$400 thousand from Bolsonaro’s party, PSL, in the so-called PSL’s orangery scandal, was heard by the Federal Police. In Venezuela, dictator Maduro makes another dramatic maneuver to avoid humanitarian aid entering the country, closing the borders with Caribbean islands. Back in Brazil, a famous funkeira, Valesca Popozuda, upsets the LGBTQ+ community and has to cancel gigs.

This morning, President Jair Bolsonaro, oblivious to recent scandals and political gossip, went to Congress in order to show representatives how important the Social Security Reform is. With this bill, drafted by the Minister of Finance Paulo Guedes and his team, they expect to save more than R$1 trillion in ten years. The Constitutional Amendment bill (or PEC) was given to the Speaker of the House, Rodrigo Maia, who promised to fight for its approval.

Yesterday was a tough day for President Bolsonaro. He had not one but four setbacks. First, his former ally, Gustavo Bebianno, released audios revealing the nature of his talks with the president. Later, the House enforced the government’s first defeat in Congress. Then, STF Justice Marco Aurélio Mello ordered Bolsonaro to pay R$10 thousand to the representative Maria do Rosário. Finally, Bolsonaro’s nemesis, the former representative Jean Wyllys, was acquitted of accusations of having offended him.

Maria de Lourdes Paixão was heard this morning by the Federal Police. She, who had only 274 votes while running for the House, received R$400 thousand from her party, PSL – the same party as the president. Paixão is the protagonist of the so-called PSL’s orangery scandal. Despite her poor electoral performance, she received more money than the president and the representative Joice Hasselmann, who amounted more than a million votes.

Dictator Nicolás Maduro ordered the shutdown of the Venezuelan air and maritime boundaries with Curaçao, Aruba, and Bonaire islands. The alleged aim is to avoid an “invasion” of the country by foreign enemies. The true aim is to avoid the entering of humanitarian aid. As tensions escalate, a video released earlier today featured the Venezuelan Air Force testing a missile bought from Russia.

The funk singer and dancer Valesca Popozuda (“Big Booty Valesca”) is having a hard time with her audience, mostly members of the LGBTQ+ community. The reason: she met with the make-up artist Agustin Fernandez earlier this month. Fernandez is an open admirer of Bolsonaro, something that Valesca’s fans simply cannot accept. So much so that she had to cancel shows.