Fale a língua do mundo. Faça Wise Up.
Thu 17 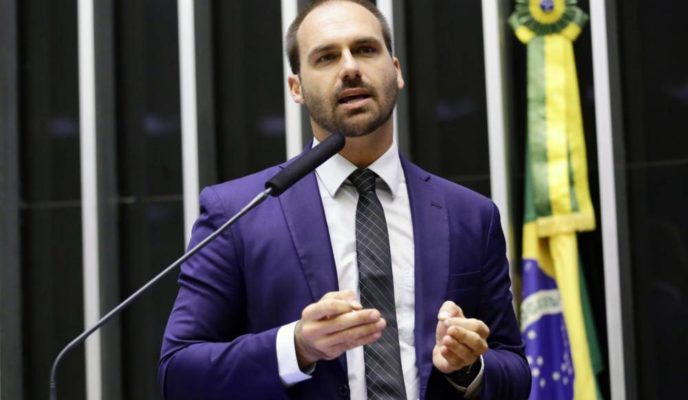 PSL, the party of Brazilian president Jair Bolsonaro, suffered a critical split last night, after Bolsonaro’s allies filed a petition to oust current party leader in the Lower House of Congress, Delegado Waldir, and replace him with the president’s son, congressman Eduardo Bolsonaro. Three United States diplomats have been removed from a train and detained in Russia near the city of Severodvinsk, close to the site of a recent explosion in a military facility. A letter from the US president Donald Trump to his Turkish counterpart, Recep Tayyip Erdoğan, has surfaced in the American media, in which Trump scolds the Middle Eastern leader and tells him not to “be a tough guy” and “a fool”. Bolivian president Evo Morales, who is seeking his third reelection on Sunday, is facing fierce protests from the indigenous community in his country after fires devastated a large part of the country’s Amazon region. Finally, Brazilian doctors have announced the introduction of a treatment already used successfully in the US and Europe which uses cancer patients’ own defense cells to cause the remission of the disease.

Yesterday, PSL members of Congress allied to Brazilian president Jair Bolsonaro filed a petition after obtaining all 27 signatures needed to destitute current party leader in the Lower House, Delegado Waldir, and elect Bolsonaro’s son, congressman Eduardo Bolsonaro, in his place. Later, however, Waldir’s allies in the party filed another petition, with 32 other signatories. Later in the evening, it was announced that the final decision would be made by the president of the Lower House of Congress, Rodrigo Maia, after checking all signatures in each petition. Delegado Waldir had been assuming a public stance against Bolsonaro after the president criticized Luciano Bivar, the party’s national president.

US diplomats are arrested in Russia near site of mysterious explosion

On Monday, three United States diplomats were removed from a train and briefly interrogated by Russian authorities in the city of Severodvinsk, near the test site in which an explosion killed five people in August. The US embassy has confirmed the incident and said that the diplomats had notified the Russian government before traveling through the area, which requires a special permit to be visited. The Russian Ministry of Foreign Relations said that the diplomats did indeed present the required documentation for the trip, but named another city as their final destination and said that they “perhaps got lost,” adding that they were willing to “present a map of Russia to the American embassy,” before releasing the diplomats.

Trump’s Erdoğan letter: “Don’t be a tough guy! Don’t be a fool!”

A letter sent by United States president Donald Trump to Turkish president Recep Erdoğan has been disclosed by Fox Business journalist Trish Regan in which he warns his Middle Eastern counterpart: “Don’t be a tough guy. Don’t be a fool!” Trump also wrote that “History will look at you favorably if you get this done the right and humane way,” referring to Turkey’s answer to the US troop pullout of Syria. The White House has confirmed the authenticity of the letter, in which Trump also asks Erdoğan to “work out a good deal.” “You don’t want to be responsible for slaughtering thousands of people, and I don’t want to be responsible for destroying the Turkish economy – and I will. (…) I have worked hard to solve some of your problems. Don’t let the world down.”

A march organized by indigenous peoples which began one month ago in Bolivia arrived yesterday in Santa Cruz de la Sierra. The protesters are demanding the revocation of a decree by the federal government which allowed controlled burns in forest areas. “Evo Morales says he is an indigenous ruler, but he is a dictator,” chief Beatriz Tapanache told AFP. Morales is seeking reelection for his fourth term in office in next Sunday’s elections. Members of the indigenous community are also demanding Morales to declare the Chiquitania region a disaster zone, due to recent forest fires. Between August and September, a huge swath of Amazon jungle in the country was devastated.

62-year-old Brazilian pensioner Vamberto Luiz de Castro had been disillusioned by doctors after facing an unsuccessful cancer treatment, but 20 days after being submitted to an experimental cellular therapy last month, exams have shown the remission of his tumor. Three other patients with advanced non-Hodgkin’s lymphoma will now undergo the same treatment at the Ribeirão Preto Clinical Hospital’s Cellular Therapy Center. The therapy is done from the patient’s own defense cells. The method has already been used successfully in the United States and Europe, and has revolutionized the treatment of this type of cancer abroad.