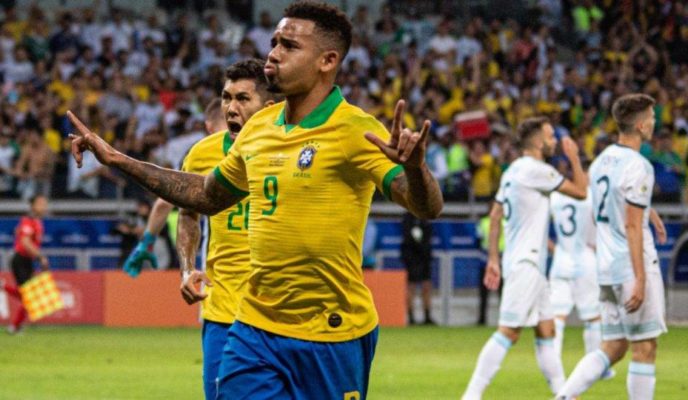 The Brazilian national soccer team defeated Argentina in a classy exhibition, and will now face the winner of the match between Peru and Chile in the Copa America final, on Sunday. French farmers took to the streets in several cities of the country to protest against the trade deal recently signed between the European Union and Mercosur. A two-year-old Brazilian child has gone missing after the mother, a Haitian immigrant, tried to cross the border between the United States and Mexico in the Rio Grande. Thousands of users all over the world have been affected by a major outage of popular social media apps Facebook, Instagram and WhatsApp. Finally, Chinese authorities have been accused by an investigation made by several Western newspapers of secretly installing espionage apps in the cell phones of tourists entering the country.

In a performance that ended with “olé” chants from the crowd, the Brazilian national soccer team beat Argentina by two goals to nil at the Mineirão stadium, in Belo Horizonte, and will play Sunday’s Copa America final. Gabriel Jesus scored the first goal, after a brilliant play by Daniel Alves, and Roberto Firmino increased the score in the second half. The last time the national team reached a Copa America final was in 2007, when the Brazilians won the title. Peru and Chile will play today to determine who will face Brazil on Sunday. The match was attended by 55 thousand people, among them injured striker Neymar and president Jair Bolsonaro.

French farmers take to the streets to protest against Mercosur deal

Farmers in several cities all over France, the European Union’s main food producer, are taking to the streets to protest against the free trade deal signed recently with Mercosur. They claim to be “outraged” by the negotiations, and that they won’t be able to compete with the lower costs of products from South America. Protests were held in front of at least 40 government buildings. The discontent was felt in the French parliament and within the government itself; in an interview, Agriculture minister Didier Guillaume said: “I will not be the minister who sacrifices French agriculture on the altar of an international agreement.”

A two-year-old Brazilian toddler disappeared in the Rio Grande, on the border between the United States and Mexico, when the child’s mother, a Haitian citizen, tried to enter the American territory illegally. The woman, whose name was not disclosed, was arrested by US authorities in Del Rio, Texas, as soon as she crossed the border, and she reported she had lost her baby during the crossing. Agents from local law enforcement agencies began a search operation for the child, aided by Mexican agents from the neighboring city of Ciudad Acuña.

Social media website Facebook and its popular platforms Instagram and WhatsApp have gone down in a simultaneous and strange outage. WhatsApp users reported being unable to download audios and images, and Instagram users have been unable to upload images or watch videos. The problem began today at around 10:30 a.m., and affected users in several countries. According to Tom Sanders, co-founder of website Downdetector, “this is by far the largest outage we have seen since (…) 2012.” In a tweet, Facebook declared: “We’ve now resolved the issues and our systems are recovering. We’re very sorry for the inconvenience and appreciate everyone’s patience.”

Chinese border officials are installing espionage apps in cell phones of tourists entering the country, according to an investigation made by newspapers The Guardian, The New York Times, and Süddeutsche Zeitung. The reports claimed that the apps extract information from the devices, such as emails, text messages, call history, and contact lists without notifying the users of its installation. The apps were installed on devices from visitors crossing the border between Kyrgyzstan and the Xinjiang region, where the Chinese government has been restricting the freedom of the local Muslim population.