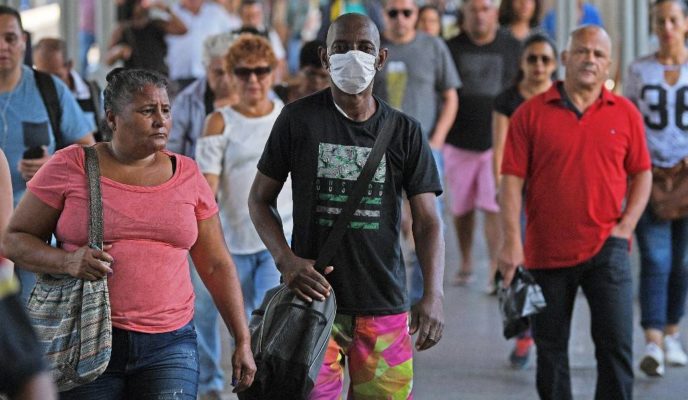 Brazil has registered its second death caused by COVID-19; after a man died in São Paulo yesterday, another one died in Niterói after being hospitalized. General Augusto Heleno, head of the Brazilian Presidency Institutional Security Office, has also tested positive for coronavirus, raising to 17 the number of people infected who traveled with president Jair Bolsonaro to the United States. Paraguay and Bolivia have shut down their borders with neighboring countries; in Bolivia, a 5 p.m. curfew has also been decreed. Meanwhile, the governments of the US and Canada have agreed to close their border for all non-essential travel. The Chinese Ministry of Foreign Affairs decided to expel journalists from several US major news outlets, after the American government decided to classify all Chinese state-run media as “foreign missions” and “propaganda outlets”. Finally, US president Donald Trump has confirmed he will be running as the Republic Party candidate in this year’s presidential elections, and former vice president Joe Biden has increased his chances of being the Democratic Party candidate after winning the primaries in Florida.

A 69-year-old man who had been diagnosed with COVID-19 died on Tuesday evening at the Icaraí Hospital, in Niterói, Rio de Janeiro, where he was hospitalized. According to O Globo, the man began to show symptoms on March 11th. The first death caused by the virus happened in São Paulo, yesterday, and the victim was a 62-year-old man. The most recent number of confirmed cases in Brazil was 367, distributed throughout 18 states and the Distrito Federal. São Paulo has the highest number of victims, with 152, and the state is currently investigating whether four other deaths have been caused by the disease.

General Augusto Heleno, minister of the Brazilian President’s Institutional Security Office, has tested positive for coronavirus. Heleno, who accompanied president Jair Bolsonaro during his recent trip to the United States, had been previously tested negative but the infection was confirmed with a second test. With this confirmation, the number of members of Bolsonaro’s US trip entourage infected with the virus has risen to 17 the number of people infected. Heleno informed that he hasn’t shown any symptoms related to COVID-19 so far.

The government of Paraguay has completely blocked the International Friendship Bridge, which connects the city of Ciudad del Este with neighboring Foz do Iguaçu, in Brazil. The commercial center of Ciudad del Este, which is usually visited by nearly 70 thousand people daily, was completely empty today. Bolivia’s interim president Jeanine Áñez, has also ordered the complete shutdown of the country’s borders, and decreed a 5 p.m. curfew. Meanwhile, the governments of the United States and Canada agreed to partially close down the border between both countries for all non-essential travel. According to US president Donald Trump, “trade will not be affected.”

China announces that it will expel American journalists

The Chinese Ministry of Foreign Affairs announced today it will not renew press credentials belonging to journalists from major US news outlets, such as The New York Times, The Washington Post, and The Wall Street Journal. The measure was justified as an answer to president Donald Trump’s decision to limit to 100 the number of Chinese citizens who can work in the US for state-run Chinese news organizations, which he called “propaganda outlets” and classified as “foreign missions”. Beijing said that it will reciprocate this treatment, and will demand these outlets, along with the Voice of America and Time magazine, to provide detailed information about their operations.

Trump confirms he will be the Republican Party candidate, Biden wins in Florida

United States president Donald Trump has confirmed he will be the Republican Party candidate during this year’s presidential elections, to be held in November. Trump’s nomination was confirmed after the primaries held in Florida and Illinois on Tuesday. Meanwhile, former US vice president Joe Biden won yesterday’s Democratic Party primaries in Florida and increased his advantage over his main rival, senator Bernie Sanders, and is close to being confirmed as Trump’s main adversary in the forthcoming elections. Biden obtained 60 percent of the votes, against Sanders’s 20 percent.