Fale a língua do mundo. Faça Wise Up.
Thu 27 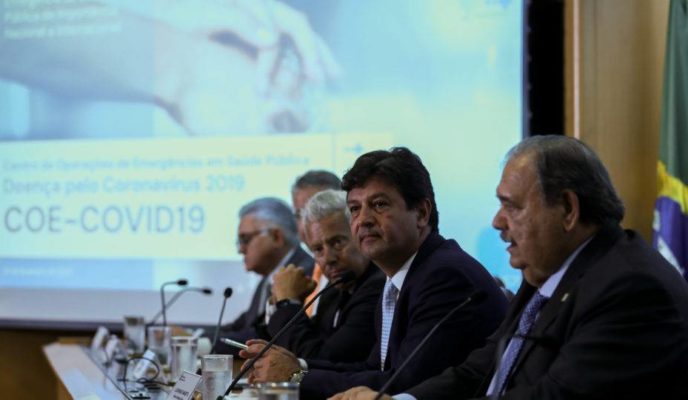 The Brazilian government has reported the first confirmed case of a coronavirus-infected patient in its territory; a 61-year-old man from São Paulo who fell ill after returning from a trip to Italy has been admitted to Albert Einstein Hospital, where he tested positive for the disease. Meanwhile, the Italian government has confirmed over 300 cases and at least 12 deaths since the epidemic reached the country; several public events have been cancelled, including sporting and art events, and a curfew has been declared on several cities. Brazilian president Jair Bolsonaro is being accused of using social media to incite his supporters to take to the streets in order to protest against the country’s Congress and its legislators. Germany’s top court has approved a law which overturns a previous ban on physician-assisted suicides for patients who suffer from incurable diseases which are causing them extreme suffering. Finally, a South Korean ship carrying 300 thousand tons of iron ore is sinking off the shore of the Brazilian state of Maranhão; local authorities are trying to find a way to rescue it without causing any damaging interference to the local environment.

On Wednesday morning, the first confirmed case of the novel coronavirus in Brazil was officially confirmed by the Ministry of Health. A 61-year-old man from São Paulo was diagnosed with the COVID-19 disease after his blood samples were analyzed by the city’s Adolfo Lutz Institute. Health minister Luiz Henrique Mandetta held a press conference to inform what has been done by the government to prevent the spread of the virus throughout the country. After arriving on Friday from a trip to Italy and meeting several family members during the weekend, the infected patient began to feel flu-like symptoms and eventually was admitted into São Paulo’s Albert Einstein Hospital, where he was tested positive for the new coronavirus.

The number of confirmed coronavirus cases in Italy has risen from 25 on Saturday to more than 300 cases on Wednesday; at least 12 people have died, and the national government has imposed a curfew in several cities. Most cases were detected in the northern region of Lombardy, around the country’s financial capital, Milan; but several other cases have been detected in other regions throughout the country, including the city of Venice – where the local world-renowned Carnival has been canceled. Several museums have been closed for visitation, and soccer matches, auto racing, fashion and art-related events have been canceled due to the risk of contagion.

Bolsonaro is accused of using the internet to undermine Congress

Brazilian president Jair Bolsonaro is being widely criticized by journalists and members of the legislative and judicial branches of government for allegedly using his WhatsApp account to spread videos calling on his supporters to take to the streets on March 15th in order to protest against “Brazil’s politicians”. In one of them, Bolsonaro says he “nearly died” to defend the country, and now asks people to defend him on the streets. In another, Bolsonaro says he “challenged the powers-that-be”, and, to the tune of the national anthem, he says he needs the support of “the Brazilian family” against “Brazil’s enemies”, namely, the “corrupt and bloodthirsty left”.

Germany’s highest court has decided to overturn a section of its criminal code which forbade all forms of physician-assisted suicide. The practice, which allows a terminally ill patient to decide whether he wants to choose to die in cases of incurable diseases and chronic pain, had been banned in 2015, but the court decreed on Wednesday the previous ruling was unconstitutional. The decision was reached after a group of doctors, patients and proponents argued that the previous legislation infringed on their constitutional right to make decisions about their own lives. According to a government spokesman, the court’s ruling will be examined before any further announcements are made.

A ship flying the South Korean flag and carrying 300 thousand tons of iron ore extracted by Brazil’s Vale is sinking off the coast of the state of Maranhão. The ship, MV Stella Banner, is anchored at around 100 kilometers from the port of Itaqui, by the state’s capital, São Luís, from where it had departed destined to Qingdao, China. According to the Brazilian Navy, the ship got stranded after a maneuver made by the captain when he realized the vessel was leaning to one side. Two leaks have been identified in the ship’s hull, and environmental experts claim the situation may pose risks to the local fauna. Efforts are being made to try to rescue both the ship and its cargo with minimum environmental damage.