Fale a língua do mundo. Faça Wise Up.
Tue 04 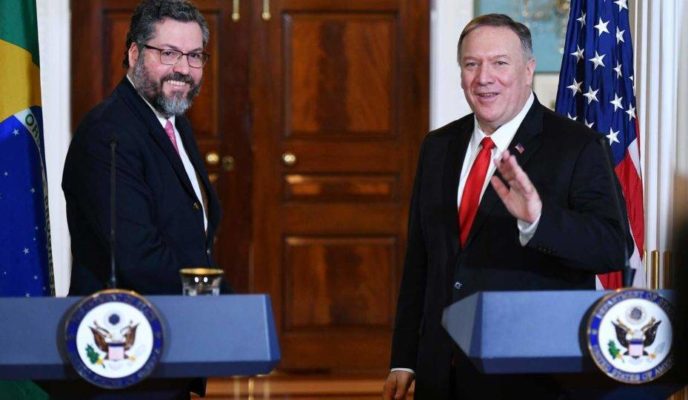 Brazil will host in its capital, Brasília, a peace conference destined for the Middle East conflict headed by the United States and called “the Warsaw Process”. President Jair Bolsonaro said in an interview to a political ally released today that he plans on shifting Brazil’s embassy in Israel from Tel Aviv to Jerusalem by 2021. Former Bolivian president Evo Morales, who fled Bolivia after accusations of election fraud and is currently living in Argentina, has been registered as a candidate for the next elections in the country, running for a senatorial office. The government of Venezuelan dictator Nicolás Maduro has barred the entry of delegates from Organization of American States inspectors in the country, practically severing the organ’s relations with the country. Finally, the office of Brazil’s Federal Appellate Prosecutor has publicly supported the sentence progression of ex-government minister Geddel Vieira Filho, sentenced to nearly 15 years in jail after approximately R$ 51 million in cash was found in his Salvador apartment.

Brasília will host, from February 4th to the 6th, what is being called among diplomats “the Warsaw Process” – a series of meetings on peace and security in the Middle East promoted by the United States and attended by delegations of dozens of countries, especially allies of the US. The initiative has been set up by US president Donald Trump’s Secretary of State Mike Pompeo, and has been publicly supported by Poland, one of the most outspoken right-wing governments in the world, and a major US ally, along with South Korea, Romania, Brazil, and other ideologically aligned countries.

President Jair Bolsonaro said he hopes to transfer Brazil’s embassy from Tel Aviv to Jerusalem by 2021. In an interview given in December last year to Evangelical preacher Silas Malafaia publicly released yesterday, Bolsonaro added that during his trip last year to the Middle East he inquired other heads of state in the region about the possible reactions of doing so, and claimed to have felt a positive response: “The feeling I have… all these conversations were private, Saudi Arabia, Qatar, United Arab Emirates, among others, only with the interpreter. Only one of them felt awkward, the others greenlighted it and added this is an internal issue for Brazil. (…) In 2021, tops, God willing, this will take place smoothly.”

Evo Morales is registered as candidate for Senate in Bolivia

Bolivian party Movement Towards Socialism informed yesterday that former president Evo Morales is among its list of candidates for the country’s next elections, scheduled for May 3rd. Morales, who is currently a self-proclaimed refugee in Argentina, wants to run for a seat in Senate representing the department of Cochabamba. Two of his party colleagues and former ministers, Luis Arce Catacora and David Choquehuanca, will take part in the election running for the offices of president and vice president respectively. If Morales wins the Senate seat, he will gain parliamentary immunity, dismissing the current lawsuits he is currently facing in his country.

The Organization of American State’s Inter-American Human Rights Commission had a visit scheduled this week to assess the country’s humanitarian situation, but the government of dictator Nicolás Maduro has refused to allow the entry of the delegation. Maduro’s Foreign Affairs minister, Jorge Arreaza, stated on Friday that Venezuela is “no longer an OAS state,” and that “at no point did the government of the Republic of Venezuela invite or allow the IAHRC to visit the country.” The OAS, on the other hand, doesn’t recognize Maduro’s legitimacy, repudiates Venezuela’s “severe and systematic human rights violation,” and considers opposition leader Juan Guaidó as the country’s legitimate representative.

The office of Brazil’s Federal Appellate Prosecutor has answered favorably to a petition made by former government minister Geddel Vieira Lima to undergo a process of sentence progression for the crimes of money laundering and conspiracy he was convicted of. The petition, requested by the Federal Supreme Court, stresses the fact that the politician has already been jailed the necessary amount of time which entitles him to make such a request. Geddel was preventively arrested in July 2017, after the Federal Police seized approximately R$ 51 million in cash in his Salvador apartment, and was sentenced in October 2019 to a 14-year and 10-month jail sentence.