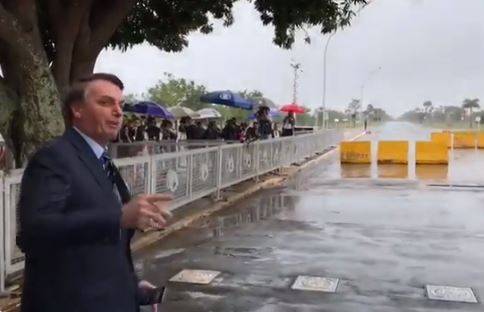 Several major Brazilian media outlets have decided to withdraw their reporters from the coverage of president Jair Bolsonaro’s official residence, the Alvorada Palace, after undergoing a daily succession of heckles and threats from the president’s supporters. Brazil has been the country in the world with the highest number of COVID-19-related deaths for the second day in a row, surpassing the United States, currently the nation most affected by the novel coronavirus pandemic, by more than 400 fatal victims. Brazil’s Senate has approved a bill which allows the federal government to requisition ICU beds in private hospitals to be used by patients using the country’s unified health system, due to the public hospital overload. After one of his posts was flagged by Twitter with a fact-check warning, United States president Donald Trump lashed out at the social network, claiming they were interfering with the 2020 presidential elections. Finally, the Pentagon is accusing Russia of covertly sending warplanes to help mercenaries supporting a rebel general in the fight against the UN-backed Libyan government.

Several Brazilian media outlets, including Folha de S. Paulo, Bandeirantes, and Organizações Globo, owner of the country’s largest TV network, have decided to withdraw their reporters from coverage of president Jair Bolsonaro’s official residence, the Alvorada Palace, after complaints of lack of security. Journalists working at the site constantly report being heckled and abused by Bolsonaro’s supporters, who gather daily at the Palace’s front gate to try to interact with the president as he leaves or comes back from his daily schedule. Attacks on journalists have intensified after the president himself decided to escalate his aggressive posture towards the press, refusing to answer questions posed by journalists from specific outlets.

Brazil leads in COVID-19 deaths for the second straight day

Yesterday, for the second consecutive day, Brazil was the country with the highest number of deaths officially caused by COVID-19 within a 24-hour period in the world. 1,039 people have succumbed to the novel coronavirus, 447 more than the United States, the nation most affected by the pandemic so far. The US is still registering a higher number of newly-detected infections, with 24,958 cases, compared to Brazil’s 16,324. As the number of COVID-19-related deaths approaches the 100,000 mark in the United States, several states have decided to loosen their social distancing and quarantine measures, opening up beaches, parks, and public spaces as summer nears and the temperature rises.

On Tuesday, the Brazilian Senate approved a bill requisitioning vacant ICU beds from private hospitals, so they can be ceded to patients infected with the novel coronavirus in order to help public hospitals managed by the country’s unified health system cope with the pandemic. According to the bill, all private and public hospitals must provide a daily report of the number of available beds, ventilators, and specify which of them are destined to COVID-19 patients. All necessary costs are to be paid to private hospitals by the federal government, but the decision of how and when to deploy the beds will be left to each governor’s discretion, according to their state’s needs.

After being flagged, Trump accuses Twitter of interfering with US elections

United States president Donald Trump has accused Twitter of interfering with the country’s presidential elections, after the social network flagged one of his tweets with a fact-check warning. “Twitter is now interfering in the 2020 Presidential Election. They are saying my statement on Mail-In Ballots, which will lead to massive corruption and fraud, is incorrect, based on fact-checking by Fake News CNN and the Amazon Washington Post,” he posted in his official account on Tuesday, adding that “Twitter is completely stifling FREE SPEECH, and I, as President, will not allow it to happen!” The social network had placed a warning on an earlier tweet by the US president in which he said that postal voting would jeopardize the 2020 presidential election.

The Pentagon has accused Russia of covertly sending at least 14 warplanes to Libya to provide support for Kremlin-backed mercenaries supporting general Khalifa Haftar’s militia, who is currently attempting to topple the internationally recognized Libyan government. In a statement released yesterday, the United States Africa Command said that the fighter jets were repainted at a base in Syria, in order to camouflage their Russian origin. The so-called Libyan National Army, headed by general Haftar, is currently fighting against the forces of the Government of National Accord, recognized by the United Nations, for power in this oil-rich Middle Eastern nation. Russian has been trying to interfere in local politics through the Wagner Group, a private military company formed by mercenaries.