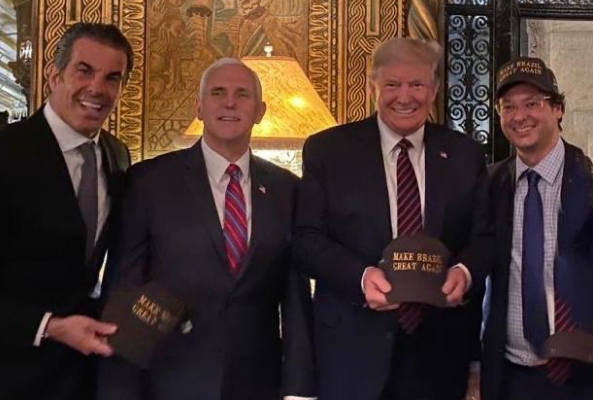 A Brazilian official present at Jair Bolsonaro’s dinner with US president Donald Trump has been tested positive for the novel coronavirus, and all members of the president’s entourage, including Bolsonaro himself, have scheduled Covid-19 tests. The World Health Organization has officially declared the novel coronavirus outbreak a pandemic, after recent developments all over the world. After the number of deaths due to the disease caused by the virus, Covid-19, in the United States, president Donald Trump held a nationwide television address in which he informed the suspension of most travel from continental Europe, and the closing of several public institutions and events, such as universities and music festivals. The United Nations estimates that the coronavirus outbreak is likely to cost US$ 1 trillion to the world’s economy; global markets are being severely affected by recent events. Finally, a professor at the University of Brasília’s Faculty of Architecture is receiving anonymous threats after reporting to local authorities the use of the institution’s facilities to sell and use drugs.

Fabio Wajngarten, Brazil’s presidential communication secretary, has tested positive for the novel coronavirus and is currently in quarantine at home. Wajngarten was a member of president Jair Bolsonaro’s entourage during the latest trip made by the Brazilian head of state to the United States, and attended a dinner with president Donald Trump, with whom he even posed for pictures. The Brazilian government has officially informed American authorities, and all officials present at the trip are being tested for the virus, including president Bolsonaro.

The World Health Organization officially declared the novel coronavirus outbreak a pandemic, during a press conference held on Wednesday, after avoiding the term for weeks. Up to March 11th, 118 thousand cases had been registered in 114 countries, with 4,291 deaths. Most of these cases were recorded in China, where the outbreak originated, but the disease caused by the virus, Covid-19, has spread with a worrying degree of intensity to South Korea, the United States, and several European countries, and is now being transmitted internally. “We have rung the alarm bell loud and clear,” said Tedros Adhanom Ghebreyesus, the WHO’s director-general. In Europe, Italy has announced a full lockdown of the country, and prime minister Conte has issued a plea for all non-essential business owners to shut down their stores and establishments until further notice, after the country saw an astonishing surge in the number of coronavirus-related deaths.

Trump suspends most travel from Europe as Covid-19 cases top 1,000

United States president Donald Trump made a public address from the Oval Office, in the White House, on Wednesday evening, detailing dramatic measures to restrict travel from Europe to the United States for the next 30 days. Exceptions will be made only to American citizens and United Kingdom nationals that receive “appropriate screenings”. The country has registered more than one thousand deaths caused by the novel coronavirus, and 18 states have declared states of emergency. The United Nations headquarters has been closed to visitors; musical festivals and public gatherings were cancelled, and most universities are switching from in-person classes to online ones.

Coronavirus likely to cost global economy US$ 1 trillion in 2020

The economic uncertainty caused by the novel coronavirus outbreak is likely to cost US$ 1 trillion to the global economy in 2020, according to the United Nations Conference on Trade and Development (UNCTAD). According to the director of the conference’s Globalization and Development Strategies division, Richard Kozul-Wright, the world economy will slow down and grow by less than two percent. According to the expert, the virus is causing instability in financial markets worldwide, concerns on the global supply chain, and uncertainty about oil prices. According to Kozul-Wright, “there’s a degree of anxiety now that’s well beyond the health scares which are very serious and concerning.”

Until Wednesday afternoon, Wild West-style “wanted” posters were still hanging from the walls of the University of Brasília, depicting the face of professor Marcos Magalhães, director of the university’s Faculty of Architecture and Urbanism. As well as threats on social media, a sort of “fireplace” with Marcos’s name has been set up inside the building. Magalhães requested, a few months ago, the cleaning and inspection of a small public space in the institution’s premises, which he claimed was being used for “external visitors to the university” to use and sell drugs, bathe in a water fountain, and even charge their cell phones in a nearby power outlet.