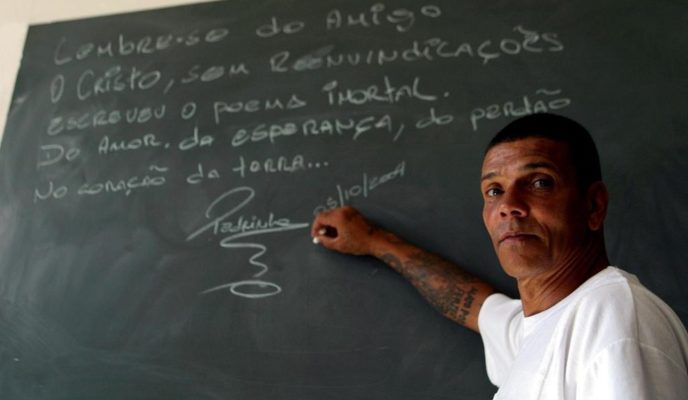 Among the topics commented by Pedrinho Matador are the deaths of the little dog in the Carrefour supermarket at Osasco, footballer Daniel, and student Rayane Alves

After 42 years in prison and over one hundred murders, 64-year-old Pedrinho Matador (“Killer Pete”) now comments crimes in YouTube videos and is preparing a documentary about his life. Out of jail for seven months now, Brazil’s greatest serial killer guarantees: he only wants peace.

Pedrinho Matador’s channel has over 28 thousand subscribers and over 2.5 million views. The idea came from his friend, 30-year-old Pablo Silva, who also produces the videos. Among the topics he comments are crimes such as the deaths of the little dog in the Carrefour supermarket at Osasco, of footballer Daniel, and of student Rayane Alves.

“These are crimes which outrage us, filled with lies, and put an end to the happiness of a person. That young woman [Rayane]… why did the security guard do that to her? She has a family, a beautiful woman, with a son. The devil makes the pot, but forgets to make the lid. Everything eventually gets found out. His conviction came out of a pen [found by the side of her body],” he says.

After spending more than four decades in prison, Pedrinho also feels responsible for warning younger people on the risks of a life of crime. “Crime is no joke. Many are entering this life because they see the branches [fame and money], and not the roots [prison and death]. It’s like the devil: what he gives with one hand, he takes away with the other. There are many young people who enter this life and, when they want to get out, it’s too late,” he says.

Among the things which do not fit the code of conduct established by Pedrinho for young people, and which disturb him deeply, are breaking bus stops, riding skateboards on sidewalks, disrespecting older people, lying to parents about where they are going. “I see all that with my eyes. It’s only drugs that are disrupting people’s lives.”

Even though most followers support the serial killer’s advices, many criticize him. Pedrinho, though, has nothing but disdain for those who enter his channel to attack him. “I laugh. These guys are all incredibly stupid, they don’t stop and think about what they’re saying. They wouldn’t last one day in all the places I’ve been. Instead of reaching out to us and talking, trying to find out who the person is, they just talk nonsense,” he says.

The killer says he feels embarrassed when he gets recognized in the streets. “I even run away, I try to hide. People come and say ‘don’t I know you from somewhere?’, and I say ‘no, not me, you must be mistaken’. But some have no shame and get close, take pictures,” he says. The harassment, however, is not completely troubling for him. “I feel happy because people might learn a bit about what they don’t know.”

The life of Pedrinho Matador is about to become a documentary. Filmmaker Bruno Santana, of the Dublês & Atores agency, has been taking the serial killer to the places where he committed his crimes, and plans to tell facts yet unknown. The story is scheduled to be ready by February.

According to Santana, Pedrinho wasn’t always a “killer”. He was Pedrinho da Cartucheira (“Cartridge Belt Pete”), after the weapon he used. The more than one hundred murders committed by Pedrinho were not enough to frighten Santana during the recordings. “He sleeps right here at the production company, and I’m cool with that. I even leave the swords next to him,” he jokes.

People who have contact on a daily basis with the serial killer are adamant that he is far from being a monster. Actress and assistant-producer Andréia dos Santos is treated like a daughter by the killer, and describes him with tenderness. “He is like a child who wants to go back to life.”

Behind his YouTube channel is 30-year-old Pablo Silva, a YouTuber himself who has been friends with Pedrinho for a long time. He is the one who determines the subjects to be commented, shops for clothes for the serial killer, and takes him to church. “I had this idea of showing the positive side of Pedro, which many people don’t know. I didn’t imagine it would get this far,” he says.

Ilana Casoy, a criminology expert and author of the book “Serial Killers: Made in Brazil”, says that Pedrinho is not a vigilante, but an avenger, who killed those whom he considered the worst of society. “When someone disobeys his code of ethics, he has his own particular solutions, which do not follow the law.”

“He ends up fascinating people. It’s a reflex of the society we have, of a country where only 10 percent of all homicides are solved. That brings along with it this distorted view,” says Ilana. “The problem is that Pedrinho’s victim did not have the right to an attorney, like he did,” she adds.

According to Ilana, a serial killer is a person who killed two or more people, with a time interval between the victims, and a ritual that involves a psychological density.

The criminologist interviewed Pedrinho, and says that what most drew her attention was his joy, his resourcefulness, and his intelligence.

“Very clear and straightforward. He doesn’t hide behind any vague lines. Despite his crimes, there is a person there, Pedro. And Pedro deserves all due respect, regardless of the crimes he committed.”

On the way to the beach in Bertioga, 103 kilometers from São Paulo, last Saturday, Pedrinho Matador was asked to take pictures and hold conversations in front of a waterfall. “They all know me, but I don’t know these people,” he says.

As soon as he stepped out of the car, it didn’t take long for Brazil’s greatest serial killer to find himself surrounded by curious people and admirers. “I am standing in front of this person, and that doesn’t impact me, because I’m neither judge nor judger to condemn the acts he committed. Perhaps he had his reasons. I’ve heard his story, and he had a difficult childhood,” said 49-year-old self-employed worker Nilton Rodrigues Alves.

When he got to the beach, where he claimed he hadn’t set his foot in decades, Pedrinho became emotional. “From inside the cell we can only see cats playing,” he says.

Pedro Rodrigues Filho, AKA Pedrinho Matador, says the world has changed a lot since he stepped foot inside a prison for the first time. When he left Mongaguá’s Penal Colony, seven months ago, he said he faced difficulties in his daily routine.

“I went through a lot of embarrassing situations until I got used to it. Even in order to catch a train at the station, I had to ask for help,” he says. Pedrinho remembers with sadness his “wartime period”, as he calls the knife battles he had inside the prison system. “God has punished me a lot. I have been very bad in my past because people have also been bad to me,” he says.

When questioned if he killed more than one hundred, Pedrinho doesn’t deny. “It might add up to that. Whenever I didn’t kill anyone, I couldn’t sleep,” he says. He claims not to regret the murders, but having entered a life of crime.

Regarding his future, the killer dreams of a quiet life, in which he can take care of a small farm, in the middle of the woods, a place he likes so much. And he wants a little more. “I didn’t want people to know me by this name anymore. Leave Pedrinho Matador alone… when people call me ‘hey, Mr. Pedro, I get very happy. Mr. Pedro, right? I want to live the rest of the life I have in peace.”