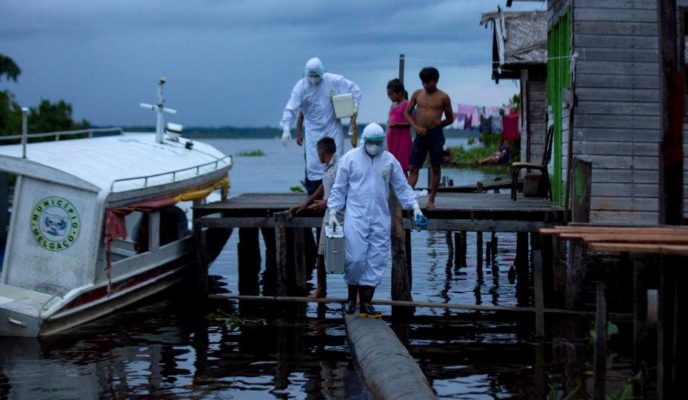 Weeks into the novel coronavirus pandemic, Brazil’s smaller cities and rural areas are beginning to bear the brunt of COVID-19 as cases begin to infiltrate these regions. According to the legal team representing Fabrício Queiroz, senator Flávio Bolsonaro’s former aide arrested on graft charges, federal prosecutors knew his whereabouts since December. After a tweet posted by president Donald Trump in his social media in which he admitted holding a meeting with Venezuelan dictator Nicolás Maduro, the White House issued a statement rejecting that Trump has lost faith in Juan Guaidó, the self-proclaimed president of South American country recognized by several countries, including the US. Two members of Trump’s election campaign team have tested positive for COVID-19 after this weekend’s rally in Tulsa, Oklahoma. Finally, due to a 1996 bilateral agreement banning the use of firearms by border patrols in the Himalaya region, the escalation of the border conflict between China and India has resulted in a primitive battle waged with improvised weapons.

Despite having a “weeks-long head start” after the first COVID-19 cases were registered in the country’s main cities, Brazil has apparently failed to contain the advancement of the novel coronavirus throughout its territory, and is now facing a delicate situation as the disease infiltrates the interior regions. According to the Regional Development Secretary for the state of São Paulo, Marco Vinholi, this weekend “interior regions have surpassed by 14.5 percent the capital in the number of registered cases,” and several of these towns are close to their full intensive care bed occupancy rate. Similar realities can be found in other Brazilian states, such as Rio Grande do Sul, where the ICU rate has increased by over 40 percent during a single week.

In a habeas corpus petition filed yesterday at the Rio de Janeiro Justice Court, the defense team of Fabrício Queiroz, a former aide to Brazilian president Jair Bolsonaro’s son, Flávio Bolsonaro, at the Rio de Janeiro Legislative Assembly, stated that their client’s whereabouts had been known by the Prosecutor’s Office since December, and that he had never been summoned to provide any statements. The document, signed by attorney, Paulo Emílio Catta Preta, was presented to request the revocation of the arrest order issued to Queiroz’s wife, Márcia de Oliveira Aguiar. Queiroz was arrested last week during a graft investigation at the Atibaia property of Frederick Wassef, a lawyer who worked for the Bolsonaro family.

Yesterday, United States president Donald Trump posted on his official Twitter account that he would be willing to meet Venezuelan dictator Nicolás Maduro “to discuss one thing: a peaceful exit from power”: “My Admin has always stood on the side of FREEDOM and LIBERTY and against the oppressive Maduro regime!” The tweet was posted, however, after Trump himself had admitted a personal meeting with the Chavista leader. “I would maybe think about that. (…) Maduro would like to meet, and I’m never opposed to meetings,” he said.

Two staff members who worked in United States president Donald Trump’s reelection presidential rally in Tulsa, Oklahoma, have tested positive for COVID-19, according to campaign communications director Tim Murtaugh. “These staff members attended the rally but were wearing masks during the entire event. Upon the positive tests, the campaign immediately activated established quarantine and contact tracing protocols,” Murtaugh told journalists. According to the Tulsa Fire Department, 6,200 Trump supporters attended the event, while the official numbers presented by the president’s campaign mention 12 thousand attendees.

China’s limited military resources at its disputed border with India

Weeks of an escalation in border provocations between China and India have resulted in a clash between patrolling troops from both countries, which left several border guards dead and many others injured in the mountainous region of Ladakh on Monday. Beijing and New Delhi exchanged accusations, and have made a compromise of cooling down local tensions. Recent events in the region have created some speculation on the possibility of a full-scale military conflict between both nuclear superpowers. Satellite images have confirmed both nations are strengthening their troop positions, without confirming some of the more extreme accusations, such as the one made by India – that Chinese troops effectively occupied Indian territory. Since a bilateral agreement signed in 1996, troops patrolling the Himalayan borders must be unarmed, which caused soldiers from both sides to use improvised weapons, such as sticks and stones.