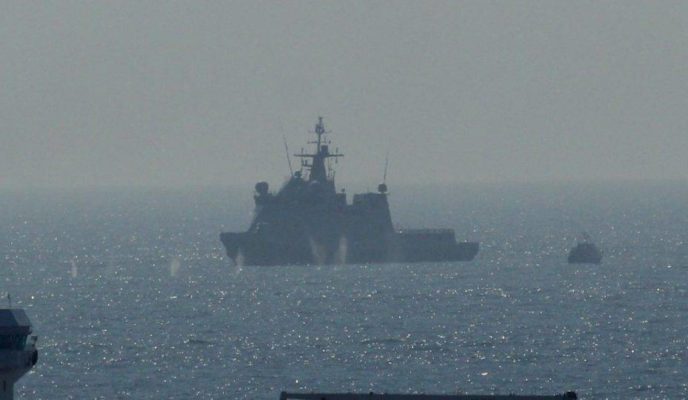 A Royal Navy patrol vessel has fired live rounds against a Spanish warship off the shore of Gibraltar, a British enclave in Spain. The incident reflects an ongoing dispute surrounding these disputed waters. In Manaus, 55 inmates have died following an inner dispute within a criminal faction that dominates penitentiaries in several northern states of Brazil. In the US, supporters of president Donald Trump have decided to begin to build sections of the wall between that country and Mexico, using internet crowdfunding to obtain money. Trump has been facing difficulties obtaining funds from Congress in order to build his coveted barrier. The Brazilian government has been wasting over R$ 10 billion on unfinished construction works, due mainly to technical mistakes and financial problems in the companies responsible for those works. Finally, parents are increasingly removing fatty ingredients from their children’s diets, something experts have been warning as extremely harmful to their health.

A Royal Navy patrol vessel fired live rounds when a Spanish warship approached the waters surrounding the British territory of Gibraltar. The incident illustrates the ongoing controversy surrounding these disputed waters, which many believe rightfully belong to Spain. HMS Sabre, a patrol vessel from the Gibraltar Squadron used live ammunition as the vastly bigger Spanish warship Audaz approached from a safe distance. The British Ministry of Defense claimed it was a planned routine military exercise.

Faction which defeated PCC is behind 55 deaths in Manaus prisons

In view of the legal deadlock concerning the funding of the wall US president Donald Trump wants to build on the border between his country and Mexico, some of his supporters announced they are building a section of the barrier using their own funds. The stretch of the wall is being built in the El Paso region, where 930 illegal immigrants are apprehended daily. The organization, called “We Build the Wall”, raised US$ 20 million on an internet crowdfunding. Local authorities, however, have already expressed their concern, since it lacks the necessary licenses and exceeds the maximum height allowed by the city’s zoning regulations.

Brazil has 14 thousand stopped construction works at a cost of R$ 10.8 billion

As well as investing only 0.4 percent of its GDP in infrastructure, the Brazilian government is wasting taxpayer money on unfinished construction works. An audit made by the Federal Accounting Court has shown that over one-third of public works funded by federal resources are at a halt, costing R$ 10.8 billion to the public coffers. Among such works are schools, nurseries, health centers, administrative buildings, sports facilities, railways, ports, and power plants. The main causes of these interruptions are technical mistakes and financial problems of the companies responsible for such works.

Parents are taking fat off of their children’s plates

Parents are increasingly removing fatty ingredients from their children’s plates, mistakenly thinking that it will result in a healthier diet. Recent studies, however, have shown that the so-called “good fats” are extremely important for the functioning of the organism and the development during early ages. Fat-free diets may result in developmental, immunological and neurological damage for small children. Experts claim that the fear of high blood pressure and obesity are responsible for this aversion, but say that the human body cannot fully develop without obtaining at least 35 percent of its energy from fat.