Fale a língua do mundo. Faça Wise Up.
Tue 29 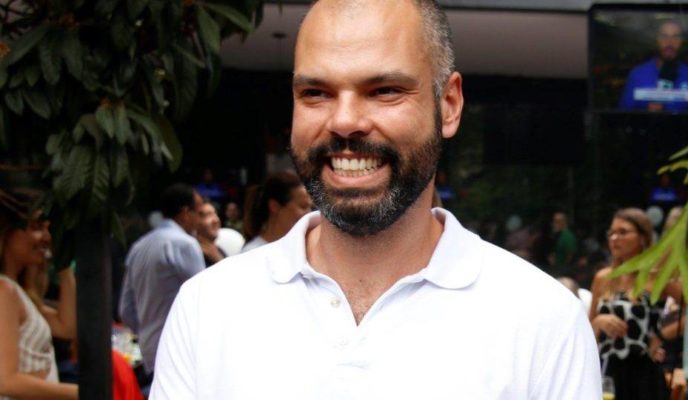 São Paulo mayor Bruno Covas has been diagnosed with cancer, after being hospitalized to treat a skin infection. Covas will begin a chemotherapy treatment, but has resumed his regular activities from his hospital room. According to a news report, the Brazilian government will spend R$ 100 thousand in palaces used by its top authorities on “premium” food destined to parrots, canaries, ostriches, and fish. At the last stop of this Asian trip, Brazilian president Jair Bolsonaro will try to lift the embargo imposed by the Saudi government on several chicken processing plants; Saudi Arabia is Brazil’s biggest chicken importer. An investigation opened by a parliamentary committee in the Brazilian Lower House of Congress has asked the indictment of former Vale president and several company executives and engineers, which they claim are responsible for the Brumadinho disaster, which left 252 people dead. Finally, Chilean president Sebastián Piñera reacted to the massive protests which rocked his country during the past days by changing eight ministers in his cabinet.

Bruno Covas is diagnosed with cancer and will undergo chemotherapy

São Paulo mayor Bruno Covas has been diagnosed with cancer in the digestive tract and will undergo a chemotherapy treatment. The information was confirmed on Monday. Covas had initially been hospitalized since last Wednesday to treat erysipelas, a bacterial infection of the skin. Bruno is the grandson of Mario Covas, former presidential candidate and governor of the state of São Paulo who died in 2001 after a long bout with bladder cancer. The politician thanked on his social media account for all messages of support he received, and resumed his regular activities from his hospital room at the Sírio-Libanês Hospital.

An official notice issued by the Brazilian government established the purchase of R$ 100 thousand in food for animals in the official residences of the presidency, in Brasília. The “top quality” feed will be destined for parrots, canaries, fish, and ostriches at the Alvorada Palace, Jaburu Palace, Granja do Torto, as well as the Planalto Palace itself. The information was reported by Época magazine, and drew attention to the “super premium” parrot feed.

In Saudi Arabia, Bolsonaro will ask for an end to the embargo on Brazilian chicken

Brazilian president Jair Bolsonaro arrived in Saudi Arabia on Monday night, at the last stop of his trip through East Asian and Middle Eastern countries. In an interview, he told journalists that among the topics discussed with Saudi authorities is their embargo on several Brazilian chicken processing plants, which has been in place since January. The country is Brazil’s biggest chicken importer. The president declared himself hopeful: “It’s like a wound, it heals, right? Who hasn’t been through a similar situation, even within their homes? It’s the same thing here. I’m sure they are over it, especially since they really like Brazil’s new government – much like the Brazilian press,” he said, ironically.

Brumadinho PCI asks indictment of former Vale president and 21 others

The Parliamentary Committee of Investigation opened by the Brazilian Lower House of Congress to investigate the Brumadinho disaster will present its final report today. In it, congressmen are asking the indictment of 22 Vale directors, as well as engineers and outsourced employees, which they deem responsible for the collapse of the Córrego do Feijão dam, in January this year. They are charged with intentional homicide and bodily injury. Among those accused in the 595-page document is the mining company’s former president, Fábio Schvartsman. 252 people died in the tragedy.

Piñera changes eight ministers in his cabinet, including his “right-hand man”

Chile’s president, Sebastián Piñera, made drastic changes in his cabinet this Monday, dismissing 8 ministers. This happened 11 days after more than one million Chileans took to the streets throughout the country, in massive protests, demanding social changes. Local newspapers stressed the departure of Interior minister Andrés Chadwick, considered to be Piñera’s “right-hand man”, as well as Finance minister Felipe Larraín and General Secretary Cecilia Pérez. According to La Tercera, these decisions “strike at the heart of the government”. Their replacements have already been announced.