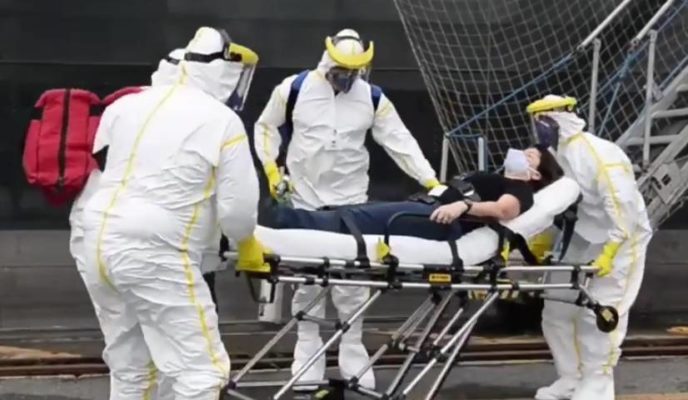 A Chinese ship carrying two crewmembers suspected of having been infected with the novel coronavirus is scheduled to dock today at the Port of Santos, and will be inspected by Brazilian health inspection officers. President Jair Bolsonaro has welcomed officials from Brazilian Supercopa winners Flamengo, and declared he will back their suggestions to amend the laws regulating soccer in the country. A Rio de Janeiro judge has overruled, for the second time, a request made by an Evangelical church to censor two Christmas specials made by comedy group Porta dos Fundos and aired by streaming giant Netflix. On Sunday, Syrian troops have made significant advancement and managed to take over most of the province of Aleppo, previously held by rebel forces. Finally, Venezuelan armed forces and Bolivarian militia held joint exercises during the weekend, in which they displayed the use a new anti-ship missile, in order to show themselves ready to fight against any foreign intervention.

A ship flying the Chinese flag carrying two crewmembers suspected of being infected with the novel coronavirus arrived on Brazilian shores on Sunday, and is scheduled to dock at the Port of Santos today. The ship, called Kota Pemimpin, is coming from Singapore and has stopped at several Chinese harbors. According to the Brazilian Health Regulatory Agency, ANVISA, the ship’s captain sent all the required documentation in order to be granted docking authorization, informing that the two individuals were showing flu-like symptoms, but have recovered since. ANVISA and Santos municipal health officials will conduct a thorough inspection of the vessel as soon as it docks.

Bolsonaro to back suggestions to amend soccer laws

Today, at the Alvorada Palace, in Brasília, Brazilian president Jair Bolsonaro welcomed Flamengo club officials. During the meeting, several suggestions were presented to make legislative changes concerning the sport. “I asked whether the issue was unanimous among other soccer clubs, and at first there seems to be an understanding of the need to change soccer laws. Several suggestions were made on how we can help to reformulate soccer in the country.” On Sunday, along with Justice minister Sergio Moro, Bolsonaro attended the Supercopa final at the Mané Garrincha stadium, in Brasília, in which Flamengo defeated Athletico Paranaense by 3 goals to nil.

5th Rio de Janeiro Civil Court judge Nathalia Magluta denied a petition issued by an Evangelical church demanding Netflix to take a 2018 Christmas special made by Brazilian comedy group Porta dos Fundos off the air from its streaming service. Pentecostal Church Brasa Viva filed a lawsuit against both companies for abusing freedom of speech and the right to the inviolability of freedom of belief and religious conscience. On her ruling, the judge mentioned a previous decision made by Federal Supreme Court justice Dias Toffoli, who allowed the exhibition of the group’s 2019 Netflix Christmas Special, in another lawsuit filed by the same church.

Syrian forces take over most of Aleppo province

Syrian government troops have made significant advancements on Sunday in the province of Aleppo, taking over most of the region previously held by rebels, one day before the scheduled talks between Turkey and Russia about the escalation of conflicts in the region. The recent advancements made by the Syrian government have shaken the fragile cooperation between Ankara and Moscow, which support opposing sides of the conflict. On Sunday, Russian warplanes made several heavy airstrikes over Aleppo.

Venezuela tested an Italian-made Otomat anti-ship missile during the “2020 Bolivarian Shield” military exercises, which mobilized thousands of troops and militia members during the weekend. A video posted on YouTube by the Bolivarian Navy shows the missile being fired by the Admiral Brión frigate and hitting a cargo ship 73 kilometers away. The test was held off the island of La Orchila, 150 kilometers from Caracas. The exercises were called for by dictator Nicolás Maduro in order to prepare Venezuela to defend themselves against a possible foreign intervention; the participation of the Bolivarian militia, however, was widely mocked on social media due to their visible lack of preparation.