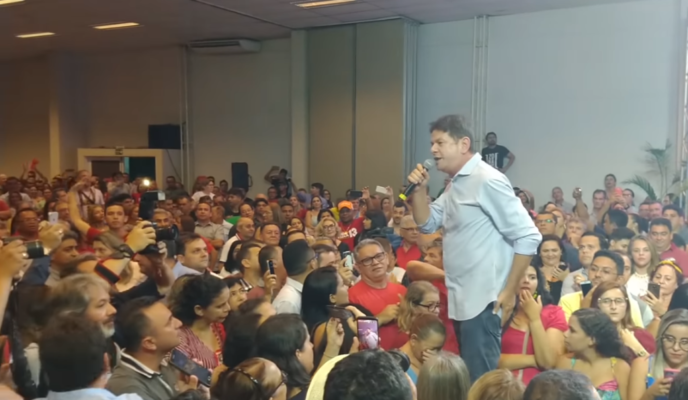 Cid Gomes (PDT) is Fernando Haddad’s (PT) very good friend.  Or so Haddad thinks. Yesterday, in a pro-Haddad Act in Fortaleza, Ciro Gomes’s brother and enfant terrible not only predicted that the PT will lose the elections, but also called the petistas “morons” for having insisted on freeing Lula. On the other side of the ring, Jair Bolsonaro (PSL) promised to extradite the Italian refugee Cesare Battisti, sentenced to life in prison in Italy. And in the middle of all that, we have artists like Regina Duarte and José de Abreu arguing about their ideological narratives, as well as Ronaldinho Gaúcho and Rivaldo, reprehended by their former club, Barcelona. Oh, and be careful not to oversleep, because the president Michel Temer changed the daylight saving time’s starting date back again.

Worried about inhibiting fake News on social media, especially on WhatsApp, and censoring even an exiled philosopher, Fernando Haddad’s campaign has forgotten the dangers of friendly fire. That’s why Cid Gomes, Ciro Gomes’s brother, felt at ease publicly criticizing the Worker’s Party’s attachment to Lula. During an event honoring Haddad, yesterday, Gomes called the petistas “morons” and said that the party has already lost the elections. Commenting, Haddad only admitted to being Cid Gomes’ friend. “It’s nothing personal,” he concluded.

Without having to worry about any friendly fire like his adversary, Jair Bolsonaro (PSL) uses his time to announce measures he would take if elected. Today he used social media to promise to extradite the Italian refugee (and, for some, a terrorist) Cesare Battisti. Battisti was condemned to life in prison in Italy, but was granted asylum by former president Lula. “We will show the world our rejection of terrorism,” he wrote, both in Portuguese and Italian.

In these extremist times, political rivalry reaches beyond the obvious political arena. Artists also argue about their ideologies, sometimes with bad results. Regina Duarte, for example, spent some time ousted for having expressed fear of the PT. Now she endorses Jair Bolsonaro and enjoys certain vindication, enraging some of her colleagues. The actor José de Abreu came forward to attack Regina Duarte and Gregório Duvivier used a photo of her with Fidel Castro to expose what he considers her “hypocrisy.”

Brazilian soccer stars are not immune to political repercussions. Ronaldinho Gaúcho and Rivaldo, both legends and idols around the world, were reprehended by their former club, Barcelona, for endorsing Jair Bolsonaro. The Catalan club wants to keep the former athletes away from events related to the institution because of their support of a candidate who “has moral values that are incompatible with the club’s.”

Try not to oversleep: Temer backs off again on daylight savings time

In a weak government, even the smallest decisions are a problem. The controversial daylight savings time was scheduled to start on November 4th. However, the country will hold a national educational exam (ENEM) with millions of students across all time zones that day. So the Ministry of Education had to ask for a postponement until the 18th. As the airlines complained, the always resolved president Temer receded again. Now it’s definitive (or so it seems): daylight savings time will start on November 4th.