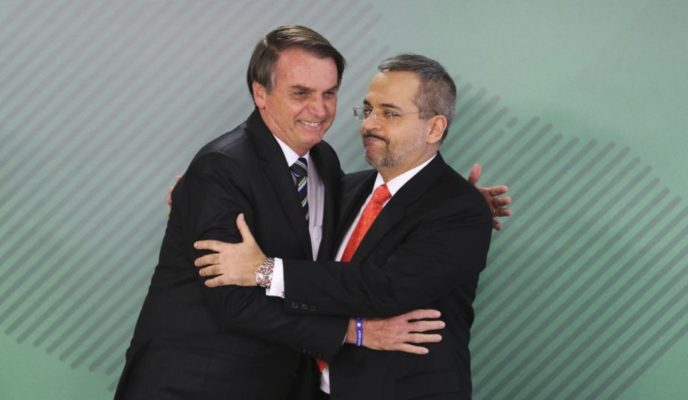 Weintraub guaranteed he will be vigilant to “everything that comes out” of the ministry, like school textbooks, and will be watching for “sabotages”

In his first interview as Education minister, Abraham Weintraub, the economist “averse to the press”, said, in an interview to O Estado de S. Paulo newspaper, he is not there [at the Ministry of Education] “to make noise”. Weintraub guaranteed he will be vigilant to “everything that comes out” of the ministry, like school textbooks, and will be watching for “sabotages”. He denies, however, that the ministry will persecute. “I am not a communist hunter.”

With news dismissals already announced by the Ministry of Education (MEC), Weintraub says that president Jair Bolsonaro (PSL) considered him “the most prepared” individual for the office, and gave him “free rein to build his team”. The order of the government, however, in the short run, after four months of crisis in the ministry, is clear: “deliver results and management.”

For the new minister, his predecessor, Colombian-born Vélez Rodríguez, “left because there was a series of delays in the schedule of deliveries.” Before accepting the ministry, Weintraub analyzed the last 11 heads of the MEC during the past 16 years, and concluded: “I am qualified”.

Is your nomination a victory for Olavo de Carvalho?

Bolsonaro is a banner. Behind him, there are several groups: monarchists, military, Evangelicals, liberals, Olavists. My brother (Arthur, presidential advisor) and I have a good relationship with all of them. I am not in that group (Olavists). Olavo has great ideas, but I don’t agree with all of them. But to claim that he has no role in the change of though Brazil is undergoing is madness.

What if Olavo criticized one of your choices at the Ministry of Education?

What can I do? I felt no pressure so far. The president gave me free rein to build my team. He asked to deliver, technically, the best results. I am not there to make noise.

What is the main problem to be faced in the education sector?

There are several things on the agenda behind schedule. Vélez left because of that, not because he was involved in any scandals or did not have the intellectual capability.

How do you propose to fight against the so-called “cultural Marxism”?

On the short run, being watchful of everything that comes out of the Ministry of Education, like school textbooks. We are concerned about leaks, about sabotages. I am not going to hunt anyone, I am not a communist hunter. I don’t like Communism, but I accept the communist. I want his redemption.

I want to convince them through logic. People are not purely and simply evil. They are involved in a lie, and that is a reality for them. We need to explain to them that this is a wrong ideology.

The strategy to prevent the return of the Workers’ Party (PT) involves education?

Without a doubt. A person who is able to read and write and has access to the internet does not vote for the Workers’ Party. Mathematics is an enemy of obscurantism. I am not against PT supporters. I have friends who voted for PT. Good people, who are not able to free themselves.

Are you in favor of reverting the approach given to the 1964 period in school textbooks?

It is time to deliver results. I don’t want to enter this debate. Evidently, there was a rupture in 1964. But it happened within the rules. Were there excesses? Yes. Did people die? Yes. Was it wrong? Yes, and unfortunately that happened. But in a single day of protests in Venezuela more people died than during that whole period. Things have to be contextualized. That was a counterrevolution. It has been documented. And it has to be written, it has to be said. Why not? When we compare it to what happened throughout Latin America, I don’t agree with calling it a dictatorship. It was a regime of exception.

There are severe learning problems in schools. Is the priority facing cultural Marxism?

Who is the patriarch of the modern Brazilian education? Paulo Freire. Did it work? Brazil spends the same amount of money as rich countries, in terms of our GDP, and our indicators are way below average. We spend a lot, and the indicators are terrible.

To say that there is a single explanation would be stupid. Let me sit down there. One agony at a time.

Will you maintain the decree imposing the phonic method in the alphabetization process?

I am building my team, and would like to have the person’s opinion on the matter. The phonic method was not in the government plan. I am comfortable with changing it, if that is the case.

Will the National Common Curricular Base be changed? Will it end?

It will be modified. Not finished. The government plan never discussed ending it. No more bumps.

The program speaks about keeping discipline in schools. What measures will be taken for that?

On the short run, we will not do anything about it. But I am in favor of following the law. If the student assaults someone, his father will be held accountable. The professor has to press charges. Call the police, the parents will be prosecuted, and, in extreme cases, the Bolsa Família program has to be withdrawn from the child’s parents, or even lose their custody. We don’t have to invent the wheel. We just need to follow the Constitution and the laws, or we will head towards barbarism. Now we are seeing a lot of “never mind”, “poor thing”. The poor thing is assaulting his teacher. If the teacher claims he does not have the support of the state, here is a message: we are the state. “Oh, but the PCC (Primeiro Comando da Capital) is responsible for that.” We need to call up mayors, Education secretaries, and face the problem. We should not just sit down and believe it will never change.

The printing company responsible for the ENEM has gone bankrupt. Will the schedule be maintained?

The population does not have to keep getting scared while we think we can deliver it on time. We will solve the issue.

What if the president asks to see the ENEM questions?

I will tell him that I guarantee there will be no problem. If the ENEM comes out all wrong, I will be the one to blame, and the president needs to either admonish me or remove me from office. This is how it works. The president has 22 ministers. He should not be wasting time with that.

What is your plan for federal universities?

Brazil spends a lot of money on them, and the scientific production with objective results for the population is too low. We need to choose better our priorities. I am not against studying philosophy, but imagine a family of farmers whose son returns from school with an Anthropology diploma? I think he would bring much more well-being for himself and for his community if he became a veterinarian, a dentist, a teacher, a doctor.

What is your point of view on affirmative action, ProUni, and FIES?

They all have to be maintained. In the short term, we cannot create a big mess. We are meddling with people’s lives. We have to make movements which do not have a tough and negative impact. Taxpayers must be respected.

Do you plan on respecting the first-place candidate in the triple list send by the universities for the position of dean?

Is it within the law?

You may choose anyone within these lists.

Perfect. It is answered then. I will choose the candidate I find most convenient. Within the law.