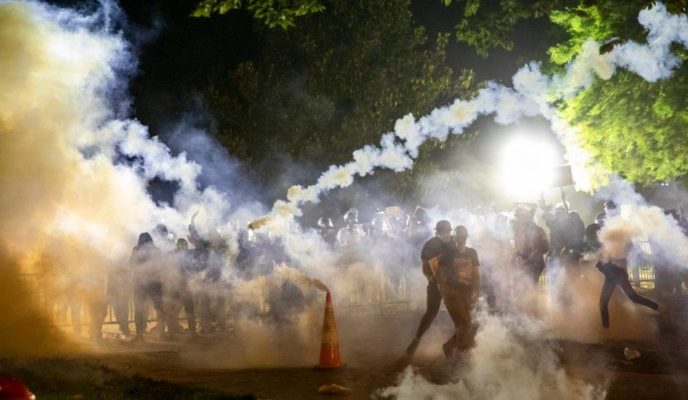 Demonstrators have defied curfews recently imposed on several US cities and held anti-racism protests, some of them violent, throughout the country. In Washington D.C., secret service agents had to take president Donald Trump into a bunker, as hundreds surrounded the White House, some of them throwing rocks. The nation is in a state of turmoil after a black man, George Floyd, was choked to death by a Minneapolis police officer. In São Paulo, members of several soccer fan groups led a march against Brazilian president Jair Bolsonaro, in defiance of local social distancing rules. The group clashed head-on with another crowd, made up of pro-Bolsonaro supporters, and the police were forced to intervene in order to prevent further violence. Former Justice and Public Safety minister Sergio Moro used his social media to answer to public criticism directed at him by president Bolsonaro; both have been feuding publicly since Moro’s dismissal weeks ago. US president Donald Trump snubbed Brazil as he listed the countries he wants to invite for the so-called “G11” meeting, in which he wants to discuss with other world leaders their relationship with China. The Chinese government, meanwhile, used the anti-racism protests in the US to point out what they described as a “double standard” by the American government, which is using violent measures to suppress their own protesters but recently issued a public statement in defense of pro-democracy activists in Hong Kong.

Yesterday, the sound of helicopters over the White House and sirens echoed throughout Washington D.C. all through the night, and secret service agents had to take United States president Donald Trump into a bunker as hundreds of protesters surrounded the building, throwing rocks. The US capital is one of 75 cities to wake up today with the scars of the worst civil turmoil in the country in decades, which broke out after the death of George Floyd, an unarmed black man killed by a police officer who knelt on his neck. Although protesters clashed with the police in several cities, in others, uniformed officers marched along with the demonstrators and even knelt, in a symbolic act of solidarity mimicking the famous gesture made by NFL players during the US anthem.

A group of protesters, led by black-clad members of soccer fan groups, held a massive march against Brazilian president Jair Bolsonaro in one of São Paulo’s main thoroughfares, Paulista Avenue, where a similar pro-Bolsonaro march was also taking place. As both groups got close to each other and clashes began, the military police used tear gas to keep the groups apart and disperse the crowds, which had grouped in violation of local distancing rules. According to the São Paulo Military Police executive secretary, Álvaro Batista Camilo, a Bolsonaro supporter carrying an allegedly neo-Nazi flag was seen approaching the rival group, which repeatedly chanted “democracy!”, sparking the conflicts. Today, state governor João Dória issued a decree prohibiting simultaneous protests from rival groups in the following weeks.

Today, former Brazilian Justice and Public Safety minister Sergio Moro used his social networks to answer president Jair Bolsonaro’s statements about him made as he left the Alvorada Palace. Once again he defended making guns more accessible to the Brazilian population, and claimed Moro had willfully ignored his decrees on the issue, “in order to make it more difficult for upstanding citizens to be able to own and bear arms. (…) This is why he was so cowardly quiet during that secret meeting. He also wanted to impose fines on people caught outdoors during the pandemic. He was aligned with a different ideology from ours, and thank God we got rid of this,” he said. Moro, in turn, said that Bolsonaro wanted to promote an armed rebellion of sorts against health measures imposed by governors and mayors.

United States president Donald Trump did not mention Brazil as he discussed the future meeting, currently being called “G10” or “G11”, to be held in order to discuss global relations with China. The meeting, initially scheduled for June, was transferred to September, since German prime minister Angela Merkel said she would not be attending due to the novel coronavirus pandemic. Besides the G7, made up of the US, Germany, Japan, France, the United Kingdom, Canada, and Italy, Trump said he wants to invite Russia, South Korea, Australia, and India.

China uses US protests to raise tensions with American government

China is accusing the government of United States president Donald Trump of adopting a double standard regarding the ongoing anti-racism protests being held throughout the states and the pro-democracy ones held in Hong Kong. “Why does the US lionize the so-called Hong Kong independence and black violence elements as heroes and activists, while calling people who protest against racism ‘rioters’?”, foreign ministry spokesman Zhao Lijian asked reporters today. The US has declared their support to Hong Kong’s demonstrators, and criticized the Chinese government for trying to curb local civil liberties. “Racism against ethnic minorities in the US is a chronic disease of American society,” he added. Ironically, his statement also indicates a double standard, since the Chinese government has been accused of repressing minorities and, during the recent COVID-19 pandemic, of discrimination against citizens from African nations.