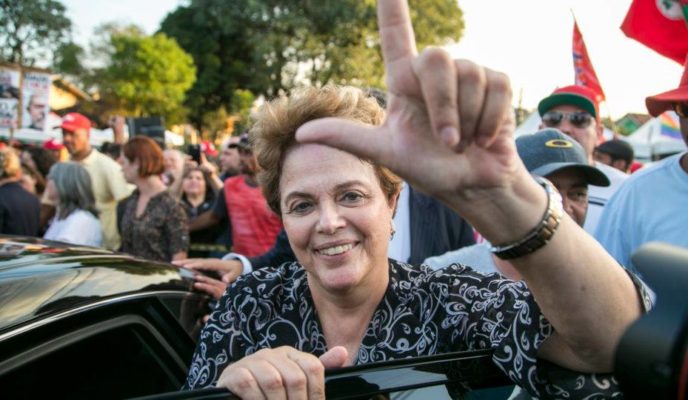 Former Brazilian president Dilma Rousseff had an arrest warrant issued against her, involving an investigation on the use of bribe money from businessmen to politicians in an exchange for support for her reelection candidacy; Federal Supreme Court justice Edson Fachin overturned the warrant. Vice-president Hamilton Mourão will be Brazil’s representative at the inauguration ceremony of newly-elected Argentinian president Alberto Fernández. The Brazilian Ministry of Economy presented a constitutional amendment bill to Congress in which it asks for the abolishment of municipalities with less than 5 thousand inhabitants, deemed as “financially unviable”. The Copa Libertadores final between River Plate and Flamengo will no longer be held in Santiago, due to the recent protests in the Chilean capital; the match will now be played in Lima, Peru. Finally, an Indian nuclear power plant has suffered a cyberattack.

Former Brazilian president Dilma Rousseff was the target of a temporary arrest warrant sent yesterday by the Federal Police to Federal Supreme Court justice Edson Fachin. The request involves an investigation on the payment of millionaire bribes from Joesley Batista’s J&F group to MDB senators, in exchange for support to her reelection candidacy. Although Rousseff herself is not one of the defendants, police authorities say her arrest was “indispensable” in order to identify sources, as well as the authorship and the materiality of the investigated crimes. Fachin, however, overruled the warrant, considering it an “extreme measure”, given that the ex-president did not present any “concrete conduct against the investigations.”

Vice-president Hamilton Mourão will be the Brazilian government’s representative at the inauguration of Argentina’s president-elect, Alberto Fernández, according to newspaper El Clarín. The inauguration will be held on December 10th, in Buenos Aires. Upon hearing news of Fernández’s election, president Jair Bolsonaro said that “Argentina chose badly,” and refused to make the traditional phone call congratulating the newly-elected official. Mourão’s presence is yet to be officially confirmed by either government.

Among the proposals in the Federative Pact presented yesterday to the Brazilian Congress by the government in a constitutional amendment bill, is the abolishment of smaller municipalities, regarded as financially unviable. According to the bill, authored by the Ministry of Economy, cities with less than 5 thousand inhabitants and a tax collection of less than 10 percent of their total revenue will be incorporated by a neighboring municipality. There are also restrictions in place for the creation of new municipalities. The bill must now be approved by votes in the Lower House and in the Senate.

South America’s soccer body CONMEBOL announced today that the single-match final of the Copa Libertadores between Argentinian club River Plate and Brazil’s Flamengo will no longer be held in Santiago, due do the weekslong wave of demonstrations in the Chilean capital. Several events have been canceled in Chile lately, including international meetings and other sporting tournaments. The match will now be held at the Monumental Stadium, in Lima, Peru, on November 23rd. The decision was made at CONMEBOL’s office in Paraguay, along with executives from both clubs and national federations. Thousands of match tickets had already been sold and hotel reservations made before the protests began.

The Nuclear Power Corporation of India Limited confirmed a cyberattack on Kundakulam Nuclear Power Plant (KKNPP), in Tamil Nadu, in September. The power plant’s administrative network was breached during the attack, but no critical damage was identified. Employees at the plant initially denied the attack and released a statement claiming that KKNPP “and other Indian Nuclear Power Plants Control Systems are stand alone and not connected to outside cyber network and Internet.” KKNPP is the biggest nuclear power plant in India, equipped with two Russian-designed and supplied pressurized water reactors with a capacity of 1,000 megawatts each.