Fale a língua do mundo. Faça Wise Up.
Mon 05 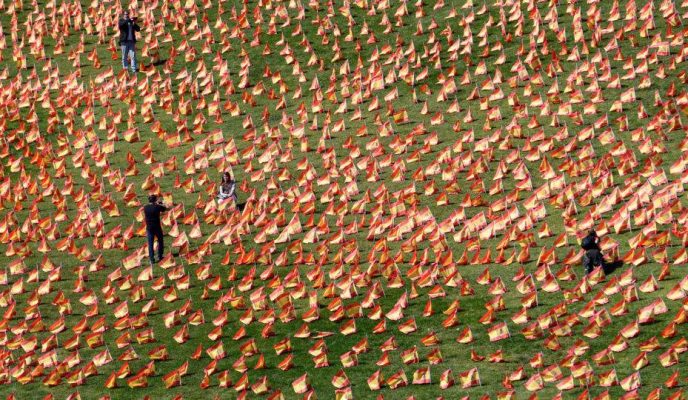 Europe has entered a new state of alert after a recent spike in the number of COVID-19 cases all over the continent, prompting several circulation restriction measures and instilling fears of a second wave. A US newspaper has claimed that president Donald Trump had already tested positive for the novel coronavirus on Thursday, but still attended a TV show before waiting for the results of a second test; the White House is expecting his release from hospital today. The Brazilian government has authorized the deployment of the country’s National Force to help the state of Mato Grosso do Sul in the fight against forest fires which have ravaged the Pantanal area for the past weeks. The Nobel Prize in Medicine has been granted to a trio of researchers responsible for discovering the virus which causes hepatitis C. Finally, Pope Francis has released his third encyclical, in which he appeals for the “rediscovery of fraternity”.

Europe enters state of alert after spike in COVID-19 cases

The drastic increase in the number of new novel coronavirus infections has prompted the government of several European countries, like France, Ireland, Spain, and Russia, to readopt severe circulation restrictions in order to try to curb a second wave of COVID-19 in the continent. According to data from the World Health Organization, since the beginning of the pandemic Europe has had 235,553 deaths caused by the virus, and 5.8 million people were infected. The government of Spain has imposed a lockdown on Madrid and nine surrounding cities; the Spanish capital currently has the highest contagion rate in Europe. Meanwhile, the French government has imposed stricter rules for bars and restaurants in the capital, Paris, which already has 36% of its intensive care beds occupied.

Sources next to the president told The Wall Street Journal that the president had already tested positive for the novel coronavirus on Thursday afternoon, but did not reveal his tests results and attended a television show while waiting for the results of a second test.  White House chief of staff Mark Meadows told FOX News today that he spoke with president Donald Trump, and said his health condition has been improving significantly. Trump has been hospitalized at the Walter Reed National Military Medical Center since Friday, when he claimed he began to feel the symptoms of COVID-19. Meadows added that the president would meet his doctors this morning in order “to make further assessments of his progress,” and said he was “optimistic”.

The Brazilian Ministry of Justice and Public Safety issued today an administrative rule authorizing the country’s National Force to act in the fight against the forest fires which have been ravaging the Pantanal region in Central-Western Brazil. The federal firefighters will initially help the state government of Mato Grosso do Sul for a period of 30 days, but this deal may be extended. On Sunday, 40 firefighters and 12 vehicles were sent to the state. As well as fighting fires, the government officials will act in “civil defense activities, protecting the environment and providing essential services to maintain the public order and the safety of people and their properties,” according to the rule.

The Nobel Assembly, at Sweden’s Karolinska Institute, announced today that this year’s Nobel Prize in Physiology or Medicine was jointly awarded to three researchers who discovered the virus which causes hepatitis C. Harvey J. Alter, Michael Houghton and Charles M. Rice have identified the blood-borne virus, which causes a chronic form of liver disease that could not be explained by the viruses responsible for causing hepatitis A and B, enabling the development of new blood tests and medications, saving millions of lives. Assembly secretary Thomas Perlmann said he had to call the winners several times before being able to contact them: “I woke them up and they were very surprised,” he said after making the announcement.

Pope Francis’s third encyclical, “Fratelli tutti”, is a call for the rediscovery of fraternity and social friendship, both mentioned in the subtitle of the text, which the Holy Pontiff signed on Saturday, October 3rd, in front of the tomb of Francis of Assisi, and released by the Vatican on Sunday, when the saint’s liturgical feast is celebrated. Saint Francis inspired Jorge Bergoglio’s own choice for his papal name, after his election, and in the encyclical, he compares the visit paid by the medieval saint to Egyptian sultan Malik al-Kamil, during the time of the Crusades, to his meeting with imam Ahmad al-Tayyeb in 2019 in Abu Dhabi. In the text, Pope Francis criticizes today’s exaggerated individualism, which erased the notion of the common good as one of mankind’s goals, and suggests the rediscovery of fraternity as the key to overcome many modern problems.