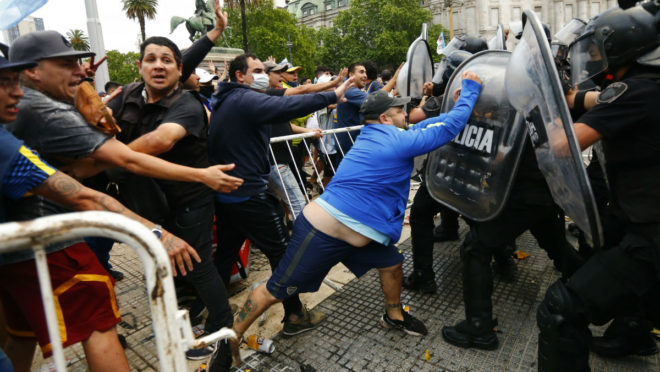 Thousands took to the streets of Buenos Aires to pay their respects to Argentina’s soccer idol Diego Maradona; a formal wake organized at the Casa Rosada, the official seat of Argentina’s president, turned into chaos after mourners attempted to trespass barricades set up by the police officers, who had to resort to rubber bullets and tear gas. The highest worldwide number of daily COVID-19-related deaths since the beginning of the novel coronavirus pandemic was reached on Wednesday; 12,785 died due to the disease within a 24-hour period, 2 thousand of them in the United States alone. Meanwhile, US president Donald Trump said yesterday that the distribution of COVID-19 vaccines is scheduled to begin next week; medical professionals and elderly people will have the priority in the vaccination process. The Brazilian Ministry of Foreign Affairs issued a formal reprimand against the Embassy of China, after Chinese diplomats publicly criticized congressman Eduardo Bolsonaro, son of president Jair Bolsonaro, who had made accusations against the Chinese government. Finally, an initial investigation on a fatal bus accident in the state of São Paulo has indicated human error to be the cause, but the driver is yet to be formally questioned, since he is hospitalized in critical condition.

Farewell to Maradona ends in clashes with riot police

Fans of soccer legend Diego Maradona and riot police officers clashed yesterday outside the Casa Rosada presidential palace, where a ceremony was being held to pay tribute to the Argentinian idol. At around 3:30 p.m., a group of people tried to trespass the barricades set up by the police in order to restrain mourners, and officers were forced to use rubber bullets and tear gas to disperse the crowd, despite appeals made by president Alberto Fernández, who appeared on the balcony. Chaotic scenes were seen all over Buenos Aires, as throngs of people crowded the streets to attend the funeral and accompany the procession which carried Maradona’s coffin to the cemetery, where he was buried next to his father and mother in a ceremony restricted to friends and family members.

On Wednesday, the world reached the highest daily number of deaths caused by COVID-19 since the beginning of the novel coronavirus pandemic. 12,785 people died due to the disease, 2 thousand of them in the United States alone. Brazil, Mexico, and several European countries such as the United Kingdom, Italy, and France, have helped to push these figures upward. The previous record had been reached on November 20th, when 11,840 fatal victims were registered. So far, the disease has already killed 1.4 million people in the world – 200 thousand in November.

United States president Donald Trump said yesterday that the distribution of COVID-19 vaccines in the country is scheduled to begin next week. According to Trump, the first ones to receive the vaccinations will be medical workers, other frontline staff, and elderly people. So far, two US companies, Moderna and Pfizer, have announced that their vaccines are fully effective at protecting people against the novel coronavirus. In his Thanksgiving address to the US Armed Forces, Trump praised the speed with which the vaccines have been created, adding that besides these two, several others were “coming up soon”: “Some people have called it a medical miracle.”

The Brazilian Ministry of Foreign Affairs has issued a formal reprimand to the Chinese embassy’s reaction to statements made against the Asian country by São Paulo congressman Eduardo Bolsonaro, son of president Jair Bolsonaro. The Brazilian diplomats called China’s attitude “offensive” and “disrespectful”, said it created “unnecessary frictions” and harmed the existing good relationship between both countries. On his social media accounts, Eduardo Bolsonaro had associated China’s government to “espionage” practices through their 5G technology, which caused outrage among Chinese authorities, who described his comments as “infamous”, following “the rhetoric of the American extreme-right”, and threatening the “normality of the China-Brazil partnership”. “It is not appropriate for diplomatic agents of the People’s Republic of China to deal with issues regarding relations between Brazil and China through their social media accounts. The diplomatic channels are open and should be used,” read the statement issued by the Ministry.

Due to the high number of casualties, a taskforce has been set up to investigate the bus accident which left 41 people dead on a highway between the cities of Taguaí and Taquarituba, in the state of São Paulo. Taguaí’s police chief, Camila Rosa Alves, has said that a preliminary inquiry indicated human error: “We are looking into the conduct of the bus driver, who is currently in critical condition. But the investigation depends on the conclusion of the forensic report from the accident site and the testimony of the witnesses who were in the accident and are also hospitalized.” The Taguaí Civil Police informed that the bus driver still hasn’t been formally questioned on the causes of the accident, but a police officer who spoke to him off the record heard him say that the brakes failed. The 55-year-old man is hospitalized with a suspected head injury.