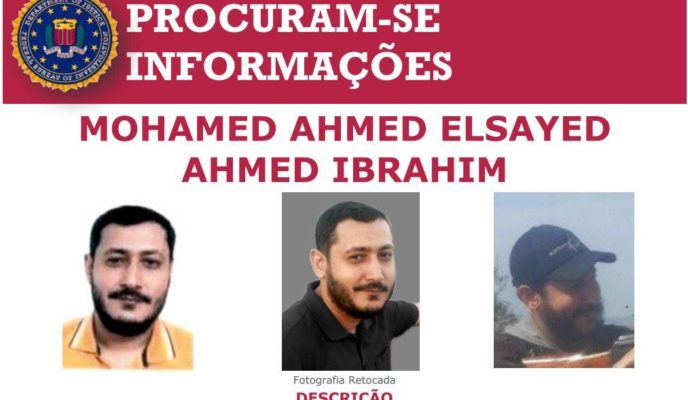 The FBI is searching for an Egyptian individual suspected of having links to Al Qaeda, who according to the Brazilian Ministry of Foreign Affairs, has been living in Brazil since last year. Anti-government protests have been scheduled in several cities throughout Brazil, with the support of the opposition and left-wing artists. Justice and Public Safety minister Sergio Moro has declared he will not run for president in the next presidential elections, contrary to what popular rumors and social media gossip have been stating lately. The French Senate has approved a bill which will allow a modern architectural reconstruction of Notre Dame Cathedral’s pinnacle, going against a previous ruling by that country’s parliament, which aimed at preserving the original outlook of the building. Finally, a French programming school with innovative methods is setting up a program in Brazil, and aims at consolidating an IT elite in the country.

The United States Federal Bureau of Investigation, FBI, is searching for an Egyptian citizen in Brazil suspected of having ties with terrorist group Al Qaeda. On Monday, the bureau disclosed its intentions of interrogating Mohammed Ahmed El-Sayed Ahmed Ibrahim on the role he allegedly had “as an Al Qaeda agent and facilitator.” 42-year-old Ibrahim is suspected of involvement in planning “attacks against the US and its interests, and providing material support for Al Qaeda since approximately 2013,” according to the FBI, which also asks for information on the suspect and warns the man is to be considered armed and dangerous. The Brazilian Ministry of Foreign Affairs said Ibrahim entered the country legally in 2018 and has been living in the country ever since.

Today, anti-Bolsonaro protests have been scheduled in major cities throughout Brazil. However, neither recent statements of Brazilian president Jair Bolsonaro praising the military dictatorship, which sparked criticism even from his allies during the election, nor the controversial episode concerning ex-president Lula’s transfer to a São Paulo penitentiary, have changed the political scenery enough to bring to the streets more people than the usual government’s opponents. Today’s protests will be mainly focused on his education policy. Demonstrations are being promoted on social media by the National Students’ Union, opposition parties, and several notoriously left-wing actors and musicians.

Moro says he will not run for president in 2022

Brazilian Justice and Public Safety minister Sergio Moro said on Monday he will not run for president in the 2022 elections. In an interview with Reuters, the minister said it is up to president Jair Bolsonaro to run for reelection “if he so wishes”. Moro also stated that he views himself as a technician with a mission within the ministry. “I particularly don’t have a partisan or political profile.” During the interview, Moro also spoke about his alleged private conversations published by investigative news website The Intercept: he stressed the need to investigate their authenticity, and said that there is “an excessive sensationalism there aiming at annulling criminal convictions.”

After the fire which destroyed part of the world-famous Notre Dame Cathedral, in Paris, France, on April 15th, the French National Assembly approved the bill establishing guidelines for the church’s reconstruction. The measure, however, is controversial; it has left some wiggle room so that a new pinnacle, with contemporary architecture features, could be erected on top of the one which has been destroyed by the fire. The decision is opposed to the one previously approved by the French Senate, which stated that the project should remain “faithful to the last known visual state,” and that any use of different material should be justified. The new measure also established a five-year deadline for the construction of the new pinnacle.

Teaching for free, French school wants to establish a programming elite in Brazil

It is wrong to think that in order to develop software and enter the world of IT it is necessary to have a university degree, or some already developed skill in the area. At least that is the premise behind the concept of École 42, a programming school which opened its second branch in the country in August. Founded in 2013 in France, and present in over 15 countries, the school is known for not charging their students a monthly fee, and for their unorthodox methodology, which eliminates the traditional method of teachers, physical classes and class schedules. The school claims its goal is to offer an educational alternative to prepare people for the digital world; they aim at an average of 200 to 350 graduates per year.