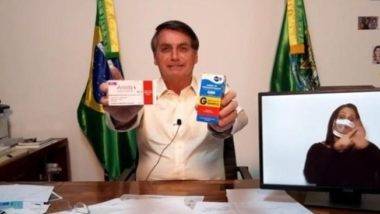 Brazil’s Federal Attorney General has opened an official inquiry regarding the production by the Brazilian government of chloroquine in order to fight the COVID-19 pandemic. United States Secretary of State Mike Pompeo is scheduled to visit the Brazilian state of Roraima today, in a public display of support to presidents Donald Trump and Jair Bolsonaro’s effort to counter the damage caused by Venezuelan dictator Nicolás Maduro to his own country. Two aircraft identified as belonging to China’s Popular Liberation Army have deliberately flown over Taiwanese airspace, after the first official visit of a United States envoy to the island nation in decades. A survey has shown a frightening growth in unawareness among young adults about the Holocaust, and the effects which the persecution imposed by Nazi Germany’s regime on Jews during World War II, and the heinous crimes they committed, have had on the world. Finally, the United States Department of Treasury has decided to impose harsh sanctions on a hacker group found to have links with the Ministry of Intelligence of the Middle Eastern nation of Iran.

The office of Brazil’s Federal Attorney General has opened a preliminary inquiry to investigate the possibility of impeachable offenses committed by Health minister Eduardo Pazuello and Defense minister Fernando Azevedo e Silva, after their public issuing of an official guideline for the production of chloroquine in order to fight COVID-19. The inquiry was opened after a formal complaint made by Workers’ Party congresswoman Natália Bonavides, in which she questioned the ministers’ administrative principle of efficiency, since there has been so far no scientific evidence showing that the drug has any efficacy against the novel coronavirus. Attorney General Augusto Aras sent the issue to the Federal Supreme Court, where justice Celso de Mello was designated as judge-rapporteur.

US Secretary of State to visit Brazil-Venezuela border

United States Secretary of State, Mike Pompeo, is scheduled to land today in Boa Vista, capital of the Brazilian state of Roraima, on a strategic trip for the government of both countries regarding their active opposition to the regime of Venezuelan dictator Nicolás Maduro. The visit will represent an even greater improvement on the current good relations held between both nations – a nod to Brazil on the eve of the forthcoming United Nations General Assembly meeting, while providing free advertisement for Donald Trump’s narrative in his quest for reelection in this year’s presidential race. Pompeo will stay in Boa Vista for a little over three hours, where he will visit a reception center for Venezuelan refugees who have fled into Brazilian territory to escape political persecution and the neighboring country’s dire economic situation, and will meet Brazil’s Foreign Relations minister, Ernesto Araújo.

Two anti-submarine aircraft identified as belonging to China’s Popular Liberation Army have entered Taiwan’s air defense identification zone, according to the island’s government defense ministry, before being warned off by the Taiwanese air force. The incident happened on Wednesday night, hours before the arrival of a United States envoy to the Asian country, under secretary for economic growth, energy and the environment Keith Krach, the highest-level official from the State Department to visit the island country in decades. China claims Taiwan is part of its territory and opposes any diplomatic relations from other countries with the local government, while the US government, despite not having officially recognized them as a country, have strong economic and informal ties with the Taiwanese. On Saturday, Krach will attend a memorial for former Taiwan president Lee Teng-hui, known as Taiwan’s “father of democracy”, and will later meet president Tsai Ing-wen.

A study made by the Conference on Jewish Material Claims Against Germany held in the United States with one thousand people between the ages of 18 to 39 in all of that country’s 50 states pointed out that one-third of them are not aware that six million Jews were killed during the Holocaust, in World War II. The organization represents Jews all over the world in negotiations for financial compensation and restitution for victims of Nazi persecution and their heirs. The survey has also shown that half of those who were interviewed could not name at least one concentration camp, and 15 percent said it was “acceptable” to hold neo-Nazi opinions.

This Thursday, the United States government imposed sanctions on a hacker group allegedly linked to Iran’s Intelligence ministry. “Masked behind its front company, Rana Intelligence Computing Company, the Government of Iran employed a years-long malware campaign that targeted Iranian dissidents, journalists, and international companies in the travel sector”, said the public intelligence alert issued by the US Department of the Treasury’s Office of Foreign Assets Control, OFAC. According to its secretary, Steven Mnuchin, “the Iranian regime uses its Intelligence Ministry as a tool to target innocent civilians and companies, and advance its destabilizing agenda around the world.” All assets in the US associated with individuals with known connections with Rana have been frozen.