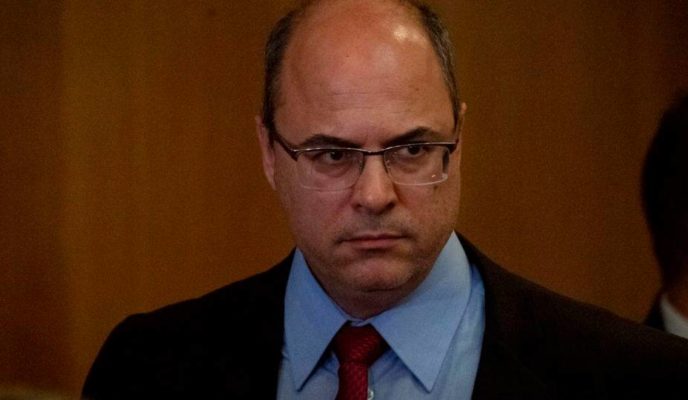 Cell phones belonging to Rio de Janeiro state governor Wilson Witzel were seized today during an operation by Brazil’s Federal Police investigating corruption involving the use of public funds in the fight against the novel coronavirus pandemic. After a week in which several members of the military issued controversial statements, Brazilian president Jair Bolsonaro held a lunch with the top commanders of all branches of the country’s Armed Forces. Amidst the chaos of the pandemic, seven out of ten soccer players in Brazil declared they would like soccer activities to come back, according to a poll made by the National Professional Soccer Athletes Federation. An advertising company has been convicted after calling former Brazilian president Dilma Rousseff “stupid.” Finally, a pro-Bolsonaro businessman, Luciano Hang, has been convicted due to his social media posts against a Campinas university dean.

Cell phones belonging to Rio de Janeiro state governor Wilson Witzel were seized today during the Brazilian Federal Police’s Operation Placebo. Twelve search and seizure warrants were served in several addresses associated with Witzel, including the governor’s official residence at the Laranjeiras Palace. The raids were made as part of a COVID-19 corruption probe, which investigates corruption involving the use of public money destined to fight the novel coronavirus pandemic in the state. Witzel issued a statement declaring his innocence, saying he was “surprised and outraged” that allies of president Jair Bolsonaro had previous knowledge of the operation, and suggesting that Bolsonaro’s intentions of interfering with the Federal Police, an accusation made by former Justice minister Sergio Moro, “were officialized.” Meanwhile, Bolsonaro congratulated the Federal Police to reporters in Brasília.

Brazilian president Jair Bolsonaro held on Monday a lunch with his Defense minister, Fernando Azevedo e Silva, and commanders of the country’s Armed Forces. The meeting, which had not been scheduled on the president’s official agenda, was held at the Ministry of Defense, and was attended by Brazilian Navy Commander, admiral Ilques Barbosa Júnior, Army Commander, general Edson Leal Pujol, and Air Force Commander, lieutenant-brigadier Antonio Carlos Moretti Bermúdez. Bolsonaro’s government has recently been involved in several controversies involving appointments of military officers to key government positions and controversial statements made by members of his administration; after Bolsonaro’s cabinet meeting was publicly released by Federal Supreme Court justice Celso de Mello, general Augusto Heleno, head of the Institutional Security Cabinet, issued a public statement mentioning “civil war,” which was subsequently backed by a group of Army reserve officers.

Even amidst the pandemic, seven out of ten players in Brazil want soccer to come back

Despite the current state of the novel coronavirus pandemic in the country, most professional soccer players want the sport to return as quickly as possible, mentioning financial needs as their main argument. Most major clubs have reduced players’ salaries, while smaller clubs were left with no income and, therefore, were unable to keep up with their financial dues. According to a poll organized by the National Professional Soccer Athletes Federation with 734 athletes throughout the country, seven out of ten soccer players in Brazil want the resumption of official matches. There are some opposing voices, however: Corinthians president Andrés Sanchez declared, in an open letter posted on the São Paulo club’s website, that he opposes resuming soccer activities in Brazil, and that the sport can’t be placed before the control of the pandemic.

The 17th Belo Horizonte Civil Court has sentenced a company that provides university entrance courses to pay a R$ 60 thousand financial compensation to former Brazilian president Dilma Rousseff for charges of pain and suffering. The company used a picture of the Workers’ Party politician in an advertising campaign for the development of new study techniques being sold under the motto “how to stop being stupid.” The company’s defense team claimed that “public people should bear the burden of having their conducts and actions subject to advertising campaigns and criticism;” judge Gislene Rodrigues Mansur, however, ruled that people should have their dignity and honor guaranteed, and saw in the ad piece an intent of ridiculing the former president.

Businessman Luciano Hang, owner of the Havan department store chain, has been sentenced by the São Paulo State Court to pay the dean of the University of Campinas (Unicamp), Marcelo Knobel, a financial compensation of R$ 20.9 thousand. The ruling was based on a pain and suffering lawsuit filed in 2019, when Hang used his social media accounts to criticize the dean for allegedly shouting out “Long Live the Revolution!” during a graduation ceremony of the institution. The incident, however, has been confirmed as fake, and Campinas 1st Tax Court judge Mauro Iuji Fukumoto disregarded the argument of businessman’s defense team, which claimed that his posts, “although erroneous, were within the scope of the protection by freedom of speech clauses.”