Fale a língua do mundo. Faça Wise Up.
Wed 30 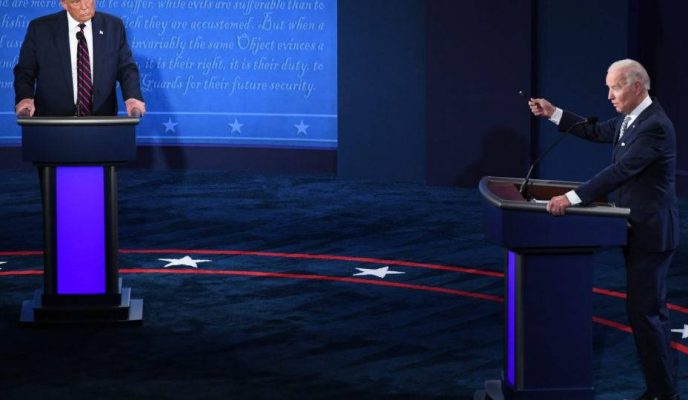 The first debate between the two candidates for this year’s United States presidential election, Republican Donald Trump, who is seeking reelection, and Democrat Joe Biden, former vice-president, ended with no clear winner. The discussion has been harshly criticized by spectators and journalists due to the excessive number of interruptions made by Trump and the aggressive outbursts made by both candidates. Brazilian president Jair Bolsonaro has sanctioned a law that will impose harsher penalties on people who commit animal cruelty. The unemployment rate in Brazil reached 13.8% in July, affecting 13.13 million people. An 89-year-old pizza delivery driver from the US state of Utah was surprised by a US$ 12 thousand tip raised by social media followers of one of his customers, who were moved by the fact that he had to work to make up for the insufficient money he received from social security. Finally, Armenia has accused Turkey of shooting down one of the country’s fighter jets, adding tension to the current military conflict waged between the Caucasian country and neighboring Azerbaijan for the Nagorno-Karabakh region.

First US presidential debate ends with no clear winner

In a chaotic, boisterous debate that has been described by a BBC journalist as “the political equivalent of a food fight”, the first of the three debates scheduled between Republican candidate Donald Trump and his Democrat opponent, Joe Biden, before this year’s United States presidential elections, ended without any clear winner. Polls and interviews held after the broadcast revealed that the public did not favor any of the candidates, and viewed the debate in an extremely unfavorable way. Trump made it nearly impossible for Biden to present any argument by constantly interrupting him – 73 times, according to a CBS News count – prompting several outbursts by the former vice-president, which culminated with a surprisingly furious outburst: “shut up, man!” Trump also constantly interrupted the moderator, FOX News journalist Chris Wallace.

Yesterday, Brazilian president Jair Bolsonaro sanctioned without any vetoes a law that will impose harsher legal penalties on people convicted of mistreating cats and dogs in the country. The crime will now be punished with a sentence of up to 5 years in prison, as well as a fine and the prohibition of owning any pets. Bolsonaro signed the bill during a ceremony in which he was photographed next to his pet dog, Nestor. Earlier this month, the president had questioned the need to increase the penalties, and said he wanted to hold a public consultation on the matter, but changed his stance during the past days, and declared: “if you don’t know how or don’t want to treat a dog or a cat with the due respect, don’t have one at home.”

Unemployment hits 13.8% in July, according to IBGE

Brazil’s unemployment rate hit 13.8% in the 2020 quarter which ended in July, according to the data obtained by the Continuous National Household Sample Survey conducted by the Brazilian Institute of Geography and Statistics. The figure represents the total number of 13.13 million Brazilians. During the same period in 2019, the country’s unemployment rate was 11.8%, while in the first quarter this year it had risen to 13.3%.

A pizzeria in the US state of Utah has a delivery driver who recently became famous in one of the most popular social networks, TikTok. 89-year-old Derlin Newey took a job delivering pizzas for a local branch of the Papa John’s chain after realizing his social security checks were not enough to pay for his bills. He would always go to the home of the Valdez family, who would ask specifically for him when placing their orders, after being captivated by his kindness and his signature phrase: “Hello, are you looking for some pizza?” and began to record his deliveries for their TikTok channel. The videos quickly became viral, prompting them to ask their followers to make a donation to help Newey. They quickly raised US$ 12 thousand, which they presented to the delivery man as a gift from his “TikTok Family”. Caught completely off guard, Newey said he didn’t even know what TikTok was, but said he was extremely grateful.

The Armenian Ministry of Defense informed yesterday that one of the country’s fighter jets, a Soviet-made SU-25, was shot down by a Turkish F-16 inside their airspace, increasing tensions in the region after the recent escalade of violence in the mountainous region of Nagorno-Karabakh, in the Caucasus. The pilot allegedly died during the incident, and became another one of the 100 victims who died during the military conflict between Armenia and neighboring Azerbaijan, which dispute the territory. Turkey, a historical ally of Azerbaijan, with whom they share ethnic ties, has denied the accusation and said Armenia should withdraw from the region, “instead of resorting to cheap propaganda tricks”.