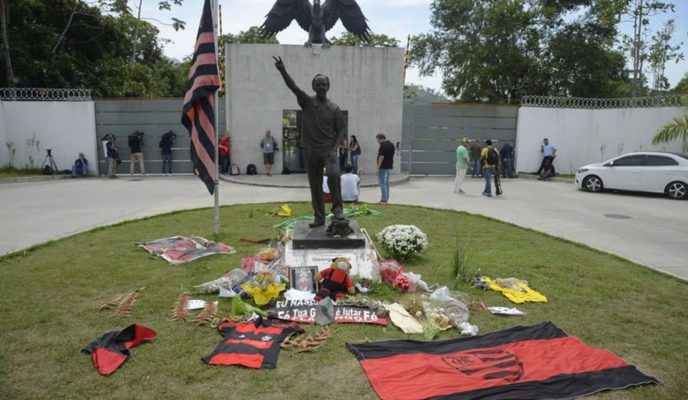 Club offers between R$ 300 and R$ 400 thousand of financial compensation and a minimum wage for the families, during a 10-year period

Flamengo and public authorities did not reach an agreement on the value of the financial compensations to be paid for the families of the young players who died in the fire at the Ninho do Urubu (“Buzzard’s Nest”) training center. Therefore, the Prosecution Office, the Labor Prosecution Office, and the Public Defender’s Office will go to the courts, to discuss a reparation for the families of the 10 players who died and the three who were injured.

Flamengo’s intention was to negotiate an agreement through the public authorities, and pay the agreed amount to the family members. The club made a proposal, but these organs rejected it, and asked for more money. After the negative answer, the club mentioned the tragedy at the Kiss nightclub, in Santa Maria (RS), to show their goodwill.

Danielle Cramer, federal labor prosecutor and member of the Conciliation Chamber, detailed the proposal. “We are seeking emotional distress claims, and also a monthly pension until the victims reached the age of 45 years. The club’s intentions were to pay for a maximum of 10 years the amount equivalent to a monthly minimum wage (currently R$ 998). The club agreed with the need to pay compensations, but we did not reach an agreement on figures,” she stated.

She also mentioned the figures offered for the emotional distress claims. “The proposal ranged according to the family members involved, but in total it was between R$ 300 and R$ 400 thousand to be paid by Flamengo. Our proposal ranged between R$ 2 million and a monthly figure of R$ 10 thousand until the players reached the age of 45. We treated differently fatal victims and those who were hospitalized with severe injuries, and those who eventually will not have any after-effects, those who merely suffered emotional damages. The other figures were lower. There was no disagreement regarding the people involved, only with the value to be paid.”

The club agreed to answer on Tuesday (19), and by 7 pm said it would not accept the proposed amount. In a statement, public authorities said that Flamengo “refused to agree to a reparation deal for the victims,” and added: “the figures proposed by the club are far below those which the institutions understand as minimally reasonable in view of the huge loss suffered by the families and all those involved.”

Without reaching an agreement, the authorities will seek a reparation through legal action. On Wednesday (20), the public defender’s office has already begun to talk to families of the players to provide them an orientation on which measures should be taken, and inform them on all negotiations held with the club.

In an official statement, Flamengo defended the way the club handled the case, pointing out it tried to reach out for the authorities with the goal of paying compensation to the families, trying to settle the matter amicably. The club also pointed out that their representatives met with representatives of the authorities to establish criteria for the negotiation, when they were requested to offer a proposal.

“On Tuesday (19), after meeting with authorities of those organs, Flamengo – regardless of any legal process – offered, in the end, a figure that is way above the standards adopted by the Brazilian courts, as a way of catering speedily to the needs of the families of these young athletes,” said the club.

“Flamengo was thoughtful enough to offer figures above those which had been stipulated by the courts in similar cases, such as the fire at the Kiss nightclub, which happened in 2013. So far, it should be pointed out, no family received any compensation.”

Cramer refuted that statement. “It is a completely different situation: in Flamengo’s case, they were all underage, lived in accommodations provided by the club, which promised to their families they would take care of these boys. At the Kiss nightclub, they were looking for entertainment, it was a completely different situation. We will now be moving on to the legal path. The Labor Prosecution Office, the Prosecution Office, and the Public Defender’s Office will file actions seeking compensations. They may be collective actions, or those families who desire to seek their compensations independently might hire private lawyers or even the Defender’s Office, which made itself available for any help.”

Lastly, the club states it reiterates its intention of holding a mediation through the Mediating Nucleus of the Rio de Janeiro Court of Justice, coordinated by appellate judge Cesar Cury, and says it will invite the families for these negotiations.